They walk among us, folks. Some of them are even pulling a cart.

For some reason, these people have so little regard for who they are as people, that they need to ‘become horses’.

And at least some of them actually believe there is some kind of an actual ‘transformation’ into ‘Pony space’ where the guy actually ‘becomes’ a horse. Which is weird, because in the same video one guy acknowledged that the bondage gear — sorry, ‘horse costumes’, bit and bridle, etc — need to be modified to accommodate humans.

Maybe that would be a clue? Nah.

Anyone who made fun of those old Renaissance Fairs probably owes those would-be knights an apology. At least they were still people while they lived out their dreams of being knights or whatever.

And do the women have a minimum weight requirement to play this game?

On that note, do we call the SPCA if we object to that skinny ‘pony’ guy pulling the enormous chick on the cart? Specifically this one. 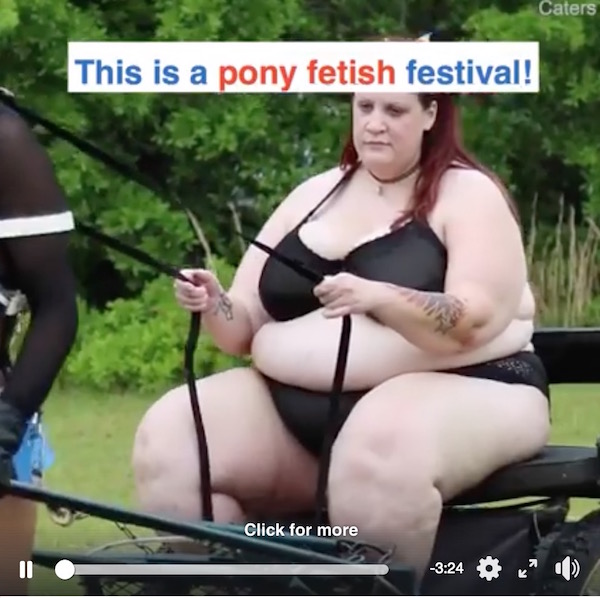 This whole scene is so unbelievably messed up. The most surprising thing about it is that it’s become an organized group of like-minded people.

Here’s a quarter, dude. Go buy yourself some self-respect.

What do you think the average voter in this crowd looks like?