And his Lawyer doesn’t want you calling him an Illegal Alien.

Cristhian Bahena-Rivera, the illegal alien from Mexico has himself an American-born baby.

If Cuomo was wondering why Trump used this issue to point out our desperate need for immigration reform, both with a secure border, and an end to chain migration, here is a good reason.

One of Mollie’s former high school schoolmates (one grade older) has borne the accused a daughter, who is now three years old. (Remember, he is thought to have lived here for ‘four-to-seven years’.)

Here is a picture of mom and baby in court. 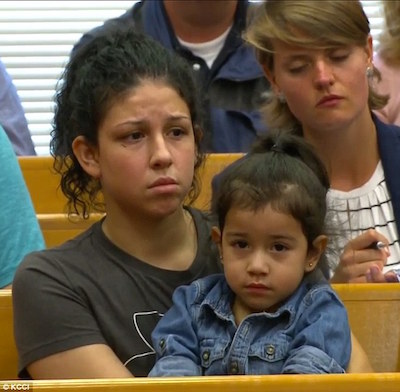 It looks like Bahena-Rivera has separated more than one daughter from a parent. That is, if you count the probable sentencing of the guy who ‘found’ her body in the trunk of his car.

But that might not be the ONLY daughter that could have been, as Trump so bluntly described it, ‘permanently separated’ from her family.

Mollie was not the first girl he was calling to from his car.

There was ANOTHER young girl — this one seventeen — who says she, too was followed by the same guy. He followed her in his car, much like he said he did with Mollie.

‘It was more flirty than sexual but my sister is very shy. She didn’t appreciate it. Even though she knew him a little she felt unsafe and didn’t want to talk to him.

‘In the end she was really creeped-out by his behavior. She had to keep telling him she wasn’t interested.’

Gibson said Rivera eventually left her sister alone and she didn’t think anything more about it until she read how the accused killer had allegedly followed Mollie in his black Chevy Malibu while she was out jogging on July 18.
Source: DailyMail

The important thing, apparently, is that we don’t call him an ‘Illegal Alien’.

Even though Breitbart has confirmed with immigration officials that he is, indeed, an illegal alien. Strange, that’s what the Democrats would say, too.

But in a 2005 Obama quote that even Snopes won’t try find some way to dismiss as ‘mostly false’, we see that at one time we all agreed about a few basic facts.

We all agree on the need to better secure the border and to punish employers who choose to hire illegal immigrants. We are a generous and welcoming people, here in the United States, but those who enter the country illegally, and those who employ them, disrespect the rule of law and they are showing disregard for those who are following the law.

We simply cannot allow people to pour into the United States, undetected, undocumented, unchecked and circumventing the line of people who are waiting patiently, diligently and lawfully to become immigrants in this country. Source: SNOPES

If you’re wondering why this is the one kind of victim Democrats have no interest in defending, let’s look back at their own internal memo from Palmieri for a possible explanation.

CAP Action’s memo says protecting DACA is not only a “moral imperative” for Democrats, it also key to getting votes.

“The fight to protect Dreamers is not only a moral imperative, it is also a critical component of the Democratic Party’s future electoral success,” reads Palmieri’s memo, obtained by The Daily Caller News Foundation.

“If Democrats don’t try to do everything in their power to defend Dreamers, that will jeopardize Democrats’ electoral chances in 2018 and beyond,” reads the memo. “In short, the next few weeks will tell us a lot about the Democratic Party and its long-term electoral prospects.”
Source: DailyCaller

Could it be that it was never about compassion, cages, or kids?

It’s all about getting the votes they need to get the political power, influence — and, in the process, money — they desperately crave.