In the quick rush to get Jeong’s racist tweets out, there were a whole bunch of other problematic ones that didn’t make the cut. Here they are…

ClashDaily reported on Sarah Jeong’s hiring at the New York Times as adding a ‘Twitter Troll’ to their ranks.

You had no idea.

She gave a lecture at Harvard titled ‘The Internet of Garbage’ — the same title as her book about online harassment, by the way — where she said this:

And the screen captures of her nasty tweets are still pouring in on Twitter.

This Twitter thread has captured hundreds of Jeong’s tweets:

"For a period of time she imitated the rhetoric of her harassers."

How big of a timeframe are we talking about, here? Because at a glance I can pull *at least* a two year timespan.

She was nasty in several ways. 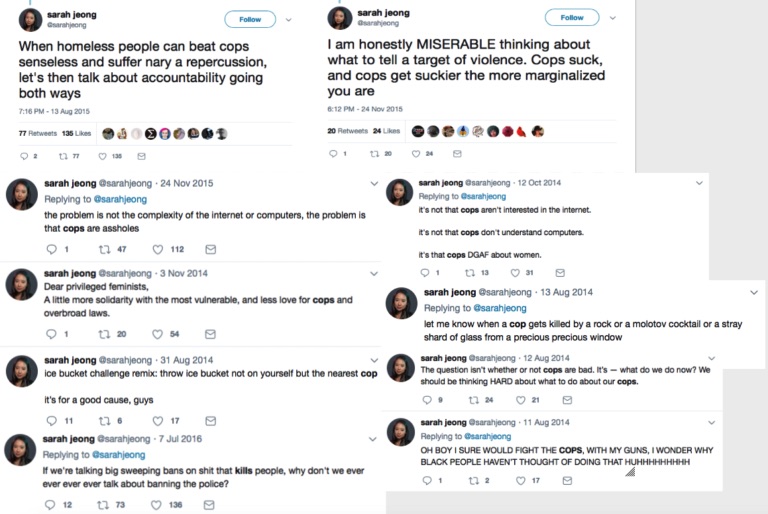 Including the ever-present ‘F*ck the police’: 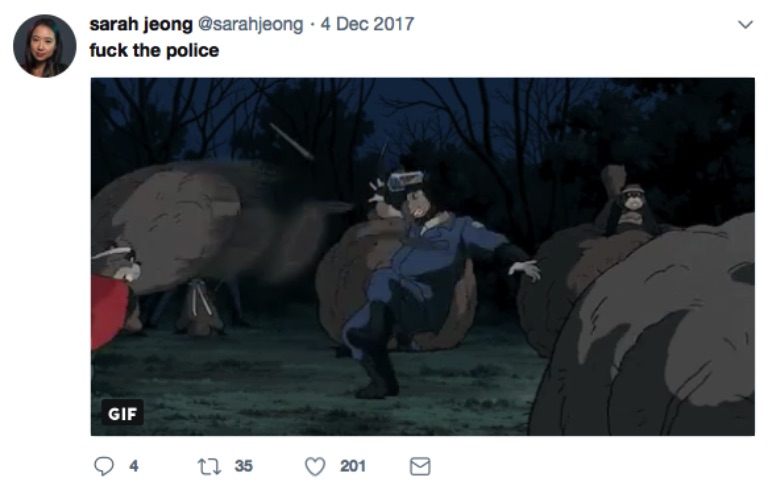 She also posted that she wanted to ‘kill all men’: 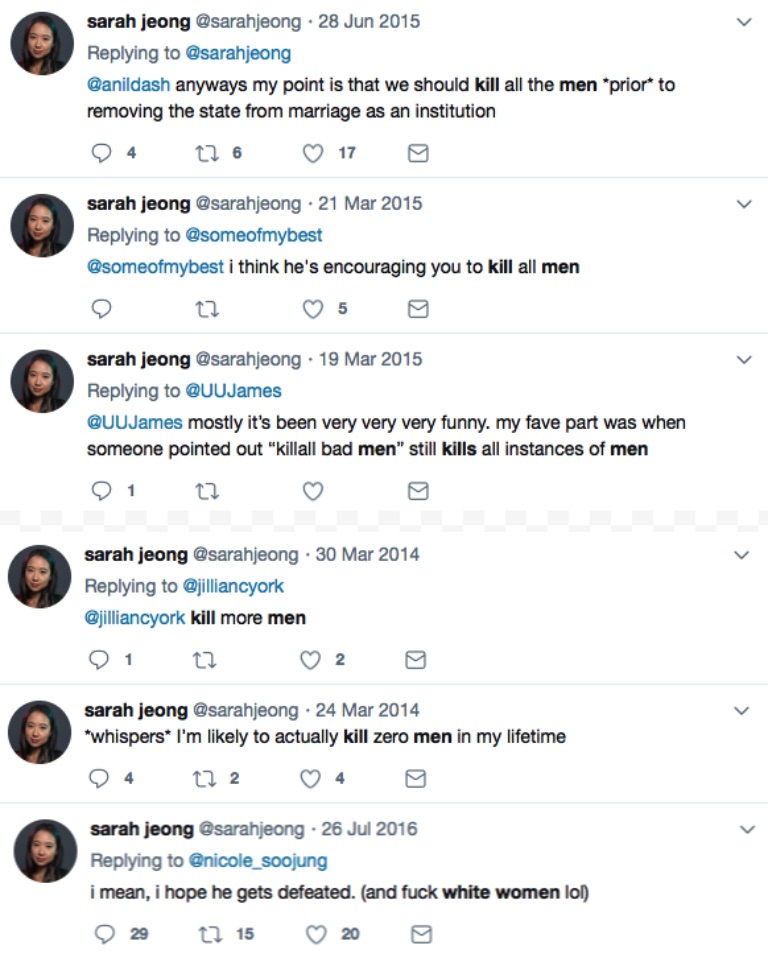 Yeah, I can see how publicly contemplating mass homicide could turn you off law enforcement.

But it’s her tweets about her new employer that is making this situation absolutely… hilarious:

Sister I’m with you. pic.twitter.com/nSdN1oPu3z

Perhaps if the NYT executives had seen those tweets she wouldn’t have been hired in the first place.

Unless they’re cool with her ‘fundamentally transforming’ the Times…

The esteemed Stephen Miller, (no, not the advisor to the President,) Stephen L. Miller, contributor to Fox News, dug up some real gems:

People trying to get Sarah Jeong fired yesterday for her racist tweets completely missed her awesome tweets about her new coworkers. NYT Christmas parties are going to be lit af pic.twitter.com/T1sPcex9Pz 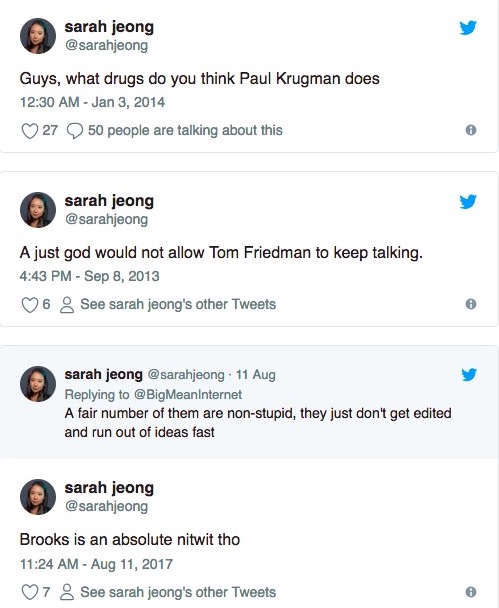 How the heck are the big names like David Brooks, Paul Krugman, and Tom Friedman going to take to the new editor, do you think?

The feeling will be mutual — after all, they’re all old, white men.

Stephen Miller then explains why we all need to think things through before demanding that she be fired.

People should really learn to have more fun with old tweets, is what I’m saying. You wanted a quick scalp. You didn’t think it through. Every man that has has to work with her at the NYT is going to have to go to work in a giant hamster ball

Jeong was an accomplished writer, a Harvard Law school graduate,  quite knowledgeable on tech issues — and a horrible person on Twitter.

This was all well known.

In yesterday’s article, I didn’t explicitly state that I thought that the New York Times can hire whomever they like. Jeong’s tweets were all out there, and if the New York Times thought that her behavior was acceptable, then that’s their choice.  If they didn’t know about them on the other hand, that’s a whole different story. That’s on them for not doing their due diligence. It might even be indicative of why the Times is being called ‘Fake News’.

Now that I’ve seen her tweets about her new co-workers, I’m happily standing by my opinion that she shouldn’t lose her job.

The problem that I have is the hypocrisy of the situation.

The Times may not have known about Jeong’s tweets. After all, they’ve ignored that kind of thing before.

In February, the New York Times hired and fired Quinn Norton within hours after it was revealed that she had posted some racial and homophobic tweets and was friends with a white nationalist.

Why is the NYT standing by Jeong and ditching Norton?

Let’s hope it’s not because Jeong is South Korean and Norton is a ‘white girl’ — but you never know. It is the New York Times, after all.

There’s this whole issue of careers being ruined over a tweet.

Think about that… most of those are slightly edgy/funny throwaway statements that people make to get likes and retweets. Social media — and Twitter, in particular — is set up to make us want to do that.

There seems to be an uncomfortable relationship with someone’s political affiliation and the likelihood that they’ll be terminated from their employment over a tweet.

Not surprisingly, Sarah Jeong wasn’t a fan of Republicans:

The new face of @nytimes pic.twitter.com/Q6jkv49pGc

The list of famous people that have been fired from their jobs because of something they tweeted keeps growing:

(And I’m sure that there are many more, but those are the ones that quickly come to mind.)

Though there was outrage, this time it didn’t cost Jeong her job. The paper came to her defense.

It hasn’t stopped the outraged mob demanding her firing, though.

Sarah Jeong tweeted out a statement of ‘apology’ to combat the Twitter mob without seriously addressing her obviously racist tweets.

Her excuse can be summed up as, ‘The angry white people did it first, so my response was fine.‘

And yet, it’s a wee bit ironic that Jeong was attempting to thwart the mob-mentality — she’s taken part in it the past, and even defended the practice.

Tim Hunt, Royal Medal recipient, an honorary professor with the University College London School of Life And Medical Sciences, and Nobel Prize-winner in physiology and medicine, was destroyed for making a bad sexist joke — about his own marriage.

When the conservative journalist, Benny Johnson, was fired from IJR:

When the social media mob went after PR executive Justine Sacco for a really bad tweet about her trip to Africa: 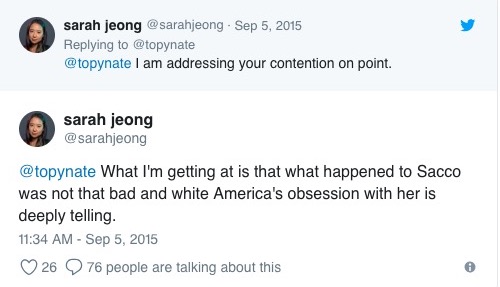 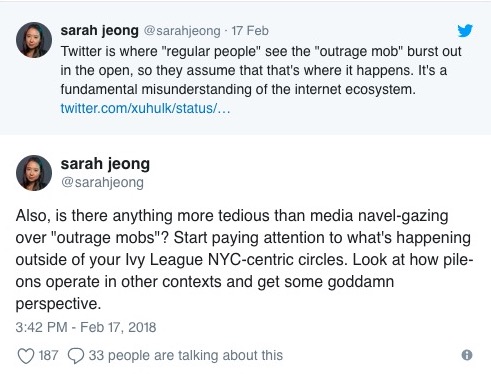 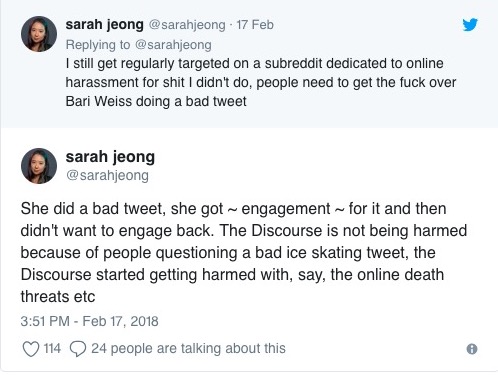 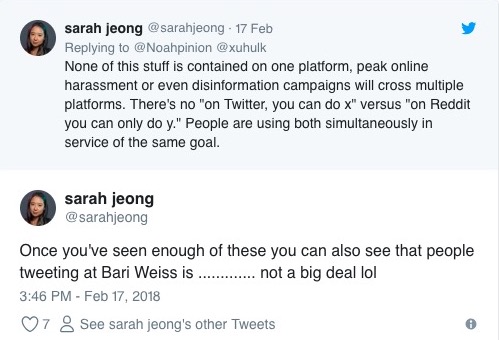 When Mozilla ditched their co-founder and then-CEO Brendan Eich for supporting traditional marriage:

I don’t know if I’d go that far, but she does seem to be in the top-tier.

It’s taken two days for this to come out and what an exposé it has been!

Something tells me, that even if Sarah Jeong cleans out or deletes her social media profiles, there will still be more of this kind of stuff found. The internet is forever.

Even if Jeong didn’t learn to treat others the way you want to be treated, it still shouldn’t cost her her job.

After all, what would it matter?

It appears as though the New York Times had a bit of that now-fashionable anti-white bias already, amirite? 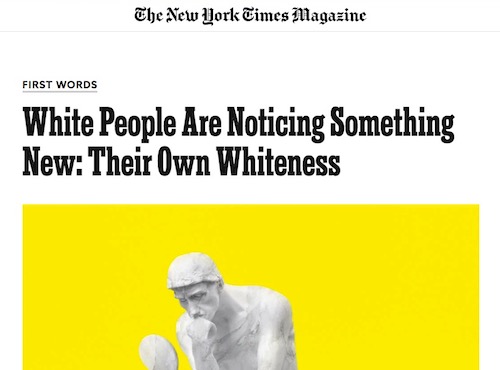 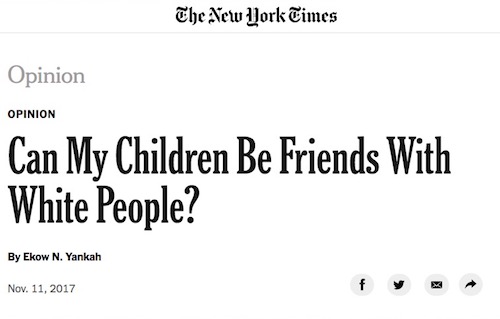 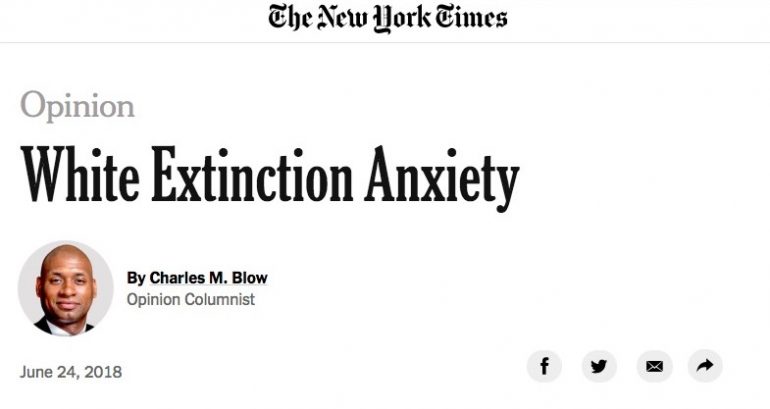