Republicans just picked themselves a political ass-kicker as a Mayor. And he did pretty well in the ring, too.

This guy blows the ‘big dumb jock’ stereotype all to hell.

But you really gotta feel bad for the journalist who had to interview him. The poor guy was eye-level with Kane’s solar plexus. 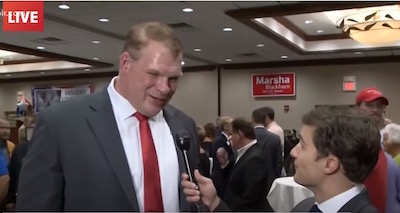 Yes, you could always say he’s a big man.

Now he’s a big man with a big win.

We couldn’t help but throw this clip in the mix:

And he’s committed to beating the Democrats, not just for his own seat, but even in his acceptance speech, he’s already talking about supporting Congressional candidates, the Governor’s race, and the Senate race.

Politics are something of a ‘dumpster fire’ these days, but something tells us he’s not really intimidated by that.

Welcome to the fight, Mr. Mayor.

And from all of us at Clashdaily… ‘stay rowdy’!