Is there ANY way the press wouldn’t have found a way to accuse Trump over his handling of this one?

By remaining his office as Senator long after his ability to fulfill the duties of that role, McCain (deliberately or otherwise) set the ball rolling for one last Anti-Trump political firestorm at the time people might otherwise have been reflecting on McCain’s life and accomplishments.

Because he was still ‘in office’ when he died, protocol expected he would get the rare honor of a State Funeral. And the media waited breathlessly for Trump to do something they could criticize him of.

If Trump had praised him, it would have been called insincere, and they would have endlessly played clips about the times he and McCain disrespected each other.

If he had attended the funeral, he would have been accused of disobeying a dead man’s express wishes.

The Media’s narrative trap was set for Trump, with heads-we-win, tails-you-lose.

The Flag at half-staff got a lot more attention on the news, for example, than any new records that had been recently set either in Wall Street, or in the overall income of average citizens.

[As an aside, if it weren’t just Trump getting ‘the finger’ (His Running Mate wasn’t even invited!) it wouldn’t be so very easy to suspect the motive was spite. But we could be wrong.]

So what did he do?

Trump did what he always does. He used Twitter to bypass the media noise.

My deepest sympathies and respect go out to the family of Senator John McCain. Our hearts and prayers are with you!

There is no reason to believe his tweet offering condolences to the family was anything less than sincere. And it let him speak to the passing while sidestepping the unresolved conflict with McCain.

But was it enough?

Not for the press. Amazon’s Jeff Bezos — who has his own hatred toward Trump — owns the Washington Post. And right on cue, WaPo jumped in with the narrative trap.

It was a ‘break’ from other presidents. Other WH officials offered their praise and condolences. They lined up people tangentially connected to Trump to criticize him, with words like ‘its atrocious’.

They held him up against other world leaders.

“John McCain was a true American hero. He devoted his entire life to his country. His voice will be missed. Our respectful thoughts go to his beloved ones,” Macron posted on Twitter.

The reaction to Trump’s muted response to McCain’s passing was so muted, you’d think he’d been caught taking a grinning selfie in the middle of a great man’s funeral. 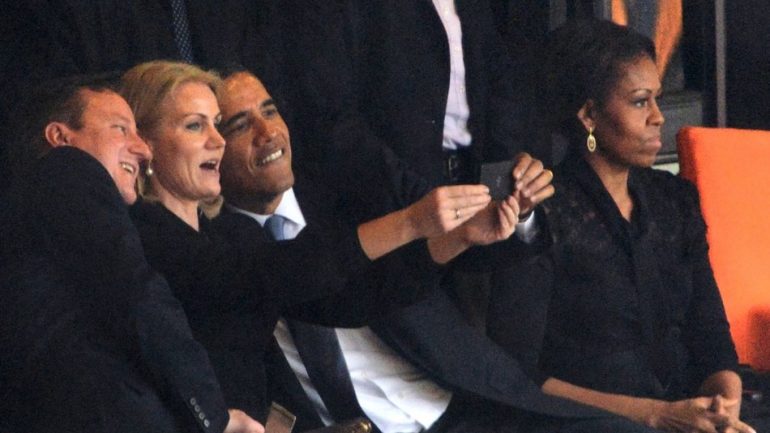 Wait… that was somebody else, at Nelson Mandela’s funeral.

But let’s not get distracted.

We should be very, very cross at Trump for being unpresidential. Because our straight-arrow honest media has told us so.

The Lack of an official WH response to McCain's death...