You might think you know what’s bothering them… but that’s only half the story.

It’s no secret that a certain ‘religion of peace’ founded by the guy his followers all revere as the ‘Prophet of the Sword’ [now there’s a marketing nightmare for you] do not approve of pretty girls prancing around in skimpy clothing.

They don’t seem to object to a great many more serious things, but skimpy clothing is strictly forbidden.

Can you imagine how bent out of shape if the pretty woman wearing a bikini happens to be one of their own?

An Indian actress has been attacked by online trolls after she posted pictures of herself wearing a bikini on holiday.

Sara Khan, 29, a popular television actress, uploaded snaps of herself taken while on holiday in Goa, India, and Dubai, UAE.
Source: DailyMail

Here’s the photo that got everyone so hot and bothered: 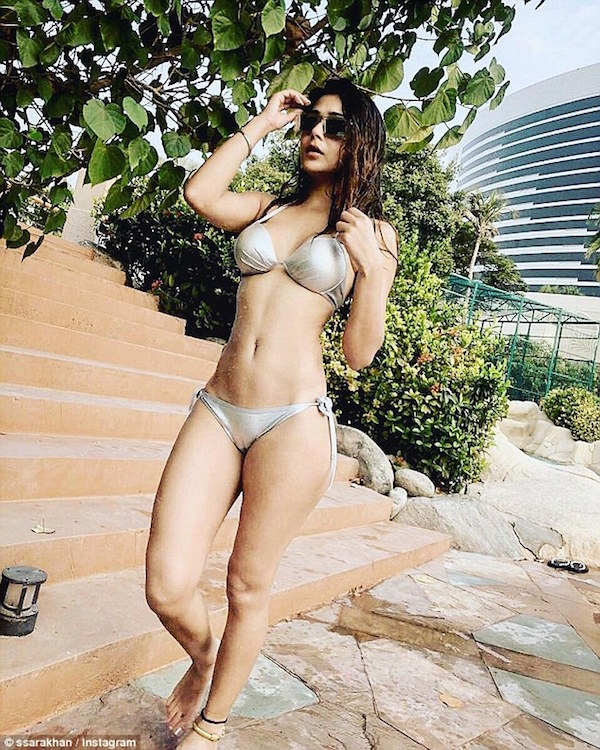 And here come the complaints.

Fellow Muslim Instagram users slammed the fact that she posed snaps of herself in a bikini, and told her she should change religion.

One person wrote: ‘I think you forget you are muslim.. You change your relegious [sic] because in Islamic relegious [sic]… These dress can not allowed.’

Another added: ‘U are Muslim fear Allah. She mite as well sell her body for doin this disgustin pics sharam Kar ur Muslim not white girl [sic].’

One commented: ‘Change your religion do what ever then shame on u Sara you was my inspiration but now I hate you Allah will give you punishment for this shame on you [sic].’
Source: DailyMail

So let me get this straight…

People are demanding that she renounce Islam because she’s wearing some daring clothes even though they still cover her ‘naughty bits’.

That seems a problem, doesn’t it?

After all, isn’t there a pretty strict apostasy law in Islam? You know, something like: those who renounce the religion becoming deserving of death? See: Quran (4:89), with special interest given to the words ‘slay them’.

And depending what part of the world you find yourself in, that penalty might be enforced by Sharia-compliant governments, or perhaps even an angry mob.

Why is that religion of Peace so VERY touchy about bikinis?

The Religion of Peace is so touchy about bikinis because...