Their attitudes toward America and the flag couldn’t possibly be any further apart.

When the news reports on any NFL game these days, the play on the field is eclipsed by the behavior during the anthem. Did they stand and respect the flag? Did they use that precise moment to complain about how much America sucks?

Attitudes toward America sure have changed since the 1860’s.

Compare their thumbsucking to the badassery that earned this American Hero his place in history. 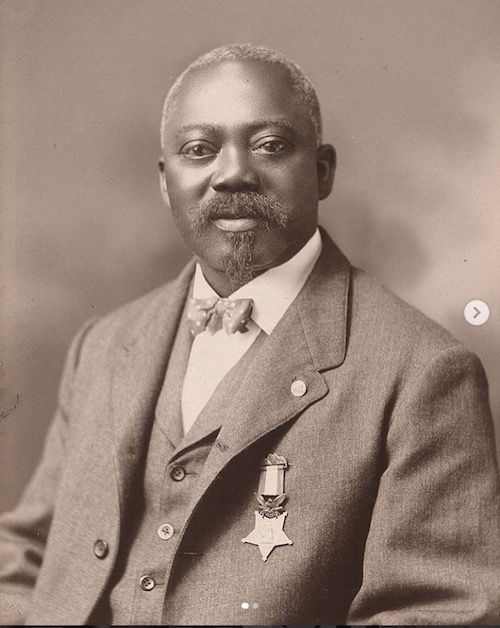 He could have nursed a grudge for America. He was born a slave, after all.

William H. Carney was born as a slave in Norfolk, Virginia, on February 29, 1840.[1] How he made his way to freedom is not certain. According to most accounts, he escaped through the Underground Railroad, and joined his father in Massachusetts. Other members of their family were freed by purchase or by the death of their master — Wiki

But he didn’t. He was a man, who had gained his freedom. He had his pride, and he knew what America TRULY stands for.

SGT Carney retrieved the American flag after the color guard had all been killed and through several wounds never allowed it to touch the ground.

Carney joined the 54th Massachusetts Volunteer Infantry in March 1863 as a Sergeant. He took part in the July 18, 1863, assault on Fort Wagner in Charleston, South Carolina. His actions there ultimately earned him the Medal of Honor. When the color guard was killed, Carney retrieved the American flag and marched forward with it, despite multiple serious wounds. When the Union troops were forced to retreat under fire, he struggled back across the battlefield, eventually returning to his own lines and turning over the colors to another survivor of the 54th, saying, “Boys, I only did my duty; the old flag never touched the ground!” He received an honorable discharge due to disability from his wounds in June 1864
Source: Wiki

Those wounds included getting shot in the face.

And he never let that flag drop.

That’s the kind of ballsy example that inspires Americans so many years later to not just SING the anthem, but to be inspired by it.

Here’s one of my favorite renditions of the anthem as a small way to honor Sgt. Carney’s commitment to Old Glory. It’s ‘ballsy’ … like he was.

Compare that to the spoiled children who dress up to chase a football for a gazillion bucks.

One is ‘worth millions’.

But the other … is priceless.