What happens when a MeToo victim pays off a man claiming he was sexually assaulted by her when he was a teen? Well, things get awkward.

The timing was unbelievable — the settlement with Bennett for $380,000 was made shortly after she said that Harvey Weinstein raped her during the Cannes festival when she was just 21 years old.

Could Bennett have felt the same way?

Bennett’s lawyer notified Argento last November of his intention to sue for $3.5 million for emotional distress, lost wages, assault and battery – a month after she went public with her allegations against Weinstein. The Italian actress agreed to pay him $380,000.

Bennett had played Argento’s son in a 2004 movie, ‘The Heart Is Deceitful Above All Things‘.  In the film, Argenta played the role of a teenage mother that was a prostitute. She also directed and co-wrote the movie. Bennett was only 8 when the movie was released.

Argento continued to be in contact with Bennett for years. They met up again in 2013 at the Ritz-Carleton in California, which is where Bennett claims the sexual battery took place.

The actors stayed in touch on social media, and Bennett says she assaulted him when they met up on May 9, 2013, at the Ritz-Carlton in Marina del Rey, California. The documents say she gave him alcohol and pulled his pants off for oral sex and intercourse. According to the Times, Argento noted the occasion on Instagram: “Happiest day of my life reunion with @jimmymbennett xox.”

In October, the actress told The New Yorker that Weinstein forcibly performed oral sex on her at a hotel in France, where she was attending Cannes Film Festival in 1997. Weinstein has said their relationship was consensual.

This May, Argento gave a fiery speech about sexual assault at the closing ceremony of Cannes. “This festival was his hunting ground,” she told the black-tie crowd. “I want to make a prediction: Harvey Weinstein will never be welcomed here ever again. He will live in disgrace, shunned by a film community that once embraced him and covered up for his crimes.

Can't get enough of these remarks by @AsiaArgento. If people spoke truth to power like this more often (not just about #MeToo) the world would be a much better place.

Also, I love that no one, including Cannes organizers, knew she was going to say this. pic.twitter.com/CJuExD4mJf

Well, that speech didn’t age well, did it?

Check out a few of her tweets that were screen captured by Ryan Saavedra on Twitter: 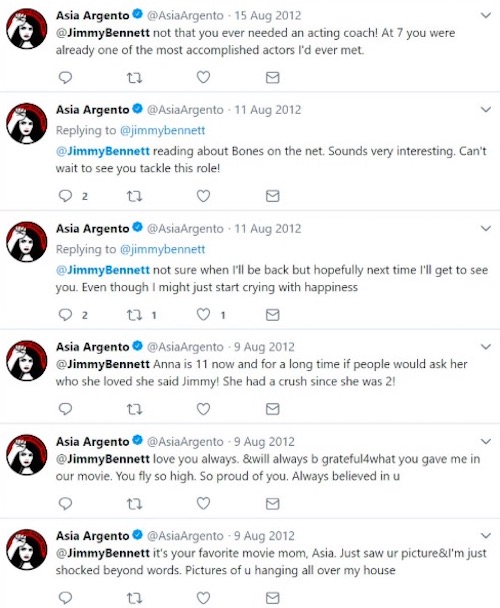 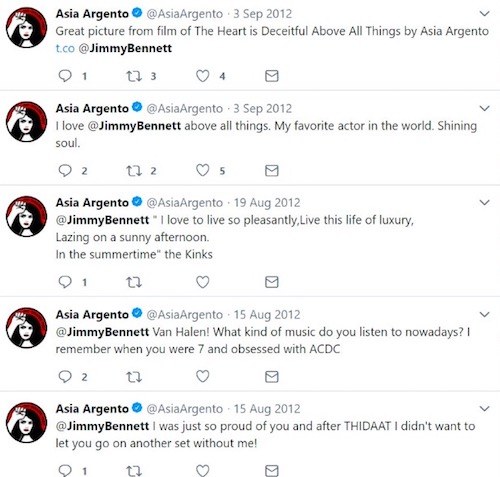 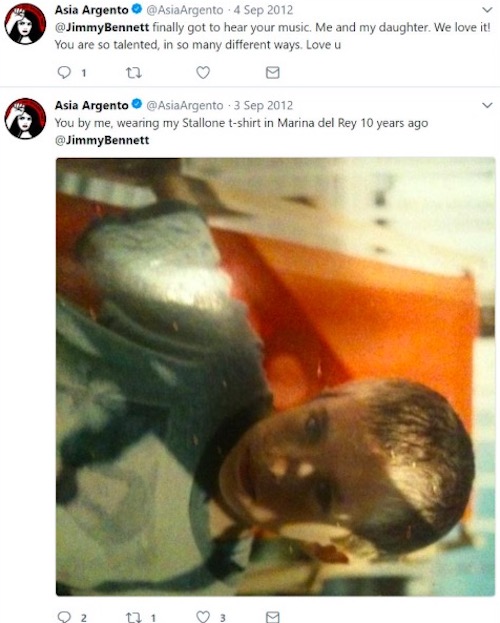 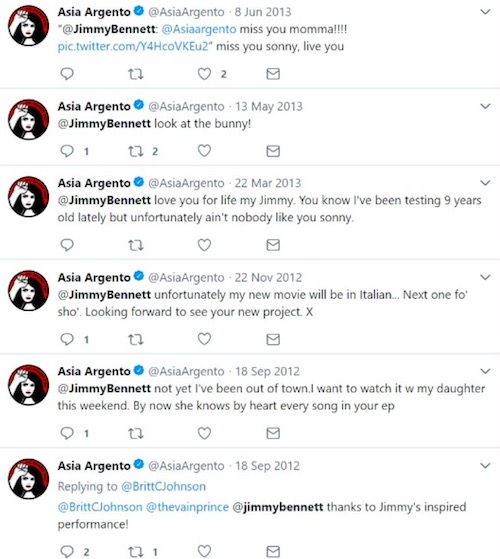 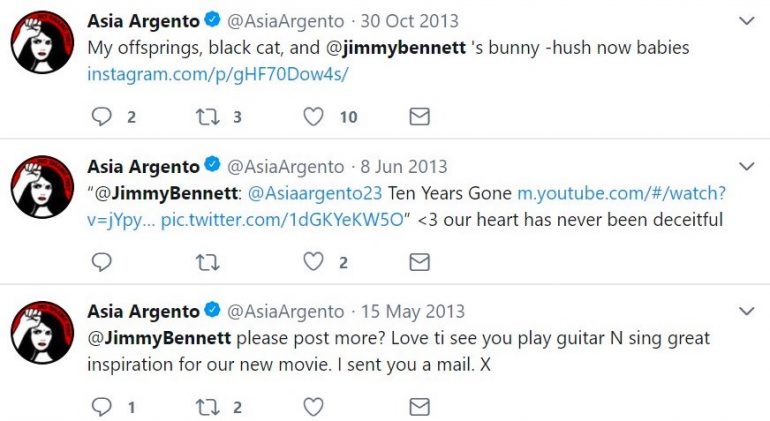 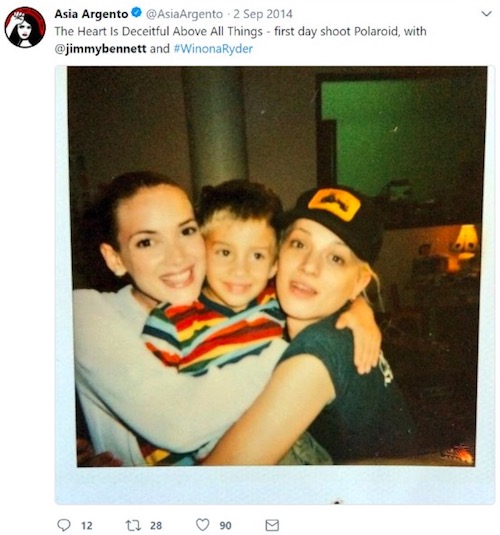 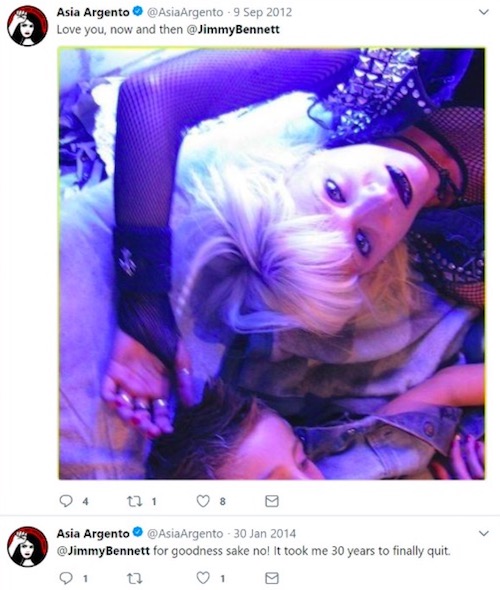 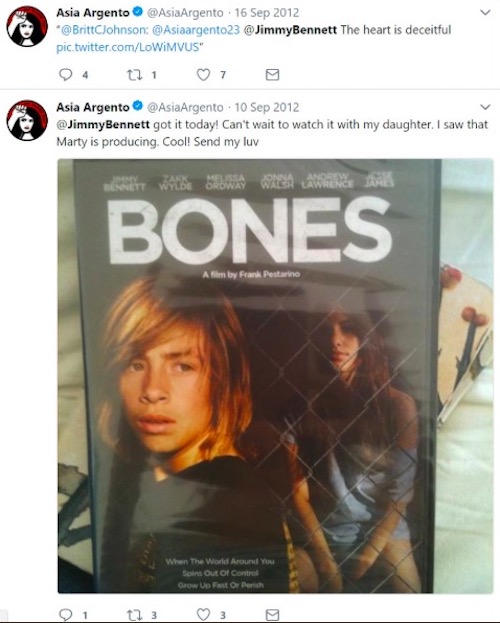 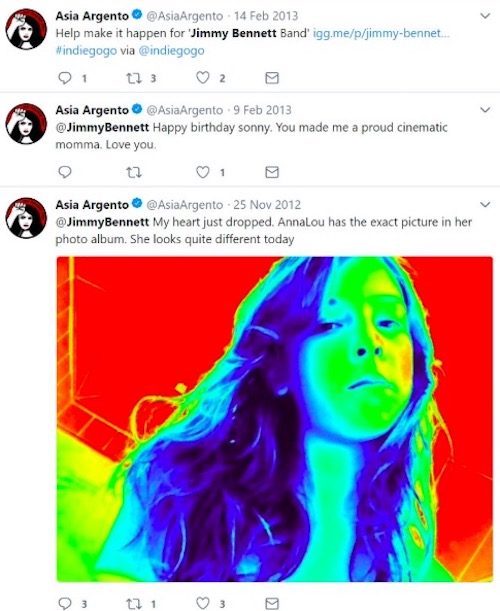 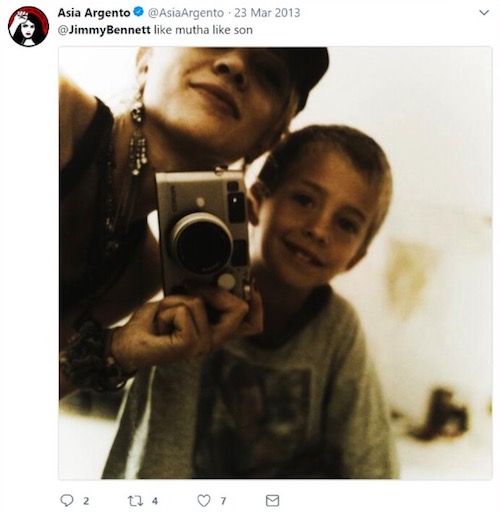 And these particularly creepy ones on the day of the hotel encounter with Bennet, and the day following: 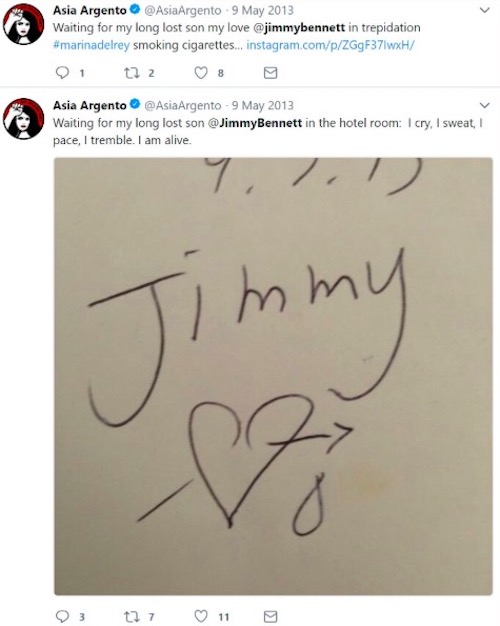 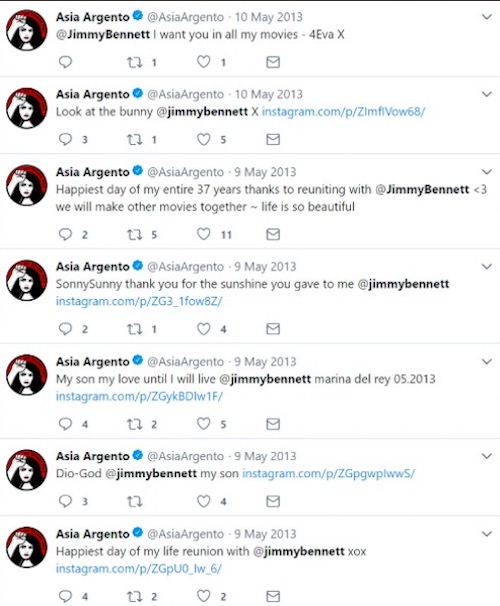 Asia Argento was also the girlfriend of Anthony Bourdain for two years until his sudden death on June 8. Bourdain committed suicide in a Paris hotel room. Argento grew close to another outspoken Weinstein accuser, Rose McGowan, in the aftermath.

The two appeared to have grown close in the short amount of time. In June, following the death of Argento’s boyfriend, Anthony Bourdain, she partnered with McGowan to pen a statement pleading with people not to place blame for the celebrity chef-TV host’s suicide.

“On behalf of me and all who are hurting because of this unfathomable loss, I have asked the strongest woman I know, Rose McGowan, to be my voice, to help me shoulder this burden and write truth,” Argento said in a statement issued to USA TODAY at the time.

McGowan has expressed her shock and that her ‘heart is broken’ to hear that Argento had preyed on a teenager.

I got to know Asia Argento ten months ago. Our commonality is the shared pain of being assaulted by Harvey Weinstein. My heart is broken. I will continue my work on behalf of victims everywhere.

Bourdain had recently boosted her career by allowing her to direct one of the episodes of his show, ‘Parts Unknown’, and getting her a gig as one of the judges on the Italian version of The X Factor. He was also a fierce defender of Argento in the wake of her making the allegations against Weinstein public.

Just three days before Bourdain took his life, Argento was spotted in Rome cozying up to a reporter that was sharing her Cannes speech.

Here she is with reporter Hugo Clément in Rome: 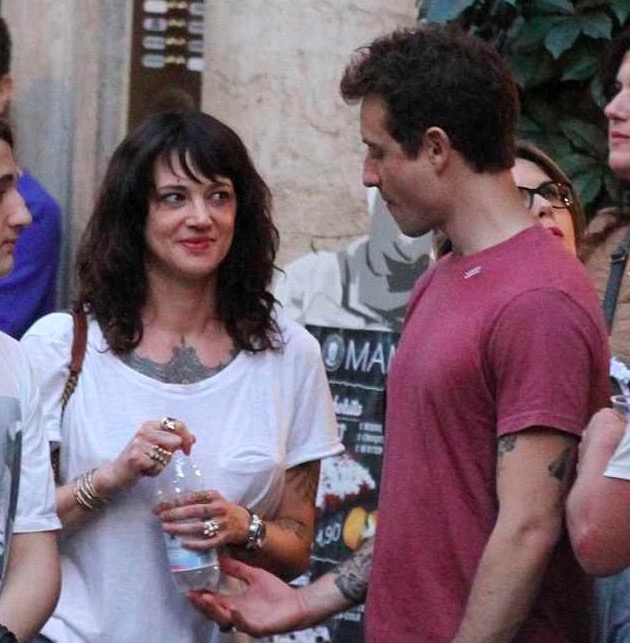 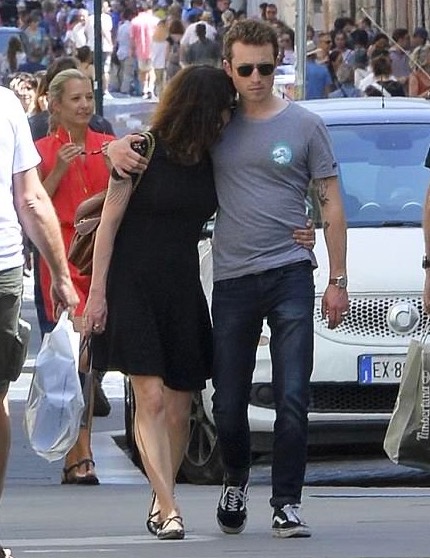 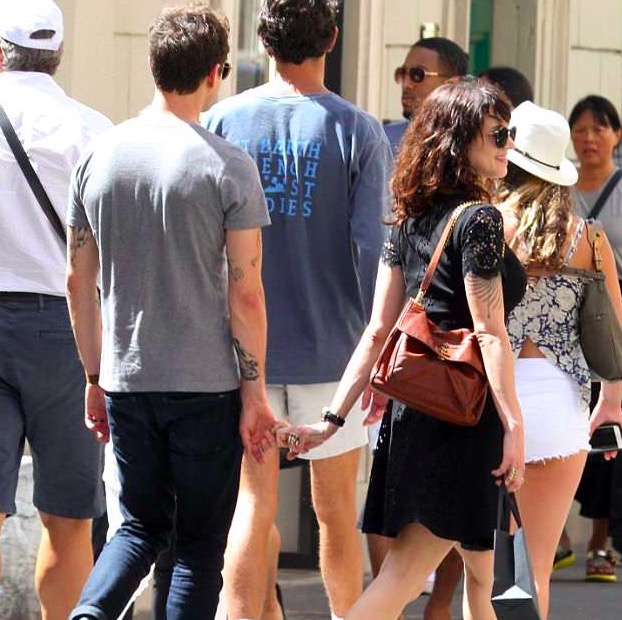 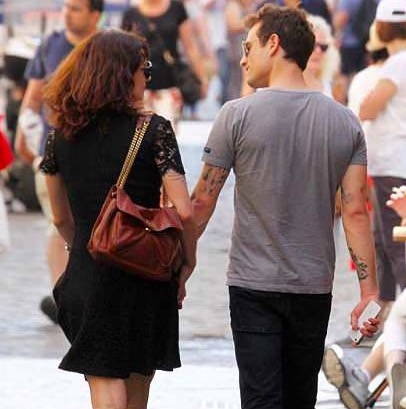 I’m sure that’s nothing.

Just friends hanging around, and celebrating her new successes, right?

None of this looks good.

Asia Argento looks like a hypocrite that was looking for an opportunity to ‘have relations’ with a teen boy that she knew before he hit puberty.

If she cared about victims she wouldn’t have created one.

Her callous behavior being out publicly in Rome snuggling up to another man after Bourdain boosted her career is just gross. Not to mention the ‘let’s-not-assign-blame’ appeal after Bourdain’s suicide just days after the release of photos of her in Rome with another man.

She’s not the kind of example that I’d want my daughter to follow.

Fortunately, there are much better role models out there.