Those ‘experts’ in the Gender Studies department are at it again. They’ve got a new parenting class and it’s a doozy.

This latest silliness is brought to you by the Emily Taylor Center for Women & Gender Equity at the University of Kansas.

Their stated purpose is to ‘approach their work from a social justice lens‘ and they ‘practice intersectional trans-inclusive feminism to challenge the status quo and promote gender equity by raising awareness of critical issues related to gender and sexism‘ and so they translate that awareness into action and provide opportunities in order to ‘empower individuals to advocate for themselves and others‘.

So, to parse that word salad from the halls of macadamia, they want to support feminism questioning the ‘gender binary’ of male and female and stick everyone into little boxes of identity so we all know how we are supposed to think.

For example, if you have a son, he might not be a boy. He could be a girl or maybe non-binary — neither male nor female because male and female are ‘social constructs.’ He (for lack of a better pronoun) could even be genderless alien. If you’re wondering which bathroom said genderless alien would use, that’s not going to be a problem, as the genital removal surgery would render the alien unable to urinate. And yes, that would be the advocacy that would be supported by the Emily Taylor Center.

That’s because they stand firm that ‘gender matters.’

Gender matters. Gender influences almost every part of our lives, including self-identity, access to opportunities, academic and career choices, and the ability to succeed. The ETC is here to advance gender equity and contribute to a welcoming, inclusive climate for people of all gender identities. With this aim in mind, the ETC provides education, involvement opportunities, and tools to challenge stereotypical notions of gender and barriers that inhibit students’ academic success, persistence to graduation, and ability to thrive in the workplace.

But it’s not just about KU students. They’re out to help everyone!

The new initiative is a Feminist parenting group on Facebook that encourages parents to raise children who challenge gender stereotypes.

The purpose of our Feminist Parenting group is to support student-, staff-, and faculty-parents as well as other interested individuals in exploring strategies for raising intersectional feminist children. We seek to empower parents and caregivers to raise children who challenge gender stereotypes and kyriarchy; support equity and social justice; show compassion for themselves and others; respect diversity and difference; and live authentically with vulnerability and empathy. At each session, participants will learn of at least one new skill or resource useful for nurturing intersectional feminist youth.

Now, I’ve been reading up on the sharp turn towards insanity that feminist theory has taken from the early roots of equality, and come across the word ‘kyriarchy’ before, but you may not have. Let me save you the Googling.

Kyriarchy is the new patriarchy, only better. It’s the term that ranks all of the oppression and privilege someone has based on the boxes that their identity checks off.

Here’s a quick blurb from Everyday Feminism on kyriarchy:

First named by Kimberlé Crenshaw in 1989, intersectional feminism is concerned with the social order that privileges and oppresses people based on race, gender, language, class, sexual orientation, (dis)ability, culture, and so on.

Intersectional feminism tells us that oppression comes in many different forms. Someone is not simply oppressed or privileged: we can be simultaneously privileged and oppressed by different aspects of our identities.

Because of this, we need a word to describe the complex social order that keeps these intersecting oppressions in place.

That word is ‘kyriarchy.’

In essence, a thin, disabled, cisgender, queer, white woman is less oppressed than a fat, transgender black woman that identifies as a lesbian. (Sorry to put those pictures in your head.)

These are the ideas that people have and want to embed them in children.

Look, I have no issue with girls playing with trucks or boys with a toy kitchen. In my experience, however, boys and girls play differently with those things. Girls will often have the trucks talk to each other and then tuck them in for a nap, while boys will crash the pots together, throw disgusting mixes of plastic foods together like pizza, peas, and ice cream, pretend to eat it, then pretend to vomit.

That’s because there’s something that is inherent in children that makes boys and girls different. That’s not a bad thing.

One of the posts on the Facebook group is ‘How to tell if a toy is for boys or girls’. 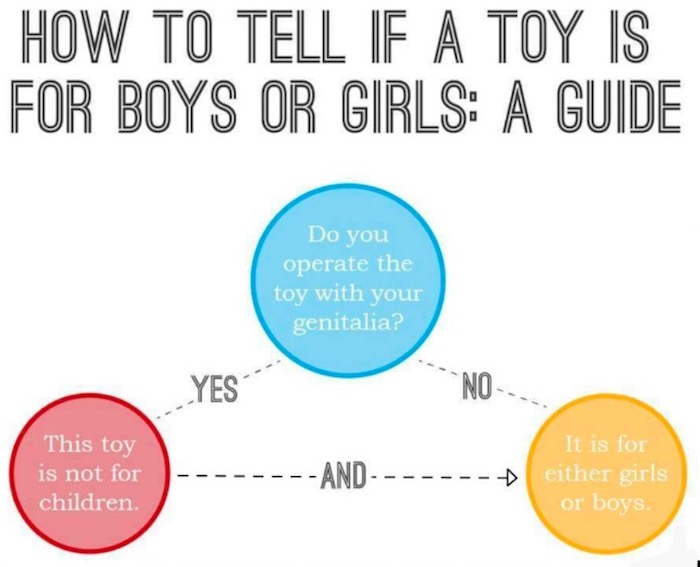 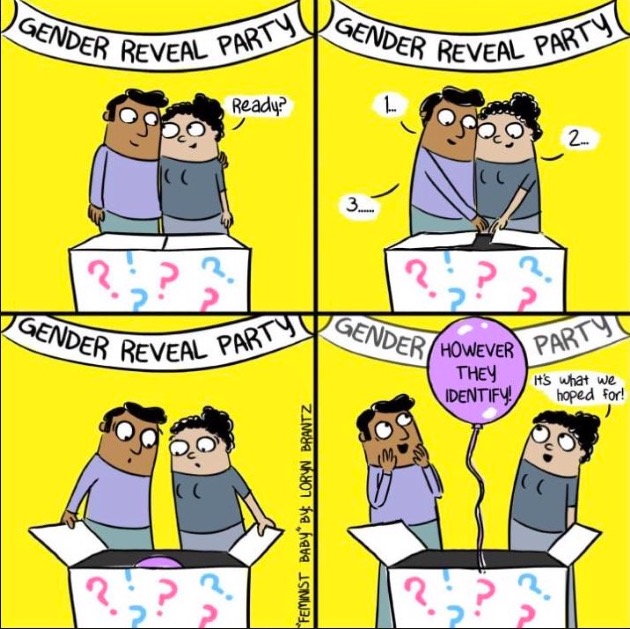 These are the same people that are warring with the early feminists over their refusal to call a man who identifies as a woman a woman. They’ve termed all women that say that a man can never become a woman as ‘trans-exclusionary radical feminists’ or TERFS. And they think that punching a TERF is imperative.

These are the same people that want to raise the next generation of kids to be ‘tolerant’ and ‘inclusive’ by dismantling the ‘gender binary.’ Will they also teach them to beat up people that don’t agree with them, I wonder?

This is just offensive.

That’s why we need to combat these terrible ideas with good ones.