You gotta hand it to them, Democrats love their dystopian books. Too bad they use them as instruction manuals. Their political jargon is straight out of 1984.

You remember, Newspeak? That Orwellian double-talk where language is intentionally shaped to deceive the audience?

It looks like the Democrats were taking notes. Have you heard any of them talking about their big issues lately? Pay close attention to the language they’re using to frame the issues.

Here’s a Liberal-to-American translation for those uninitiated to their PC bullcrap. 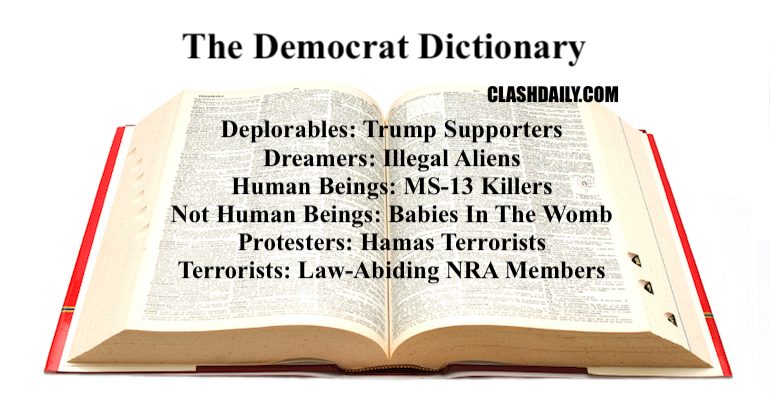 What the law calls ‘Illegal Aliens’ they call DREAMERS. Way to highjack the language of the American dream, guys. And thanks for applying this term, not to the people who respect this nation enough to apply for the right to join us and abide by our laws, but to those who flaunt our laws, game our system, and have no particular interest in either our laws OR our distinct way of life, language and culture.

If you say something insulting about the MS-13 thugs that will use bats and machetes to hack and smash unsuspecting men women and children to the point of being unrecognizable — because guns are ‘too quick’, Nancy Pelosi will chastise you for dismissing that spark of divinity inside of each person… the very same ‘spark of divinity’ she wants to snuff out in a lethal medical procedure that has long since stopped being described as ‘safe, legal and rare’.

Sympathizing with those who get financially compensated by their own government for participating with violence against Israel, they insist that the ‘Palestian Protesters’ have legitimate grievances. But let Americans exercise their freedom of association to show support for another one of their enumerated freedoms in the NRA, for example, and they’re dismissed as ‘terrorists’.

What do we really expect from the political ideology that, finds common cause with the Orwellian-named Antifa, who gleefully use their fascist tactics to ‘bash the fash’. Just like they have found common cause with the KKK in days gone by. White hoods traded for black masks, but they both have an affinity for violence and fire.

You can put it up in your home, or maybe the local Post Office.