Will the Media(D) rally around a Gold Star family now? Or do they only do that when it lets them take cheap shots at Republicans?

The Gold Star widow, Brittany Jacobs, had some harsh words for Nike and their Colin Kaepernick-based campaign about ‘sacrifice’.

If anyone would know a thing or two about sacrifice, it’s a family who has received the gift nobody ever wants to receive: one neatly folded flag.

His final resting place is at Arlington National Cemetary.

That sheds a whole other light on the ‘sacrifice’ message of Kaepernick, doesn’t it? We’re supposed to think you ‘sacrificed everything’, didja Colin?

Especially when you remember that Colin turned down a job offer from the Broncos.

Here’s the interview with Brittany Jacobs:

Brittany Jacobs: “There’s so many great men and women in this country that have sacrificed everything and Colin Kaepernick, he’s not one of them.” pic.twitter.com/JrbAssTNeO

Jacobs, who, along with her son, has been photographed with President Trump, believes that Nike could have made a more appropriate selection. “There’s so many great men and women in this country,” she said in the interview, “And Kaepernick is not one of them.”

Brittany Jacobs invited Nike executives and Colin Kaepernick to meet her at Arlington cemetery to consider and discuss their position while “looking into the eyes” of her and her son. In that setting, she stated, they could also look around and see the thousands of service men and women who had sacrificed their lives for the protection of the country.

Jacobs said that she does believe in and respect the right for people to stand up for and speak about those things in which they believe. However, she asserted that had her Marine husband been alive, he would have been disappointed in Kaepernick’s decision.
Source: TruthExam 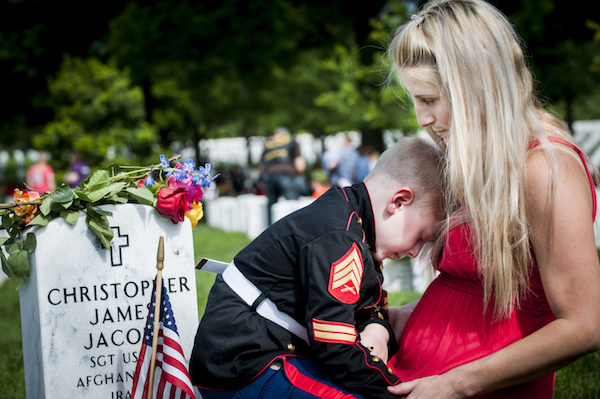 Can either Nike or the Millionaire former athlete turned activist be quite so cavalier in their use of the word ‘sacrifice’ when you’ve humanized the people Colin’s explicit contempt of the flag hurts most?

Could either have the guts to stand in front of the tombstone and the family of the man whose name is inscribed on it carry on without him day by day?

We’re guessing the answer to that question is a hard ‘no’.