That’s one more promise kept, in case anyone was keeping track.

President Trump vowed to protect persecuted Christians around the world.

The migrant crisis that has thousands flooding into Europe has a startlingly small number of Christians.

In the first 3 months of 2018, despite 10 percent of the population of Syria identifying as Christian, England brought in zero Christian refugees.

This is partly the shameful treatment of persecuted Christians by the United Nations, and the increased threat of persecution they face as refugees.

The Trump Administration has increased the number of Christian refugees to 70 percent.

Here is a graph by Axios: 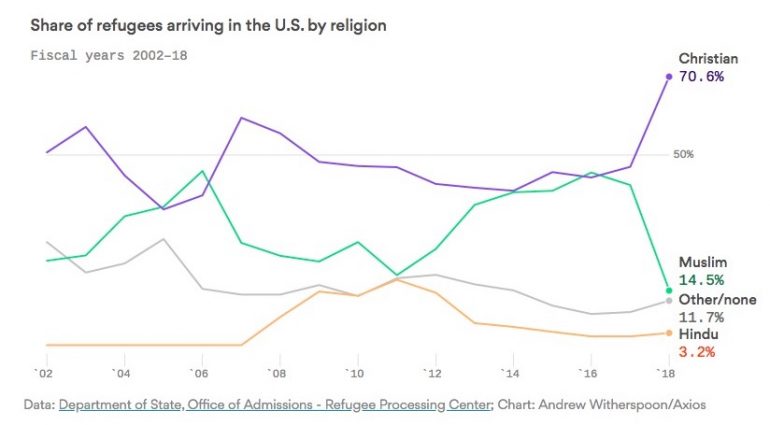 Refugee resettlement to the U.S. from countries with known Islamic terrorist problems has greatly dropped, according to Reuters. For example, about 250 Somali refugees have been resettled. At this same time during 2016, under Obama, about 8,300 Somali refugees had been allowed to resettle across the country. This represents a 97 percent decrease in refugee resettlement from Somalia.

Officials say refugee settlement in the United States is very expensive. “We can house, feed, and provide medical care for hundreds of thousands more refugees closer to their homes and do so more rapidly than we could possibly do here in the United States,” Secretary of State Mike Pompeo said Sept. 17. “The ultimate goal is the best possible care and safety of these people in need, and our approach is designed to achieve this noble objective.”

You’d think that those on the left that are criticizing President Trump for not bringing more refugees to the United States could at least be consistent. Are they mad about Trump allegedly saying, ‘sh!thole countries’ or not? Do they think America is the greatest country in the world or is it the problem that we need to keep apologizing for?

It’s supremely arrogant to say that there are no such things as sh!thole countries, and yet demand that the only solution is to rescue people and move them halfway across the globe to the United States where the language and culture are vastly different.

I think America is a wonderful country and absolutely love the United States. I also still want the government to be able to help as many people possible, faster, and with less cost. What’s wrong with helping people closer to their own homeland and with similar customs and language?

That’s why, in my books at least, the Trump administration is on the right track with this one.