If you were booking a venue for an Obama speech, how many seats do you think you would need in a friendly state like California?

He is, after all, still the darling of the Left. He and his wife both got tens of millions for their book deals. They’re jet-setting all over the world, and doing the speaking circuit for amounts so obscene nobody is allowed to publicize them.

How many seats would such a top-tier celebrity politician as Obama need in this day of the Resistance? Remember, booking too small an auditorium and turning people away is only ONE of the mistakes you can make.

Giving a speech to a room with more seats than people is an even bigger PR blunder.

And that’s exactly the blunder Obama just made.

Could he already be a ‘has-been’?

That was quick. At least the Clintons were able to stay relevant for awhile.

Obama's speech was IN CALIFORNIA.

Maybe people are just bored with Obama stuttering his way through speeches that, when you break it down, are all about him anyway?

Obama packed a house all the way up to TEN percent capacity?

We haven’t seen anyone speak to such an empty room since — well — since Obama gave that final address to the military: 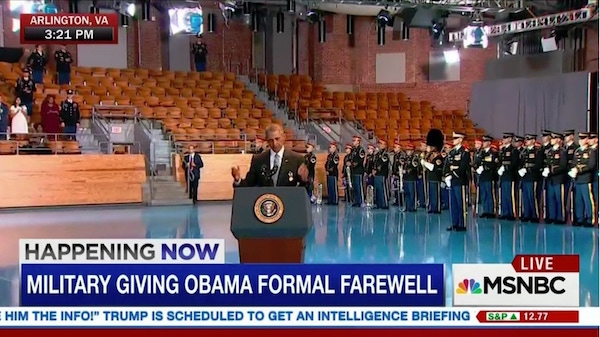 Ouch. That was bad.

He could have thanked everyone there by name without going over his allotted time.

Do you think Obama’s feeling a little unappreciated? Especially when he sees those packed MAGA rallies night after night?

Poor Obama, that can’t be good for the ego. Especially an ego as big as his.