The attorney for Stormy Daniels seems to be really upset that his 15 minutes of fame are up. He’s out there working the angles to get back on network news stations. Check out this fresh load of B.S.

The sudden — and unverifiable — accusations against Supreme Court nominee, Brett Kavanaugh, have knocked Stormy (and, by extension Avenatti,) right out of the headlines.

And he had a real taste for stardom. He was a staple on MSNBC and CNN, he even made it onto Tucker Carlson’s show on Fox News.

Ah, it was the good life.

He even said that he was so fixated with the truth that he wasn’t looking to be on television. 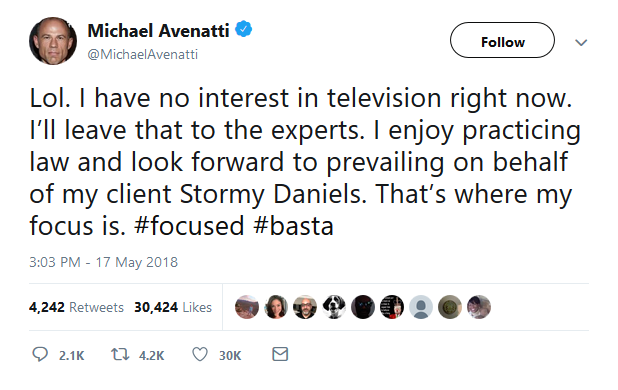 He was seen as the #Resistance hero right up until there was a new hero in town, and she was already lawyered up. 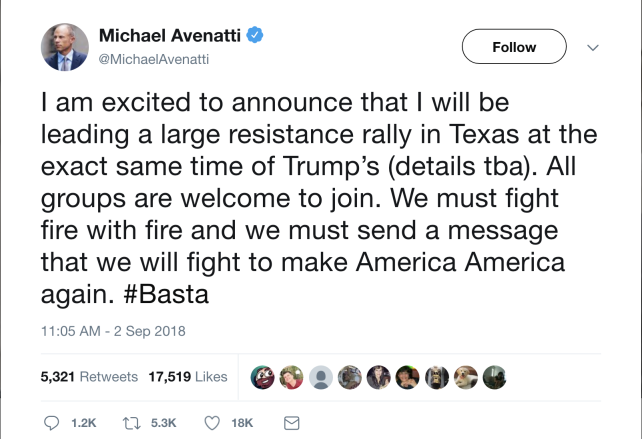 What’s a guy to do to get his mug back on CNN?

Well, there’s really only one thing he could do… release that alleged video of Trump and Stormy doing the nasty. 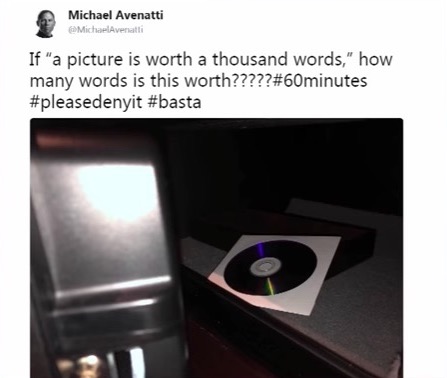 But that was back in March and we’ve heard zero about it since — it may be safe to assume it was all bluster.

So, he’s got to do the next best thing — find a new accuser that he can represent.

That’s his story and he’s sticking to it.

On MSNBC Monday night, Avenatti told host Rachel Maddow that his mystery client could conceivably bring criminal charges and that he would reveal her identity within the next two days.

Avenatti says the woman will ‘literally risk her life’ by going public.

The lawyer said the woman is ‘100 per cent credible’ and is willing to take a polygraph if Kavanaugh does as well.

Watch his statement on Maddow’s show:

Avenatti describes his client as a "witness and victim" and says she will make her allegations public within the next 48 hours. pic.twitter.com/RLscXvFE9y

Avenatti said that the woman, who once worked for the U.S. Mint and the State Department, has information about Kavanaugh and his childhood friend, Mark Judge.

‘It will relate to how they behaved at countless house parties,’ Avenatti told USA Today earlier in the day.

He says there will be ‘many, many’ corroborating witnesses to confirm the woman’s account.

Ah, yes. The ‘many, many’ corroborating witnesses that were not found 6 times by the FBI when they did background checks on Brett Kavanaugh.

But, as he makes his rounds in the news circuit, he told Chris Cuomo that he’s actually got more than one client, and that he doesn’t believe that the statute of limitations will apply. That means he’s going to go after Kavanaugh for actual rape à la Bill Cosby.

This is what he’s trying to get you to believe.

Not only that, Avenatti says that he doesn’t believe Brett Kavanaugh’s claim of virginity until ‘many years’ after high school. Coming out as a virgin for years must prove that he’s actually a sexual predator

AVENATTI: I just think it’s absolutely unbelievable. And I think the American people are smarter than this. You cannot reconcile the individual on Fox News with the individual that was joined at the hip with Mark Judge throughout the years at issue. You just can’t. I don’t believe that America is going to believe what Brett Kavanaugh just stated on Fox News.

CUOMO: So, what exactly is he saying? Is he saying that he did not have sexual intercourse?

AVENATTI: Are we going to get into a definition of sexual intercourse? Does that mean he performed oral sex or had oral sex performed on him? Does that mean any host of any other sexual activities occurred? Or does he want America to believe that the only thing that he did until well into his college years was effectively kiss or French kiss a woman? Is that what he wants America to believe? I don’t believe it.

I actually agree with Avenatti that ‘you can’t reconcile those two’ — yeah, because the Avenatti accusation is completely unbelievable.

Watch him talk to one of the candidates for the Dumbest Man On Television, CNN’s Chris Cuomo about his client, the Victim-Witness™:

Avenatti has said that he doesn’t traffic in ‘rumors and nonsense’ and he’s completely credible. We’re supposed to believe that because he said so. 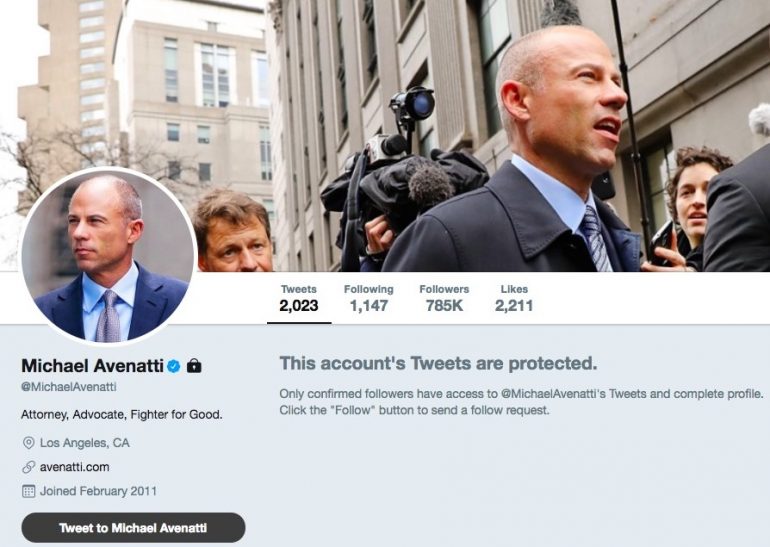 I guess it was #Basta time. https://t.co/DSvBRwow10

He’s blaming this on ‘bots’ and ‘Trump trolls’. 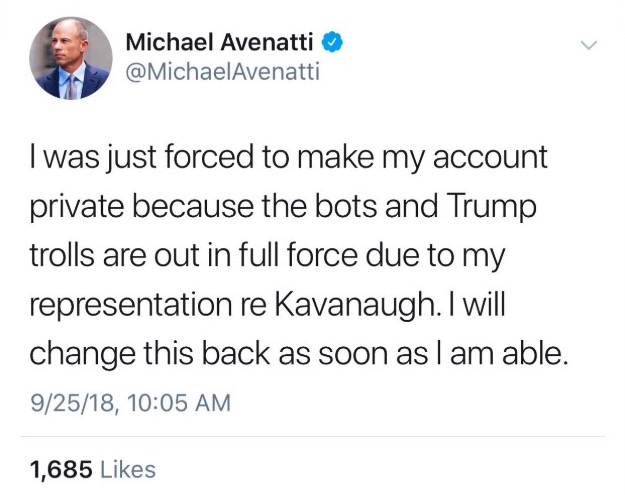 Which is too bad, because he had some juicy stuff up there.

Here are some screenshots: 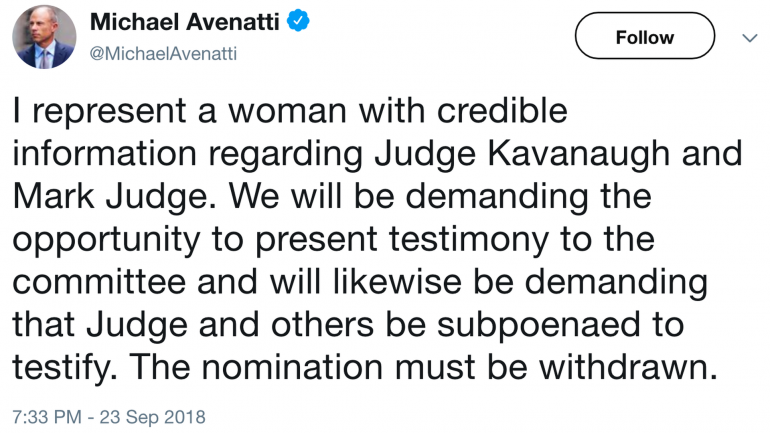 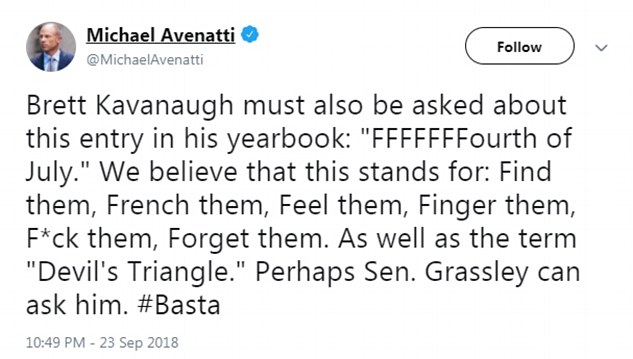 Perhaps it was because he called a Supreme Court nominee a ‘liar’: 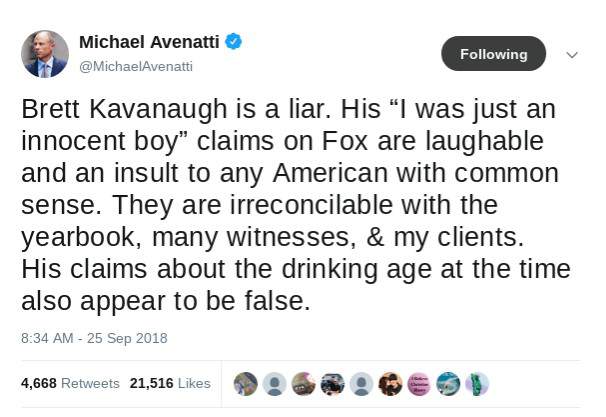 Or maybe it was because of stuff like this:

Rumors are powerful. They don’t even have to be verified or serious to kick off. Let’s start a rumor about Michael avenatti. I’ll start:

Avenatti and stormy Daniels are dating. he’s also her pimp.

When their 15 minutes of fame are over, Stormy and Avenatti plan to rekindle the flame by doing a sex video together.

Be very careful. I don’t want you to lose your job. @MichaelAvenatti is a big baby who tries to get anyone who makes fun of him fired. He just did it to the Texas schoolmaster at Oak Ridge School. He gets joy out of ruining people’s lives.

No no no, he’s using Stormy Daniels to get 15 minutes of fame so he can sign a multi-million dollar book deal.

Shit, also not a rumor. We suck at this game @PardesSeleh ??‍♀️

He arranged all of Michael Vick’s dog fights and held the money during the fights.

Michael Avanetti wears a bra and panties underneath his suit. I honestly believe this tho.

It seems to me that he is just a peddler of salacious allegations with little to no evidence to back them.