Looks like the radicals took the advice of ‘aunty Maxine’. They’re even making specific and credible threats toward elected officials.

THIS — not her race — is why we call her ‘Mad Maxine’. The corruption and dumb rhetoric are bad enough, but some of those rabid followers are certifiable and legitimately dangerous the maintaining of a civil society… or was that the goal all along with #Resist? She specifically encouraged behavior like this in her ‘call to action’. After all, she called the LA riots:

“What I tried to do was take it out of the discussion of ‘these are just no good, crazy rioting people’ and to talk about what I call an insurrection, which made a lot of white people mad,” she recalled.

In one famous incident of “insurrection” broadcast across the county, four men dragged truck driver Reginald Denny out of his cab and beat him within an inch of his life.
Source: Free Beacon

Did you catch that? Resistance and violence can mean the same thing. When she’s not screaming ‘impeach 45’ she’s bragging about being in the Resistance.

What have the radical goons on the ideological front lines been up to? They’ve been tweeting: 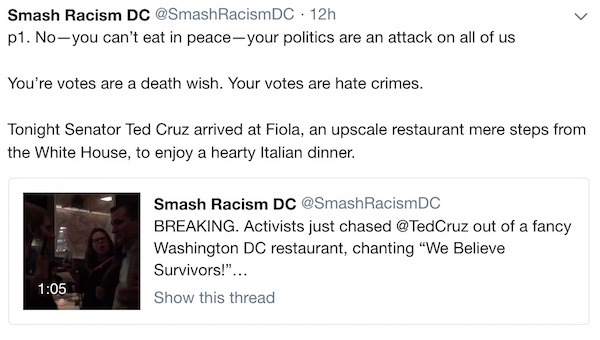 From that same thread (these are screen captures because if Twitter has any standards at all, these will eventually get pulled down. The one where they doxxed a private conservative citizen and said they ‘love white genocide’ was omitted.)

That last one seems to be an explicit threat against the President, and seeing as they felt emboldened to pull this stunt against a sitting Senator, this isn’t the same thing as some random cranks spouting off with the usual ‘oh yeah? If I could only have five minutes alone with [public figure ‘x’] the things I would do to him…’

Two videos were posted by “Smash Racism DC” and they show a large group of protesters chanting “We believe survivors” in reference to sexual assault allegations against Supreme Court nominee Brett Kavanaugh at Sen. Cruz and his wife, Heidi Cruz.

One video shows a protester confronting Sen. Cruz and his wife as they entered the restaurant. Sen. Cruz tells the woman “God bless you” before attempting to take a seat at a table.
Source: FederalistPapers

Remind me again, which party was saying they would take the political ‘high road’? Keep that sanctimonious statement by Michelle Obama in mind as you see what the latest crop of left-wing protesters does in the spirit of ‘love trumping hate’:

And then came something just as incredible… the claim that right-wing news organizations need to pay for the use of their ‘fair use’ video.

Yo, Numbnuts over at Smash Racism DC, Twitter and Facebook keep saying they’re not publishers… so your videos are not under copyright.

And if you did want to monetize them and/or make it difficult for people to grab them off of Twitter, there are ways to do that.

Smash Racism D.C. posted a long and threatening Twitter thread. The exerpts above are from it, if you want to go looking for it, just look for the right time stamp on that twitter account, supposing the account hasn’t been shut down for violations by then. Then again, leftist pro-violent groups seem to get a lot of latitude. (FYI — the thread was posted on September 24, 2018).

It’s stupidity like this tht is making even the never-Trumpers think twice about sitting this one out.

Keep showing the world who you REALLY are, guys. We don’t want you silenced.

Quite the opposite. We want you to become the face of the Resistance. We want people to think of YOU when they hear ‘Impeach 45’.

And then, we want them to vote. Because there’s a ‘big idea’ you folks still haven’t figured out yet:

That bitter, hateful, violent and myopic view of America is still a minority voice.

Senator Orrin Hatch’s office gets an A+ rating for their take on this situation:

Chasing a Cuban-American Senator you disagree with out of a restaurant while chanting “fascists not welcome” under the banner of “smash racism” might have just taken us over our irony quota for 2018. https://t.co/datsJcZxMj