Want to see a magic trick? With just one sentence, the Dalai Lama will change from ‘beloved and revered holy man’ to ‘bat-crap crazy racist radical’.

It’s like that time Trump suddenly became a ‘racist’ when he became political and put an ‘R’ after his name… only this one is even sillier.

It really is a tough call for the Left. How should they handle this one now that their beloved Dalia Lama has ‘gone rogue’ on them?

Just days after Bono called Sweden ‘literally Hitler’, the Dalai Lama made a statement sympathetic to their supposedly ‘nativist’ (or in the words of Bono, ‘Aryan’) sentiments.

Will Bono be calling the Dalai Lama ‘the devil’ now, too? THAT would make for an interesting plot twist.

Leftists love propping up the Dalai Lama as a way to pretend they actually care about religious leaders without having to speak with any prominent Christian ones.

But now he’s gone and barbecued one of the Left’s favorite sacred cows… the ‘Welcome Refugees’ movement.

Will he still be ‘beloved’ or will he be a pariah now? 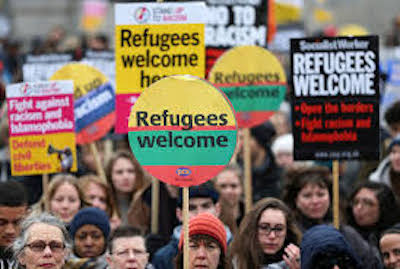 The Dalai Lama has told a press conference in Sweden that “Europe belongs to the Europeans”, asserting that refugees should be repatriated so they can rebuild their homelands.
Speaking in the multicultural city of Malmö, where nearly half of residents are of foreign background, with Iraqis making up the largest single group, the leader of Tibetan Buddhism said Sweden is seen as “a peaceful, generally prosperous country” with a relatively small gap between rich and poor.
[…]
Noting that a large number of immigrants have settled in Europe from the Middle East and elsewhere, the Nobel Peace Prize-winning spiritual leader said it was good for nations to help “a refugee really facing danger against their life”.

“Receive them, help them, educate them… but ultimately they should develop their own country,” said the 83-year-old Tibetan.

“I think Europe belongs to the Europeans,” he added, stressing that countries like Germany and Sweden should make clear that refugees must “return to their homelands and rebuild them”.
Source: Breitbart

It’s almost certain that they are going to write this off as ‘hateful’.

But look closely at what he said. What, really, is so terribly offensive about it?

Receive them? No problem.

Educate them? No problem.

They should develop their own country… That’s going to be a Problem.

But why? Would not ‘progressives’ not be the first to affirm that their country of origin is a wonderful culture and worthy of preservation? That writing it off as an S-hole country would be uncharitable? That it is worthy of rebuilding, and that those who hail from there have more of a right to rebuild it than some ‘imperialistic’ Western Nation?

Who better to rebuild it than the very people who know and live that culture?

And furthermore, would not all the same arguments that praise the worth and value of a country on some continent hundreds or thousands of miles away also be true of those in the country that opened its doors to receive them?

After all, it invested from its own resources to feed, clothe and educate them so that they could return to their homeland properly equipped for the task of rebuilding.

What about the unspoken question so carefully avoided in conversations about the REAL refugees, the very young, the very old, the infirm, the women. Why do photos of migrants always seem to consist of crowds of young men in the flower of youth?

Why NOT take that strength and vitality back home to rebuild their ancestral homes; especially in areas where the fighting has subsided?

Unless there is some OTHER agenda that Left would rather not discuss openly. And if so, what is it?

What the Dalai Lama said about Refugees returning home...