With Strzok and Page, every time we think we’ve hit rock-bottom, it turns out things were even worse than we thought.

*update*
And just like that, it got worse again… as the update further down will explain.
*end update*

For some high-powered insiders who tried to deep-six the President, they may have instead exposed a whole network of political corruption, instead.

Ironically, people who were connected to the Mueller investigation into Trump are the first examples of anything that might show conclusive evidence of an actual conspiracy.

Except that this conspiracy (if indeed, that’s what this was) was aligned AGAINST Trump, and for his Democratic rivals.

They break it down on this interview:

The shorter version is here:

Rep Meadows has questions for Rod Rosenstein about his ‘grave concerns’ about an ‘apparent culture of media leaking among high-ranking officials at the FBI and DOJ related to ongoing investigations.’

It centers on yet ANOTHER text exchange between the two unfaithful spouses and agents that we hadn’t seen before. 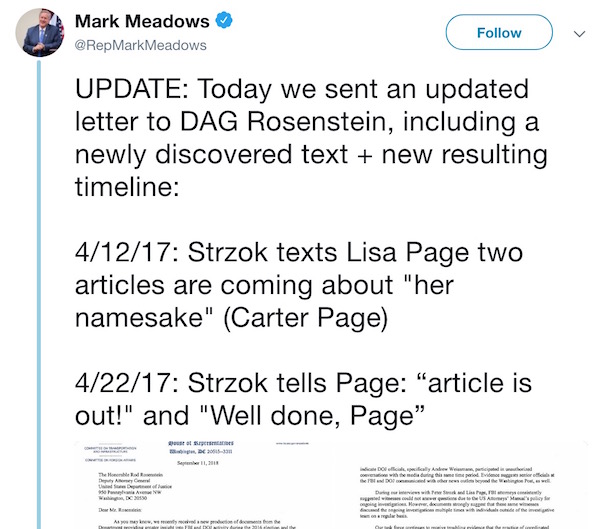 So, the new timeline:

So, unless there was some legitimate reason to release this information, this looks like an attempt to deliberately create a narrative that undermines the President’s authenticity.

And notice the dates:

*update*
As incriminating as the dates in the original story were, this update makes the setup look that much worse.

This leak came out BEFORE the election. By the same government employees who later were part of the team tasked with “looking for Russian Collusion”.

Former FBI Special Agent Peter Strzok and his paramour former FBI attorney Lisa Page exchanged text messages several months before the 2016 election that suggest the pair were writing an op-ed together and that the FBI seemingly “authorized” a Washington Post story on potential Russian interference during the November elections.

Strzok replies, “Yes, ish. He said too much data would be good to identify the key pieces of data and frame it in an argument, but not to spend ‘too much time on the opening or closing.’ I told him we were too much of perfectionists to not do all of it.”
Source: SaraACarter

We’re seeing a pattern of leaking here, aren’t we? Leaking that has an obvious political objective.

And don’t forget: improper contact with media was the very thing that disqualified Steele as an FBI source.

Could it be that Government Insiders who were investigating whether a foreign power was improperly influencing an American election were doing exactly the same thing themselves? On the government dime? Isn’t that exactly what we mean by ‘deep state’ and ‘weaponized government’?

Back to the conversation about the dates, already in progress:

April 22, 2017. Why are these dates significant? Because Mr. “Insurance Policy” Strzok was spinning the media on the Russian Collusion story less than one month before the Mueller investigation began (Mueller was appointed as independent counsel on May 17th) … an investigation that Strzok himself became part of.

What are the legal implications of participants in the investigation leaking information so as to create an environment where the public cries out for an Independent Counsel  that is manifestly more interested in harming Trump and those in his circle than he is in discovering what influence — if any — Russia exerted in our political system (with respect to either party).

Will the public opinion shift back from ‘Impeach 45’ to Drain the Swamp?

What would the ‘Fruit of the Poisonous Tree’ implications be of an active conspiracy against Trump, if that’s what this turns out to be evidence of?

What happens to the credibility of the Media who’ve been beating the war drums and actively cheering Mueller since day one?

There are also reasons to believe this problem with leaking goes even higher up. But just how high …?

The letter [that Meadows sent to Rosenstein] notes the troubling nature of the text messages. Former Deputy Director Andrew McCabe was fired by Attorney General Jeff Sessions after a scathing report from the DOJ Inspector General Michael Horowitz’s investigation charging McCabe with lying to investigators and leaking to the press. Last week, the DOJ announced that McCabe is currently under a grand jury investigation.
Source: Sara A Carter

And leaks are hardly a rarity in the team assembled against the incumbent adminstration:

In March this news outlet also revealed that Weissmann, a top prosecutor on the Mueller team, had met with reporters from the Associated Press in April 2017 just one day before their explosive story on Paul Manafort’s dealings with Ukraine officials.

According to sources familiar with the meeting, the reporters had promised to share documents and other information gleaned from their own investigation with the Justice Department.
Source: Sara A Carter

We look forward to seeing the rest of the layers in this story get peeled back.

Well, so long as the Republicans continue to hold the House and Senate, and aren’t blocked from asking questions about how our own government was weaponized against us.

As Obama said: ‘elections have consequences’.

What's the future of the Spygate scandal?