In crisis after crisis here in America we’ve seen both the very best and the very worst of what humanity has to offer.

The ‘soul of the nation’ has been tested again and again to show us what we’re really made of: some of it is amazing; some of it, is found wanting.

We have seen the rise of the Cajun Navy, heard stories of strangers helping strangers, ‘just because’, and people going WAY out of their way to do it. We see communities gather around someone in need.

But sadly, that isn’t the only thing we’ve seen time and again.

We’ve seen corruption and incompetence in Puerto Rico where the same people who should have been delivering food and water were either taking supplies for themselves or leaving it to spoil. But on a much more personal scale, we’ve seen — from the wreckage of Katrina to Harvey to New York to Florence, a sad pattern of looting. People exploiting an opportunity for personal gain in a moment where first responders are tending to more serious issues, like saving lives.

But last weekend, Canada’s capital was hit by three tornados (ok, officially, it was 2 tornados and a ‘downburst’), had a quarter million or more people without power, with entire sections of the city completely without power, and there was not a single reported instance of looting.

I repeat: Not ONE SINGLE report of looting. That is in an a city of almost one million people.

There were reports of neighbors whose entire neighborhood was reduced to matchsticks scrambling to rescue a single frightened beagle trapped within one shattered home on their street. (He got out.)

We’re not being needlessly dramatic with the ‘reduced to matchsticks’ reference. See for yourself.

It’s the kind of scene that might fit right in with Hurricane Andrew photos.

And the Ottawa area had several such sites.

It wasn’t just the outskirts of town that got hit.

This footage is taken in the city itself:

We sincerely wish we could provide restoration times for all of you. As soon as we know, we will post. Ottawa's electricity grid has not sustained such extensive damage since the Ice Storm of 1998. Our crews will continue to work around the clock. Scene at Greenbank today: pic.twitter.com/84q58zTnwz

But life carried on.

There was a wedding in scheduled, but power was out — so the couple went ahead and got married by candlelight.

There were shelters of free food set up, where farmers donated, for example, ‘a hundred dozen ears of corn’. Of grocery stores giving away meat. Or food truck operators gave away their entire remaining stock and offered to cook any potatoes that residents brought by.

Social media lit up, not only with people ‘checking in’ that they were safe, but in the initial hours after the storm, there were about eleven people indicating a need and hundreds that had offered to help anyone who needed it.

Here is some more devastation footage, to help get a sense of scale:

Watch one of the Ottawa City Councilors, Jan Harder, talk about the community response:

For reference and a sense of scale, here is a city map, where the city center lines up with that great big blob of red near the river. Red signifies area without power. 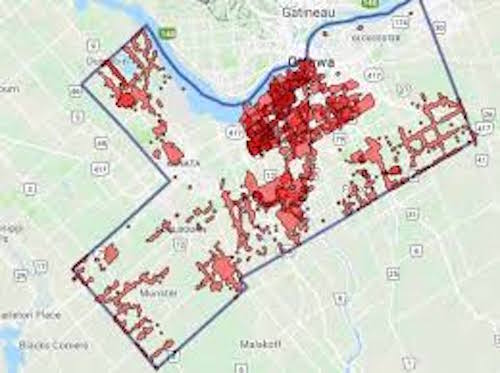 That city boundary represents a land mass similar to that of Jacksonville’s city boundary. (That’s bigger than you might expect.)

And one more time, with all that power out, there was NOT ONE LOOTING.

Ottawa didn’t need to paint those ‘no looting’ signs. Or “looters will be shot”. 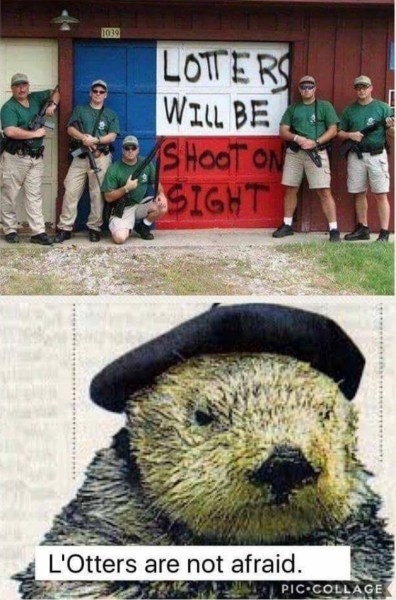 It’s not a gun ownership thing. Between hunters and gang members, there would be plenty of guns to go around, if that was the driving factor.

The big question worth asking is, why is Canada not looting when hardly a crisis goes by in any major American city when we’ll see people swarming in and grabbing things they don’t really even need. Not just high-end stuff like TV’s, but dumb stuff, like armloads of sneakers, or loaded boxes out of a dollar store.

It isn’t a race thing, either, because Ottawa is about as multi-national a city as you’ll find anywhere in the world.

People go there whether as paupers or princes and anywhere in between looking for a fresh start. Some of them with advanced degrees, some of them who had only ever lived in a refugee camp before moving to Canada.

And it isn’t as though Canadians are unfamiliar with public unrest. Just think back to Vancouver when they got knocked out of the Stanley Cup Finals by Boston. That got ugly.

Maybe someone has a better answer, but the best explanation this humble scribe can offer is this: Canada hasn’t had generation after generation where one segment of society has been pitted against another. Where a sense of entitlement and resentment sets in believing that ‘the man’ (whoever that HE is) got fat and happy on someone else’s misery and suffering, and that they somehow ‘deserve’ whatever misfortune, damage or theft may follow.

It could be that. Or maybe Canadians haven’t been taught to hate the police.

Are these attitudes filtering into Canada?

Sure. But only insofar as Canada is culturally downstream of Hollywood and American Universities. They are being taught to embrace ‘white privilege’, ‘Occupy Wall Street’ thinking, and anti-police protests and all the rest.

But it hasn’t been the air they breathe in Canada.

The activists keep telling us… “hate is taught”, don’t they?

Because when “it” really hits the fan, and life goes sideways for a city, which city would YOU rather live in if you had to turn to your neighbors for help?

2) What are you going to do about it?