The singer posted a photo of her with her 4-month old baby and she was hit with internet hate.

The photo showed James nursing her baby while she was holding a full glass of wine. She captioned it, ‘Cheers b*tches’.

I must say, I love that so much. 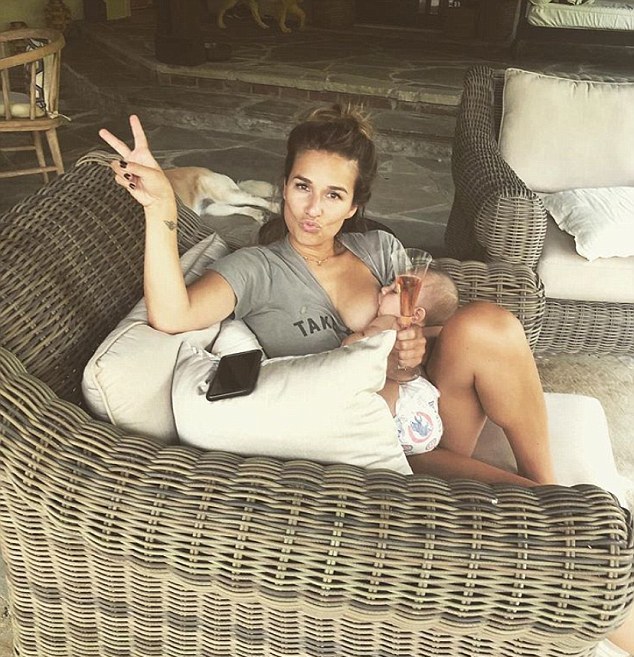 When the hate came a-rollin’ in, she just rolled with it.

You can’t make everyone happy, and well, maybe someone should tell them that they’re JUDGING INSTAGRAM PHOTOS.

‘I honestly feel like I’m the voice of all the moms,’ she told People on Wednesday. ‘I definitely feel like they get heat for certain things.

She added: ‘So if I want to have a cocktail to celebrate my husband doing something great in his work, I’m going to, and I can still breastfeed.

‘I feel like I want to be a voice for those moms that feel heat from others, or feel judgment because this is a hard job, and if you want to enjoy yourself you do it.’

For those of you that are offended by the photo and Jessie’s ‘whatevs’ attitude, I have bad news… she’s right.

There are tons of people online that are angry with James for posting the photo.

But what do the real experts say?

A glass of wine is nothing to worry about.

A recent opinion piece posted on Today’s Parent begins by explaining how moms are constantly judged by themselves and others.

“From the moment you get pregnant until your kids grow up, you live with guilt. Mothers have a tendency to blame themselves for many things that happen to their kids, whether it’s warranted or not,” says Catherine Pound, a paediatrician at Children’s Hospital of Eastern Ontario in Ottawa. “Anything we can do to understand the stress that mothers feel can help. I would be very careful about chastising any woman for having an occasional drink. She shouldn’t feel guilty. She should be able to enjoy it.”

It goes on to explain why a glass of wine once in a while is no biggie.

When a nursing mother has a drink, the alcohol level in her milk will be the same as in her blood—and that becomes even more diluted when the baby metabolizes it. “We’re talking super small amounts if the amount consumed by the mother is small,” Pound says.

How small is that? A review of 41 studies in the journal Basic + Clinical Pharmacology + Toxicology states that “even in a theoretical case of binge drinking, the children would not be subjected to clinically relevant amounts of alcohol [in the breastmilk].”

This isn’t permission to get plastered. “If you want one drink four or five times a week, you can do that,” Carson tells me. “But it doesn’t mean you can save them all up and have them at once.” Ultimately, he’s not concerned about alcohol in breastmilk, he says, but with a mom’s ability to care for her baby when she’s had too many drinks. The risk of falling, dropping or forgetting your baby increases, while reaction time slows way down. Bed-sharing is not recommended after drinking due to links with Sudden Infant Death Syndrome. “Just like you don’t want to drive impaired, you don’t want to be impaired and doing childcare,” says Carson.

An occasional glass of wine with dinner is far different from a weekend bender. One is safe, and one is not.

Whether it’s a patio pint or a single margarita with your burrito, nursing moms should feel free to raise a glass. “New moms who are breastfeeding should feel happy and confident in what they’re doing,” Carson says. “It’s the right thing to do, and they should get on and enjoy their lives while they’re doing it.”
Source: Today’s Parent

So, it’s a big deal over nothing… and for all the judge-y internet strangers who feel the need to call her a ‘bad mom’?

Does a drink while nursing offend you?