What happens when a ‘theoretical’ socialist like Bernie Sanders or Alexandria Ocasio-Cortez comes face to face with someone who has lived under the boot of socialism? This does.

Garry Kasparov is a Russian chess grandmaster, a former world champion, and said to be the greatest chess player of all time. He once played against 32 computers simultaneously — and beat them all. He retired in 2005 and became a writer and speaker. He now opines on chess, artificial intelligence, and politics.

Kasparov’s grandfather was a committed member of the Communist party and he later followed in his footsteps. When Kasparov was 13 and traveled to Paris for a chess tournament, he began to question the political ideology. It’s funny what a glimpse of freedom can do.

If you’re wondering where his politics lie today, here’s a hint: he has written about the need for a group of democratic countries only to replace the United Nations. He has called the U.N. is a ‘catwalk for dictators.’

You’re about to love this guy. 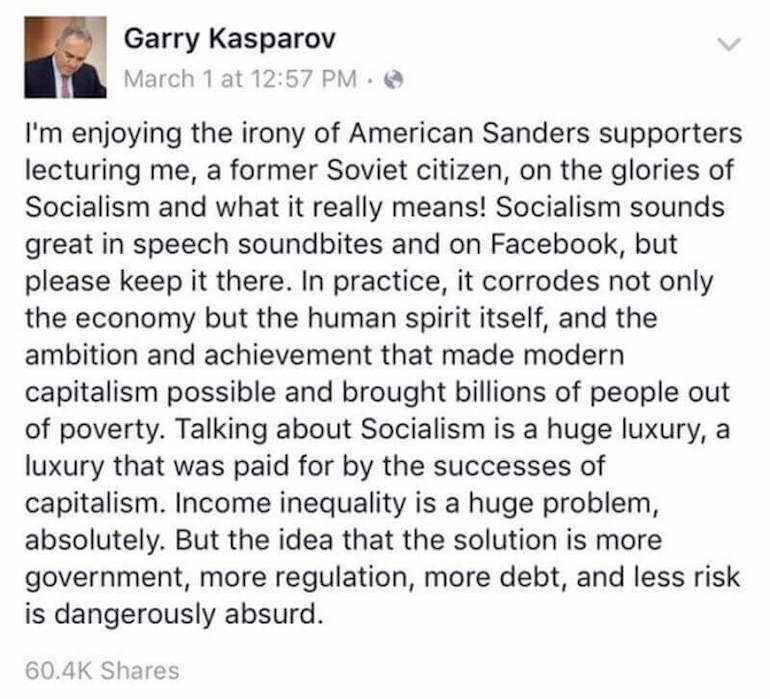 I’m enjoying the irony of American Sanders supporters lecturing me, a former Soviet citizen, on the glories of Socialism and what it means! Socialism sounds great in speech soundbites and on Facebook, but please keep it there. In practice, it corrodes not only the economy but the human spirit itself, and the ambition and achievement that made modern capitalism possible and brought billions of people out of poverty. Talking about Socialism is a huge luxury, a luxury that was paid for by the successes of capitalism. Income inequality is a huge problem, absolutely. But the idea that the solution is more government, more regulation, more debt, and less risk is dangerously absurd.

Why anyone would vote for a socialist party is beyond me.

The champagne socialists that have more money than brains say that they want people to pay their ‘fair share,’ but their intrepid leader, Bernie, isn’t so generous with his cash.

And as for the blue-collar workers, sure there’s that whole picking the pockets of the rich thing, but if Venezuela, North Korea, Cuba, and every other socialist/communist country ever is an indicator, it’s those with the lowest incomes that are hurt the most… and the fastest.

After countless of comments on the glories of socialism and how the Bernie Sanders ‘Democratic Socialism’ isn’t the big, bad guy that Kasparov claims it is, he responded to those that advocate looking to Scandinavian socialism.

That was perhaps a better answer, honestly.

Yes, please take Scandinavia as an example! Implementing some socialistic elements AFTER becoming a wealthy capitalist economy only works as long as you don’t choke off what made you wealthy to begin with in the process. Again, it’s a luxury item that shouldn’t be confused with what is really doing the work, as many do. And do not forget that nearly all of the countless 20th-century innovations and industries that made the rest of the developed world so efficient and comfortable came from America, and it wasn’t a coincidence. As long as Europe had America taking risks, investing ambitiously, and yes, being “inequal,” it had the luxury of benefiting from the results without making the same sacrifices. Who will be America’s America?

That’s why we need to protect capitalism and innovation here in America.

So, the next time some young, iPhone toting, Starbuck’s sipping, ‘Democratic Socialist’ who got his/her/zir’s Ché Guevara shirt on Amazon Prime tells you that socialism is the wave of the future, you can show them what Kasparov wrote.

And then tell them to vote Republican.