Rosie just went full Rosie. You NEVER want to go ‘full Rosie’. She needs to put down the phone and seek help.

With the passions of the Kavanaugh hearings near their peak, Rosie showed us exactly what kind of irrational whackjobs the other side attracts.

If their ‘leaders’ play Spartacus on TV, what can we really expect of their followers?

Not only are there large Soros-funded groups of protesters deliberately putting ‘maximum pressure’ on disrupting and derailing the process — including the protesters that flooded the halls of the Senate, and harassed the Senators during the hearings itself, but countless talking heads in the Media(D) and Twitter have been pressing for Americans to kick Due Process to the curb and have emotions drive every decision.

Some of these are the same Antifa-connected shmucks who gathered protesters to drive Ted Cruz and his wife out of a restaurant to pressure them NOT to support Kavanaugh.

So what are the rules of their partisan game? It suddenly ‘OK’ to throw around homosexual slurs?

Or do leftists just get a pass because nobody expects good behavior out of them?

Maybe a better question is this:
Why does Hollywood think about the fact that Rosie thinks accusing someone of being homosexual is an insult? Where’s Dan Savage and his ‘It Get’s Better’ schtick on this one?

Rosie — of course — read that tweet in the most jaded possible way. It ‘proves’ (in her diseased imagination) that he ‘doesn’t listen’ to victims. He’s the patriarchy, you see. He’s a ‘gay’ idiot, you see.

Did you catch that, everyone? It sounds like she just claimed Gay Men are the Patriarchy.

Maybe she thinks that’s why they don’t date women.

Here it is, in her own words: 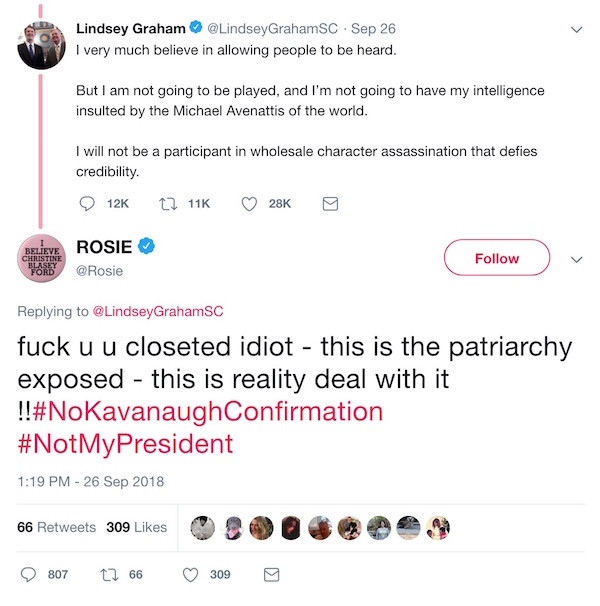 She’s not the only one throwing out that particular jab, either.

With John McCain’s body barely cold in the ground, Bill Maher went one further on his show, as part of believing Ford unequivocally, and presuming the worst about the man she accused.

Roseanne was ‘erased’ not only from her show but from syndication and TV history entirely for statements far less malicious than either of these.

But Rosie will keep her blue check mark because the Left can do no wrong. And Maher didn’t actually ‘insult’ someone. He told a joke. Like Rosanne. Whose career was destroyed.

The term “Double Standards” doesn’t even BEGIN to describe it.

Why does the left so passionately hate a guy who the Right usually writes off as a milquetoast and nondescript ideological ‘squish’?

What suddenly poked the left’ little hornet’s nest of indignation to put HIS name in their mouth?

It probably had something to do with this:

The Costco-Sized can of whoop-ass he opened up during the hearings.

The saying is, if you’re taking fire, you know you’re over the target.

In that case, Senator, welcome to the ‘war’.