Every other President goes away gracefully so that the next guy can govern. But like gum on the sole of your shoe, Obama just won’t go away.

He stopped in to blast Trump, and to talk about his favorite topic:

And he came back just in time to piggyback on the infamous ad campaign of another race-baiter… Colin Kaepernick. 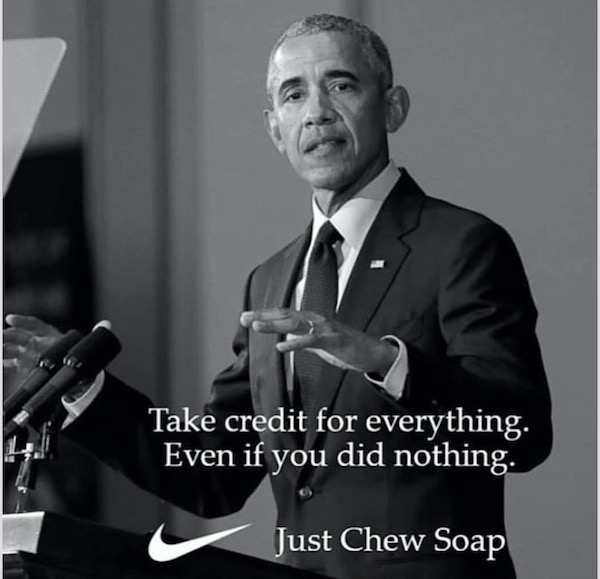 The guy who stood up and told every businessman and woman that ‘you didn’t build that’; the one who told us that jobs weren’t coming back, that low-level growth is ‘the new normal’ and that Trump doesn’t have a ‘magic wand’ to fix the economy … did what he did best.

He came in to announce that HE was the miracle that made this economy happen.

Which means, of course, he would have us believe Trump is just basking in the greatness of Obama’s glory.

What else should we really expect from the guy who told us that the day of his Primary election would be remembered as the “moment when the rise of the oceans began to slow, and the earth began to heal?”

He also spouted some other nonsense including that “rise in jobs” that never panned out.

He knows that he only gets two terms, right? And that having royally screwed up the first two doesn’t mean he gets to ‘mulligan’ and get another term as a do-over?

Everyone else is hard at work undoing the train wreck he left behind.

Can Obama just go away now?