“The era of the Wild West in social media is coming to an end.”

So said Virginia’s Senator Mark Warner about regulation being in the cards.

Twitter’s CEO is on the hotseat this week as he answers questions about shadowbanning to Congress, as lawmakers decide how to proceed with Tech Giants obvious attempts at manipulating the digital public square.

And just like that, all the Stock Market growth they’d gained over the summer melted away like frost in the morning sun.

The pair appeared before the Senate Intelligence Committee as Russian election meddling continues to loom over Congress with the mid-terms just two months away – and the value of both company stocks took an immediate dive.

Twitter’s stock plunged 6 per cent during Dorsey’s testimony. By early afternoon, it was off 5 per cent.

Early in the hearing, panel vice chair Sen. Mark Warner of Virginia said regulation is in the cards.

‘Congress is going to have to take action here,’ said Warner, who was a telecomm investor before he came to Congress. ‘The era of the Wild West in social media is coming to an end,’ he said.

Share prices of Twitter are hovering right around those lows they saw after Trump took specific aim at their practice of shadowbanning. 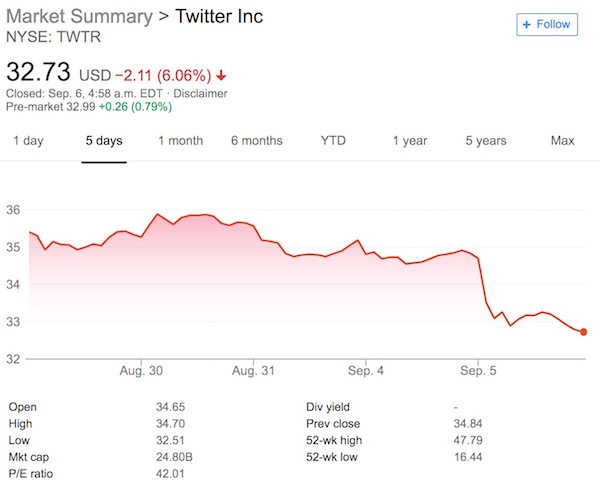 Here’s another one, taken later in the day, over a longer timeline. 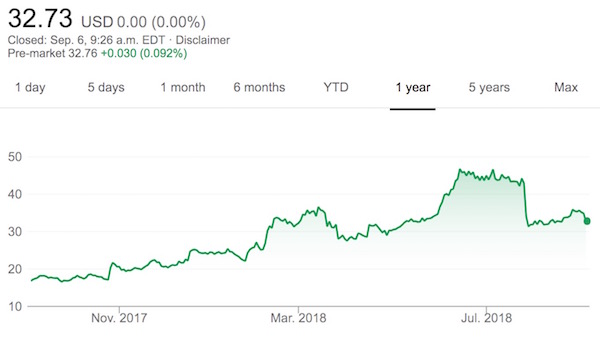 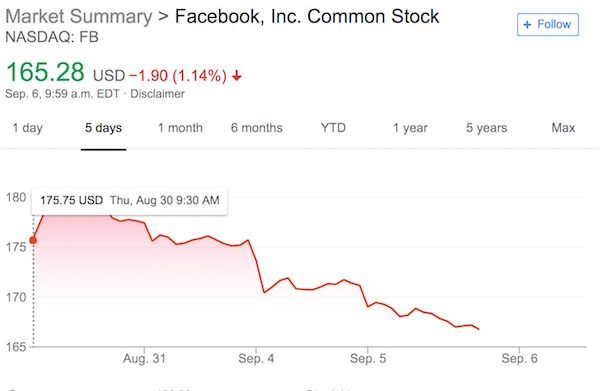 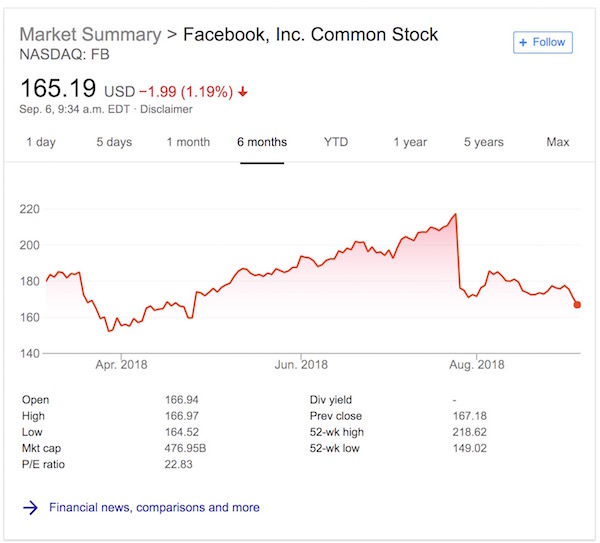 The Senator raised the question of regulation. That’s a topic of particular interest to those of us on the Right.

On one hand, we chafe at their ability to choke off the reach of right-leaning people and entities whose messages they dislike, but on the other hand, is this REALLY something we want some government flunkie overseeing?

Haven’t we had enough of ‘Deep-State’ interference?

That was the reason Ted Cruz was asking Zuckerberg those very specific questions in those hearings. The issue is big enough that here are three relevant links to get up to speed.

The short summary of the Publisher/Editor question itself:
Ted Cruz’s Questions For Zuckerberg Were Pure Genius — Here’s Why

Hey Texas — you’re not seriously going to pick that guy in the dress over Ted Cruz, are you?

Is making them choose between being ‘woke’ and being ‘open’ the way to get through this without it becoming embedded in the DC swamp?

Is the "Platform Or Editor, pick one" angle the right way to handle Tech censorship?