The Internet has been mocking Anderson Cooper for his bogus, staged ‘flooding’ pics he had taken during hurricane coverage from years gone by.

And he’s getting pissy about it.

It’s bad enough that the company’s ratings (down 41% in daytime ratings since this time last year) have become a mockery of that old slogan of theirs ‘The Most Trusted Name In News’. Now they’re mocking Anderson himself.

He’s complaining that old footage of his is being wrongly attributed to him as his coverage of Hurrican Florence.

If only Anderson were in the business of news, he might be able to tell the story of what really happened.

A Weather Channel reporter was ‘heroically’ struggling to stand as he gave us his reporting on Hurricane Florence.

Unknown to him, two people strolled down the street through the frame behind him. They didn’t seem bothered by the wind at all.

This is the weather channel in a nut shell ???????? #florence pic.twitter.com/imZyzGGWpi

Of course, that made “Fake Weather Reporters” the meme of the day. Naturally, people went looking for past examples of fake weather reporting they could use in other memes. That’s where Cooper enters the story. ‘Poor’ Anderson Cooper got hammered by it for his footage during Hurricane Ike, in Texas, 2008.

That’s how stories take on a life of their own on the internet.

And he learned an important lesson about context.

In just the same way that most of CNN’s reports that defend the Left or defame the Right, (the doctored footage ‘reporting’ Trump feeding fish in Japan comes to mind), he gets a lesson that a narrative given without the proper context can leave people with the wrong impression.

When you have the real deal, you don’t have to fake that there’s 3’ of water by standing in a ditch when there’s 1’ of water in the road! pic.twitter.com/clryKr8Tr3

Donald Trump Jr had fun with the already-popular image and used it to bring attention to the same sagging television ratings numbers we referenced, above.

It’s a shame that CNN’s ratings are down 41%. What’s worse is there’s a simple solution that they refuse to accept. Stop Lying to try to make @realDonaldTrump look bad. https://t.co/O3XyWchsJh pic.twitter.com/BCUCxKnOvO

He wasn’t the only one to have fun with it. Photoshop got involved.

But as we learned in the CNN’s outrage over that Wrestling meme, they have no sense of ha-ha when it comes to being mocked.

They take themselves VERY seriously… however ridiculous their reporting may be.

He wasn’t fake news, you see. He was showing viewers that water is deeper in a ditch than it is on a street. #CrackerjackReporting. Did he report on whether that water was also ‘wet’? Don’t keep us in suspense!

"The idea I am kneeling in water to make it look deep is idiotic." @AndersonCooper debunks the lies being spread by Donald Trump Jr., and others who falsely claimed he and his team exaggerated the severity of Hurricane Florence. #KeepingThemHonest https://t.co/j2HptrYpe0 pic.twitter.com/zwfvIXCsIY

And we also wonder why was there another photo of him standing beside someone else in that same ditch, if he wasn’t really trying to make the water seem deeper than it was.

They couldn’t have stood six feet in front of him, where the water was only a few inches deep? #Narrative 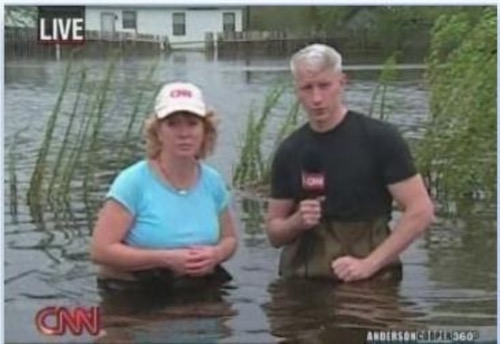 There was a brief Twitter war between CNN’s PR people, and Donald Trump Jr.’s.

The only garbage I see is @AC360 outright lying about Don Jr. supposedly saying the viral pic was from Florence. He literally did no such thing.

The "evidence" CNN provided on screen doesn't even reference Florence. You guys can't even fact check without spreading #FakeNews.

Is there a reason Anderson Cooper’s team is taking this so personally?

Maybe THIS is a clue..

Anderson is lashing out because Don decided to sit for an interview with ABC & their twelve million viewers but laughed at the interview request from Anderson & CNN’s twelve viewers. https://t.co/aWofJQCFkf

Oh well. Whoever ends up being the last to leave, don’t forget to turn out the lights.