Good news! Not everyone in High Tech has quaffed the Left’s Kool-Aid.

Most have, but not everyone.

In fact, the guy who gave us Minecraft isn’t just “outspoken” about being Conservative.

That would have been a minor miracle in the high tech sector.

But Markus Persson — that’s a name you may want to remember in the future — really hit the Left where it hurts. He kicked them right in their unearned moral superiority.

What did he have to say about them?

And when someone gave him an ‘out’, to pin it on their radical ideology? He made his meaning pretty clear: 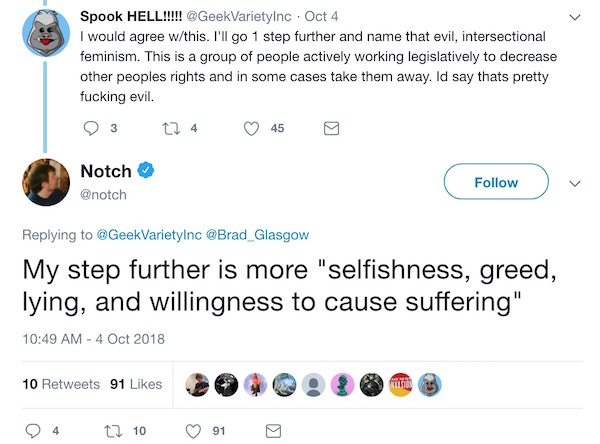 Looks like someone was watching the coverage during the Kavanaugh hearings.

The media were proclaiming him a rapist and drunk — without ANY supporting evidence.

Elected officials were Doxxed and made to feel unsafe in their homes.

Feinstein and Co. COULD HAVE discreetly looked into Ford’s claims, without going public. But they turned it into a circus with a negative impact on both Ford AND Kavanaugh.

Even Hillary is now on record saying the only way the Left will be civil again is if they take back the reigns in the House and/or Senate.

So, this unrestrained rage is their natural state then so long as they aren’t in power? It sure sounds like an addict denied his ‘fix’, doesn’t it?

Lindsey really was onto something, wasn’t he?

?BAM?
"Boy, you all want power. God, I hope you never get it. I hope the American people can see through this sham." – Senator Lindsey Graham to radical liberal Democrats
Let's make sure they don't get ANY power!#Kavanaugh #MAGA #KavanaughConfirmation#KavanaughHearings #tcot pic.twitter.com/jgw3dMOPpJ

How evil is the Left?

We once covered a story talking about how Democrats go Zero-For-Ten on the Ten Commandments.

If You Are In The Market For A Good .44 Magnum…Then Check These Babies Out
Great American Outdoors