So what’s the deal here? Megyn fired over suggesting you can dress up like black stars you admire, but Silverman, Fallon and Kimmel can get away with this?

You know things have gotten weird when Cenk from The Young Turks agrees with ClashDaily about pretty much anything.

But here his is agreeing that the PC police running Megyn Kelly out of town on a rail was a bad idea.

I can't believe @megynkelly was fired. I 100% disagree with the decision. I think what she said was wrong and I totally disagree with her politics but firing her over that comment is not remotely the right way to handle this. Talk about it on-air instead! More speech, not less.

Was she really fired over the Blackface comment — maybe. After all, we saw what the boycott brigade can do when they hit high gear. This MIGHT have been preemptive damage control.

Alternatively, it may have been a handy excuse to get rid of her for other reasons. Maybe because her ratings weren’t what they had hoped, or people were pissed about her defending Kavanaugh against the kangaroo court that was trying to defame him.

Not only did Megyn Kelly apologize for what was intended by whoever was dressing up in the costume as a way of showing admiration for Diana Ross, but she was open to criticism, and showed herself open to learning perspectives she had not previously considered.

That was not enough to satisfy the PC Inquisition.

On the other hand, Sara Silverman was asked about any past jokes she regretted making. She said there were cringy ones that she looked back on, but not that she really regretted, because it’s just a sign that she’s growing.

Then she gave this example: 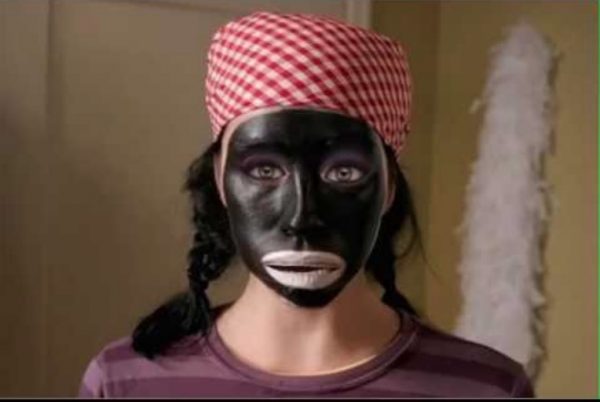 So, Megyn did a Mea Culpa and got unceremoniously dumped anyway.

But not only is Sarah Silverman still a “respectable” Hollywood personality but there are two other High-Profile late night comics still beloved to the left who wore blackface and played to every negative stereotype in the process.

Jimmy Fallon, for example, had this performance in front of a very unimpressed audience. The pained expression on the faces of black audience members said it all.

But, in our opinion, the far worse example was the “Leftist Pope”, Jimmy Kimmel.

Kimmel, while the host of Comedy Central’s “The Man Show,” dressed up more than once in blackface makeup, a bald cap and a body suit to portray former Utah Jazz basketball star Karl Malone as an inarticulate, dim-witted person who had difficulty pronouncing words correctly.
Source: DailyCaller

If we live in such a sanitized world where nobody can say anything that’s remotely ‘unsafe’, we can’t advance as a society.

Have we forgotten there was once a time that opposing slavery was ‘unsafe’ to do?

Have we forgotten that questioning governmental authority was once ‘unsafe’ to do — and in many places, it still is, just ask Google who’s making a special search engine for China that will block dangerous search terms like “Nobel Prize” or Winnie The Pooh.

Have we forgotten that comedy and satire (See: Jonathan Swift, Alexander Pope) are some of the most effective ways of making people question assumptions they would otherwise aggressively defend?

Even Jesus used sarcasm and humor to mock the power-brokers of his day.

But because it’s *supposedly* about protecting people from hurt feelings, the left calls this a good thing.