The only real good news that we have to report about the event is that it’s now over with the killer in custody.

It should go without saying that it is an act of singular cowardice to attack a group of unarmed people while they are gathered at prayer.

This is, according to the Anti Defamation League, among the deadliest against the Jewish community in the United States.

Three police officers are numbered among those who were killed.

It began as a typical Saturday morning at a suburban synagogue outside of Pittsburgh, until it unexpected turned tragic.

Reporters covering the story were hard-pressed to name any instance of synagogue violence with a more tragic outcome than this one.

SWAT was on scene and telling neighbors NOT to look out their windows, for safety reasons.

ALERT: There is an active shooter in the area of WILKINS and Shady. Avoid the area. More info will be released when it is available.

While everyone else was running away from the danger, many of our finest were headed right for it.

While the guy with the gun was reportedly saying ‘All Jews Must die’.

BREAKING: Multiple senior law enforcement officials briefed on the Pittsburgh synagogue mass shooting investigation tell NBC News that a dozen people are reported to have been shot, including police officers, and there are deaths. https://t.co/DPFmWxcRud pic.twitter.com/0yFwqhU5bK

A suspect was in custody on Saturday morning after a fatal shooting with multiple casualties near the Tree of Life Synagogue in Pittsburgh, where Sabbath services were taking place, according to local officials.

At least eight people were reported to have died in the shooting and 12 were injured, three of whom were believed to be law enforcement, according to preliminary information from multiple senior law enforcement officials

It is believed the suspect was armed with an AR-15-style rifle and multiple handguns.

Pittsburgh Police Commander Jason Lando said there were multiple casualties and said it was imperative neighbors in the surrounding area sheltered in place.

“Do not come out. It is not safe,” Lando said.
Source: NBC

Early reports are that the attacker was one ‘Robert Bowers’, 46-year-old white guy.

[Editor’s note:]
While we originally hesitated to go into detail about the shooter’s social media, instances of people on Twitter suggesting this was somehow Trump’s fault gave us reason to include some aspects of his social media interactions. This tweet sums up what we’re hoping the public reaction to this gruesome attack should be:

Alleged shooter in Pittsburgh did not vote for Trump and showed his hatred for Trump in other posts.

Was obviously motivated by his disgusting anti-Semitism and nothing more.

Should be treated as a terrorist attack because it's religiously motivated. pic.twitter.com/bidBBaoAEo

It is noteworthy that we are already seeing reports of someone by that same name posting antisemitic content on social media.

The claim Starbuck is making is that while he was archiving these tweets, the social media account @onedingo was scrubbed.

The content on the account he posted screenshots of certainly is consistent with someone hateful enough to start murdering a community of strangers at worship.

Being very clear for media picking this up, this man Robert Bowers was named on police scanner, found his profile, last post was this and his social media account was wiped while I was archiving it. His account was anti-Semitic conspiracies and anti-Trump posts/conspiracies. pic.twitter.com/uRNfWAEWLW 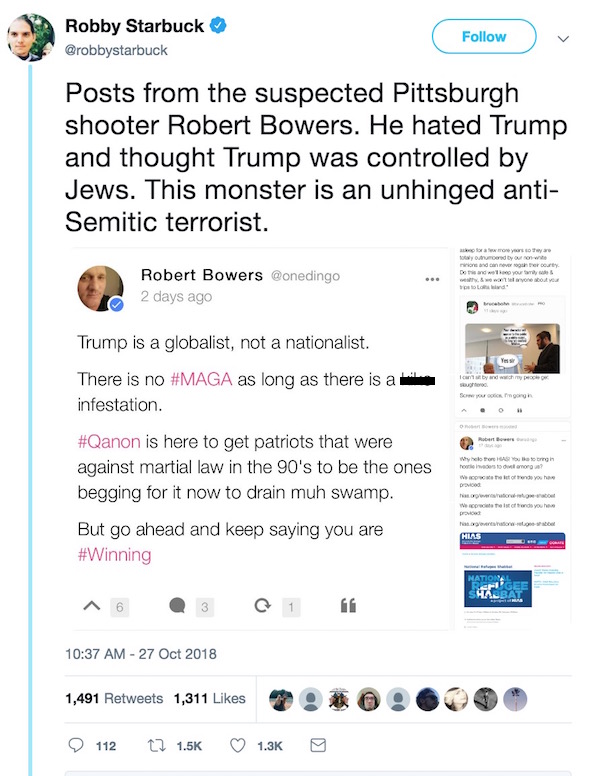 Another post from Pittsburgh Synagogue shooter Robert Bowers. His profile clearly illustrates that he’s a Nazi, admired Hitler, hates Trump, believes Trump is controlled by Jews, he did not vote for Trump. That’s all I was able to archive before his profile was wiped. Sickening. pic.twitter.com/DPQfGuWDzY

Looking up the posting of the user going by the name ‘cashmoneyglock’ in the screen-capped social media exchange, we found the comment thread Starbuck cited in his tweets.

One comment is, in fact, now missing from that thread. The rhetoric against both Jews and Trump is both unmistakable and inexcusable. 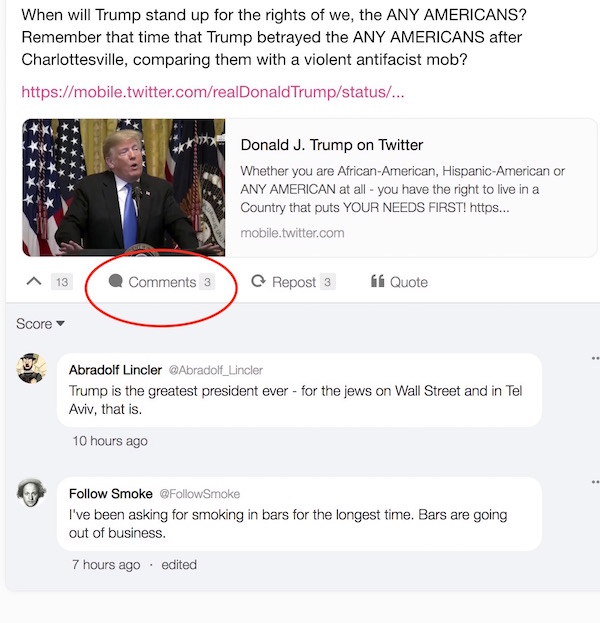 Here’s a link from a Gab archive.