Loving abortion is considered ‘proof positive’ that someone is ‘for’ women and their rights. So, what’s the math when a male abortion activist drops a pro-life girl with a roundhouse kick?

Is his ‘violence against women’ justified because the girl he knocked ass-over-teakettle is … what’s that feminist version of ‘uncle tom’ again? Oh, yes. Because she’s “Aunt Lydia”? Does that justify his violence?

This is where that stupid ‘bash the fash’ culture is taking us.

People who disagree with on “this” or “that” political value get written off as being somehow sub-human and unworthy of basic respect and courtesy.

Acts that would be considered antisocial or even criminal against anyone else are given a veneer of being somehow ‘for justice’ or the greater good.

But check out the panic when this guy’s taunting and disrespect goes too far, and he realizes he’s just been recorded kicking a woman in the face because he doesn’t like her ideas.

Here is just ONE of the many social media shares ‘making him famous’ so that authorities could locate him.

Predictably, the coward — as you might expect a gutless, nutless bully would — fled the scene.

He has not yet been found, RT!! pic.twitter.com/k1XlXBCVRP

And the police in that city seem like they have been neutered, too. Is it because she’s pro-life?

Isn’t it their job to protect ALL law-abiding people from ALL violent offenders? They’re as hopeless as the cops in the UK!

“This guy comes up and I guess he sees what’s going on, and so he took out three markers and he drew on two of our signs, and so I shouted, ‘Protect your signs,’ said Bissonnette. “I guess that gave him the idea to start scribbling on people’s backs, so he scribbled on five people’s backs.”

That’s when Bissonnette said she pulled out her phone and started recording. Cellphone video, later posted to YouTube showed the unidentified man asking a hypothetical question to Bissonnette about whether or not a raped teen should have an abortion.
[…]
“I did not see it coming. I didn’t anticipate any violence,” Bissonnette said. “As soon as he kicked me, the only thing I could think of was to get the police, make sure someone calls the police.”

But when officers arrived on scene 10 minutes later, Bissonnette said the man had already fled and police seemed reluctant to help.

“I told them what happened and showed them the video and they said, ‘What do you want us to do about it?’” said Bissonnette. “Just the way they phrased things kind of leaned towards encouraging me not to press charges.”

Bissonnette said she intends to file a complaint.
Source: GlobalNews 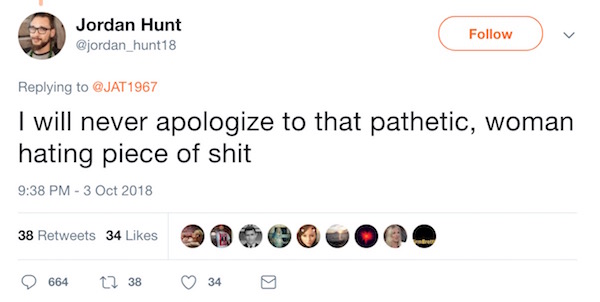 Bissonette made it clear she was filming the protester and informed him he had just destroyed private property, at which point he became belligerent and began questioning Bissonette on her opinions of pregnancy due to rape. When she began to answer, the protester wound up and roundhouse kicked her, causing the phone to drop. In the background, cries for someone to call the police could be heard along with the protesters insistence he was aiming for the phone.
Source: Human Defense

He’s a hairdresser. And the same site that filled in the details about who and where also let us know he’s already begun to pay a price:

Here they are on Instagram doing the right thing:

It turns out that ordinary people really don’t LIKE it when men (or in his case, what passes for one) beat the hell out of women who are smaller and weaker than them. They like it even less when they turn tail and run.

Oh — Jordan “ONLY” meant to kick her cell phone, did he? And supposing he smashed it, would he have ‘gladly’ paid restitution? Or would he run away, leaving her out however many hundreds of dollars the phone was worth? (We already know the answer to that question, don’t we?)

All because he wanted to have a self-righteous hissy-fit.

Why is the Liberal worldview a problem? Because it excuses people to close their mind and lash out against anyone who challenges their ideas.

And they DARE to call the RIGHT ‘faschistic’?

If you know some toad who thinks Jordan’s Ends-justify-the-means violent inclination in service of abortion or any other liberal objective is a GOOD idea, show them this video:

This particular event happened in Toronto. But these days, it could just as easily have happened in Portland, Chicago, or Berkley. Or practically any college campus.