We’re told that the migrants are all just sweet, innocent refugees looking for a better life. This guy in the caravan says that that’s not completely true.

Now, let’s be clear — the migrant caravan that is heading from Honduras and Guatemala through Mexico and to the United States, is likely mostly comprised of good people that are looking to get out of Dodge and really and truly have a better life in a safer country with more opportunity.

That is a no-brainer.

This is precisely why we need ‘extreme vetting’.

But the Democrats want zero vetting, because of an inscription on the Statue of Liberty.

Last time I checked, sentimentality isn’t the law of the land.

Immigration, when controlled, is a good thing. And I don’t think there’s really anyone that is truly against legal immigration, the problem is the lawlessness, and the opportunity for ‘bad hombres’ to abuse the hospitality of a United States that doesn’t control its borders.

Besides, illegal immigration isn’t humanitarian. It forces people to live on the fringes of society forever. Is that compassion?

And if we do try amnesty, how is that fair for the people that are trying to come into the country the right way?

Don’t forget the Mariel Boatlift. In April 1980, bad hombre, Fidel Castro had emptied his jails and mental institutions and shoved them all in boats to Miami, with disastrous consequences for Miami.

But still, clueless bleeding hearts will continue to push that immigration law is ‘racist’.

That’s incredible when you think about it.

All those people planning to flout immigration law and not a single criminal among them. Statisticians must be beside themselves.

Watch this migrant within the caravan admit that there are indeed ‘bad hombres’ on the trek to the U.S.:

He does say that not all of them are criminals, but that was never the charge.

Fox News: "About 80 percent" of those in the migrant caravan "are men under the age of 35." pic.twitter.com/hbxywq1ioL

The Press Secretary for the Department of Homeland Security tweeted out some scintillating details about the migrants, which I’m sure that the Media (D) will: (a) brush aside; (b) claim is false, or (c) completely ignore.

.@DHSgov can confirm that there are individuals within the caravan who are gang members or have significant criminal histories.

Citizens of countries outside Central America, including countries in the Middle East, Africa, South Asia, and elsewhere are currently traveling through Mexico toward the U.S.

Stopping the caravan is not just about national security or preventing crime, it is also about national sovereignty and the rule of law. Those who seek to come to America must do so the right and legal way.

Look at that! President Trump is getting his information from Homeland Security officials!

These big rushes for the border are used as distractions to tie up ICE resources so that contraband can be smuggled into the United States. Perhaps NBC should look in its pre-Obama archives to find this story: 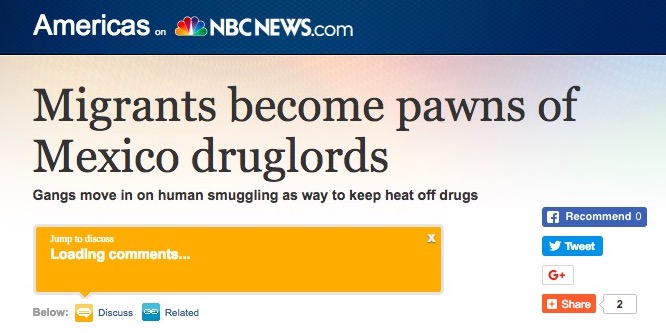 Nothing has changed except that the number of people flooding the border has grown exponentially.

President Trump has been clear that he’s not going to put up with this kind of crap.

Sadly, it looks like Mexico’s Police and Military are unable to stop the Caravan heading to the Southern Border of the United States. Criminals and unknown Middle Easterners are mixed in. I have alerted Border Patrol and Military that this is a National Emergy. Must change laws!

Guatemala, Honduras and El Salvador were not able to do the job of stopping people from leaving their country and coming illegally to the U.S. We will now begin cutting off, or substantially reducing, the massive foreign aid routinely given to them.