Never missing a chance to pile on the President, the media has taken issue with his use of ‘Nationalist’. (And here’s what they’re NOT saying.)

Monday in Texas, Trump proudly declared himself a “nationalist.” The term means that he loves the United States more than other countries, but liberal television news personalities used it as an opportunity to compare him to Hitler and declare him a “white nationalist.”

CNN’s Jim Acosta asked the president if he was sending coded messages to white nationalists by using the term, then completely mischaracterized Trump’s response. Then MSNBC’s Nicolle Wallace compared the president to Hitler for using the term. While leftists deliberately distort the meaning of the term nationalist, it’s weird how they ignore the actual truth behind the history of the “progressive movement,” which has racist and genocidal roots. We explain and explore it all.
Source: DailyCaller

I also asked Trump about the "nationalist" label he has given himself. He brushed off the notion that this means he is a "white nationalist." Video to come.

I asked Trump what does that mean when he says he is a "nationalist." His response: "I love our country."

I followed up about the concern that he is sending coded language that he is a white nationalist. Trump: "I've never heard that theory about being a nationalist."

For anyone who heard Trump’s rally speech that day — and Jim Acosta would have been there, since he was so recently complaining that covering these rallies was the “most depressing” part of his job — the message was pretty clear.

And, since covering him is ‘part of his job’, however depressing it may seem to him, he has no excuse to have missed what he meant.

Acosta picked up on Trump’s use of the word “Nationalist”, right? But isn’t it curious how he left out the context of that statement?

There’s no missing the implication in these tweets.

Acosta wants us to think Trump means he’s ‘Nationalist’ in a European sense of the word. A race-based strain of nationalism. Ultimately, he’s hinting at ‘blood and soil’, Swastikas and that infamous failed artist with a funny mustache.

If there was any doubt as to his meaning, Acosta retweeted a story that ‘went there’. 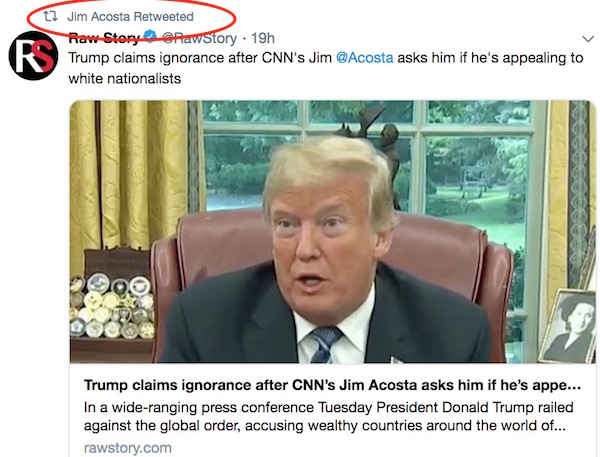 It’s not that hard to find the context for Trump’s actual statement if one is honest and wants to represent what he said with any accuracy or integrity.

(Yes, we realize that excludes the likes of Jim Acosta.)

"A globalist is a person who wants the globe to do well, frankly, not caring about our country so much. And you know what, we can't have that. … You know what I am? I’m a nationalist. Use that word."

Notice his juxtaposition: Globalism versus Nationalism.

One is based on an allegiance that favorite phrase of Obama’s: “the international community”, however slippery that term may be.

The other is based on allegiance to a specific nation.

Why does Acosta see racism in that statement?

Because for many nations — Germany, Italy, Sweden, Japan, Saudi Arabia, Mexico and so many others — there might be little to no distinction between the concept of nationality and ethnicity.

America, on the other hand, is founded on something different. It consists of people who (for the most part) came here from somewhere else. People who made the decision to break free of another nation’s oversight.

People who rallied around a set of IDEAS.

You might, if asked, be able to draw what a Mexican, or Chinese, or German or Nigerian citizen looks like.

But could you draw what an American looks like? Tall or short? Brown, blue or green eyes? Straight or curly hair? Fine or coarse features? On and on the list goes.

You can’t even narrow this down to color of the skin.

Ask yourself: If America is founded on ideas and principals, rather than uniform ethnicity and customs, is loving that country tainted by the accusation of racism in the same way it might be in, say, Germany or Mexico?

Nationalism, remember, was loving the COUNTRY more than the Global Community.

Do YOU Consider Being A NATIONALIST A Bad Thing?