Kendall Jenner keeps getting herself into these messes. Social Justice Warriors are bombarding social media with angry messages to set her straight.

Do you remember when Kendall Jenner was denounced by the left for an absolutely bizarre Pepsi ad gone wrong?

The advertisement, which was pulled the day after it released, showed a dolled-up Kendall at a fashion shoot watching as a large protest of angsty, diverse millennials walk by. She then wipes off her lipstick, takes off her wig, and changes into two-tone denim to join the crowd. She somehow fixes all race relations (or something) by handing a Pepsi to a vaguely Jake Gyllenhaal-esque police officer. All the while, ‘Lions‘ a song by Bob Marley’s grandson, Skip Marley, denouncing the haters that are ‘hiding behind guns’ and are ‘taking my rights away’, ‘telling me how to pray’, and ‘won’t let us demonstrate’ won’t stand up to the ‘lions’ that will unite against them.

People were upset because she was clearly mocking the seriousness of the Black Lives Matter movement.

In my opinion, it’s just an absolutely cringeworthy advertisement with a poorly thought out concept.

And then there was the time that she was criticized as ‘racist’ for using an emoji of the wrong skin color.

These are clearly what you would call ‘First World Problems’.

But, Kendall and her sisters have been accused repeatedly of ‘appropriating’ black culture.

So, it’s weird that she would agree to do this shoot and not realize that it would be smacking the hornet’s nest where the (alleged) anti-racists scream racism.

Promotional photos for the Council for Fashion Designers of America (CFDA) and Vogue Fashion Fund have made quite a splash — just not the way that they were intended to. People are upset that the wig that Kendall Jenner is sporting is reminiscent of an afro.

In a statement to E! News, the fashion magazine said:

The image is meant to be an update of the romantic Edwardian/Gibson Girl hair which suits the period feel of the Brock Collection, and also the big hair of the ‘60sand the early ‘70s, that puffed-out, teased-out look of those eras. We apologize if it came across differently than intended, and we certainly did not mean to offend anyone by it.

It was not intended to be an afro.

Here are the two images posted by Vogue that has caused all the fuss: 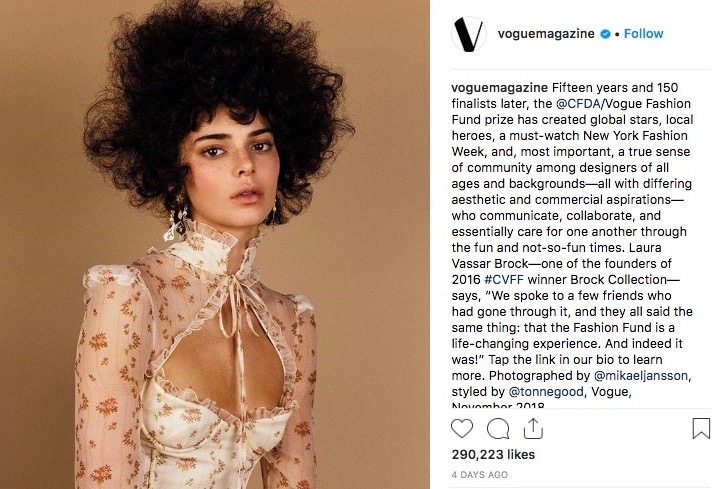 Um… Can I just state here that I don’t understand high fashion?

You take a naturally pretty girl, make her look like she just woke up from a nap in Victorian England and that’s supposed to be art?!? 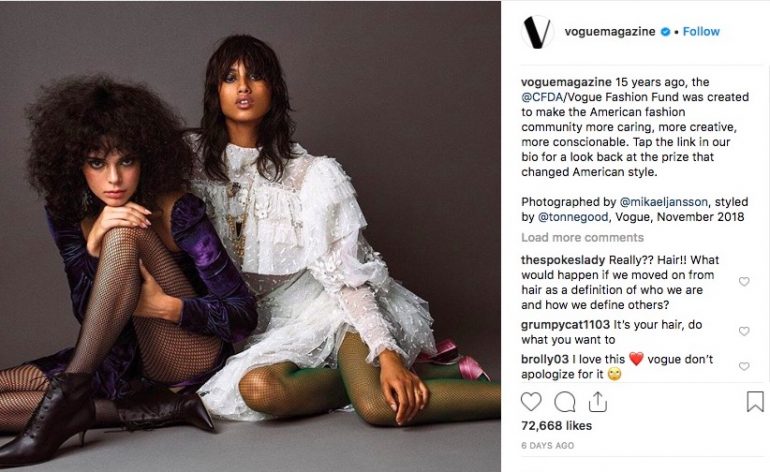 The comments on the posts were top-notch triggered identity politics devotees.

‘FOR YEARS WE have been penalized about our looks and especially our hair, It is a slap in the face when non-Blacks try to imitate our look,’ wrote one angry Instagram commenter.

‘I like Kendall but why didn’t they use an ethnic model who has hair like that,’ wrote another.

What’s ironic is that in that second photo with Jenner is Imaan Hammam, a Dutch model of Egyptian and Moroccan descent, who happens to also be Muslim. Hammam said that she was inspired by supermodel, Naomi Campbell, and she hopes to be a role model for African-Arabic girls.

I’m half Moroccan, half Egyptian, and I was born in Amsterdam. I’m Muslim, and I’m superproud of my heritage and of my roots. I want to be a role model for young girls who are struggling with racism or struggling with their looks or with their skin color. I had Naomi Campbell, who I looked up to as a black powerful woman. But there aren’t many Arabic models, and being an African-Arabic model, I’m trying to open doors for more Arabic girls.

So, the outrage police are upset that Kendall Jenner, a white woman, is sporting a wig that Vogue says isn’t an afro while sitting next to an African-Arabic Muslim model.

I have no freaking idea.