In the last 2 years, forty-eight people have been fired for allegations of sexual misconduct… but this guy gets a killer payday?

This golden parachute makes the supposed ‘tough stance’ Google is taking on sexual misconduct allegations seem a little … flaccid. Even the employees there are outraged by this news… and they’re doing something about it.

After all, $90 Million dollars is a lot of money to get paid for anything.

But if you’re paying out that kind of cash for someone to go away quietly after allegations they’ve molested a woman in a hotel room, you really should brace yourself for a healthy dose of outrage.

You should REALLY brace yourself if the company slogan is ‘Don’t Be Evil’. 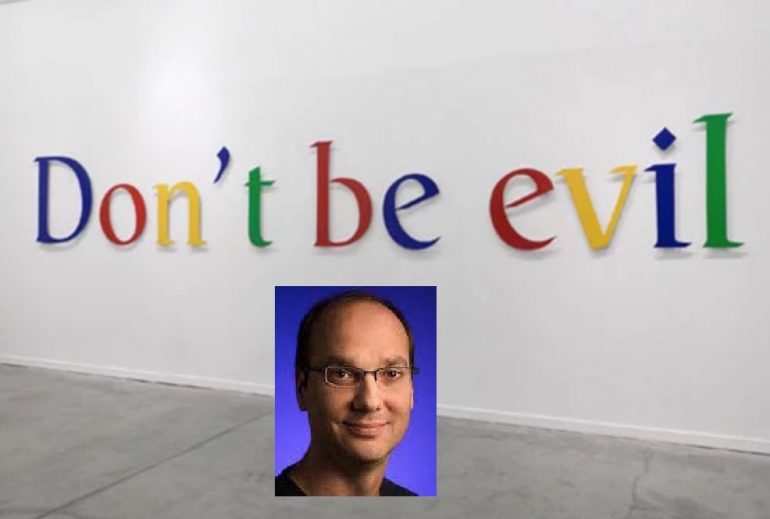 A group of more than 200 engineers at Google are organizing a companywide “women’s walk” walkout for later this week to protest recent revelations about the search giant’s protection of employees that had allegedly engaged in sexual misconduct, according to four people familiar with the situation inside Google.

The protest, which is expected to happen on Thursday, comes in light of a story by the New York Times last week into the alleged misbehavior of Android creator Andy Rubin and other executives at the company, some of whom still have positions of prominence at Google. Google gave Rubin a reported $90 million exit package in 2014, following an investigation into an allegation that he had coerced another employee to perform oral sex on him. That investigation reportedly found that allegation to be credible.
Source: Buzzfeed

The $90 Million parachute wasn’t his only big payday, either. Even after the investigation into his misconduct was opened, he was making bank in a big way.

Rubin left Google in 2014 to create, Playground Global, an incubator for hardware startups.

But following his exit, the claim was reported to Google’s human resources department and subsequently an investigation was opened.

On Thursday, The Times report claimed Rubin coerced the woman into performing oral sex in a hotel room in 2013.

But just a few weeks into the investigation, Rubin was given an additional stock package of $150million.

According to the Times, that stock package was unusually high by Google’s standards.

Eventually, Google officials found the woman’s claim to be credible.

This was their CEO’s response the original NYT piece making these allegations public.

The (Female!) employees planning the walkout don’t seem happy with the ‘answers’ they’ve been given thus far.

And who can blame them? They are the ones with the most to lose if Google policy fails to protect their staff.