Julia Ioffe is a far-left piece of work.

She’s terrified of ‘Trump’s America’ where she believes that President Trump regularly sends out ‘dog-whistles’ to white nationalists at rallies as he staunchly defends the nation of Israel and the Jewish people.

Frankly, Ioffe’s claim of the rise in anti-Semitism as the result of President Trump’s rhetoric is utterly laughable.

President Trump’s policies are quickly making him the most pro-Jewish president in the history of the United States. That’s because President Trump advocates freedom for all people regardless of religion.

But, as one of the leftist media ‘elites’, Ioffe can’t see it.

She sees President Trump as a blatant racist and a white nationalist without any evidence. Oh, and he hates the Media (D), too.

I have to say, I feel less safe as a journalist in America these days than I ever did in Russia. A lot less safe.

She laid the blame for the shooting at the feet of President Trump instead of with the shooter who claims to hate the pro-Israel policies of this administration. 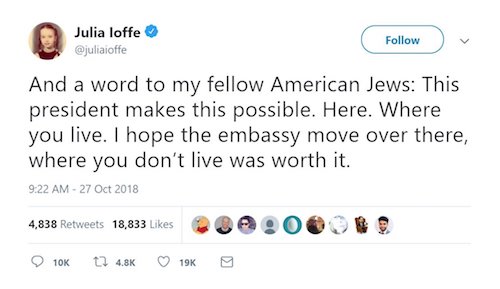 Watching @juliaioffe and @oliverdarcy discuss with @brianstelter the hate that spreads on Gab and other platforms. The hate is not new, the “supercharged” amplification is. Julia: “when the ground is fertile all this stuff blossoms” pic.twitter.com/iRAZtLjB8T

CNN’s Oliver Darcy had undertaken a systematic campaign on Twitter to get Alex Jones banned from the platform, while Julie Ioffe has been known to tweet a hateful thing or two herself.

She was fired from Politico for this beauty: 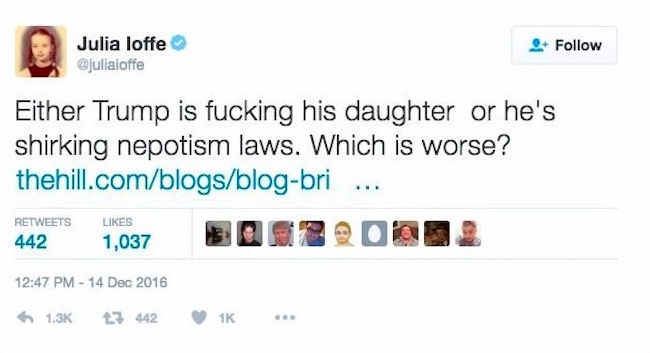 And she’s determined to lay the blame of anti-Semitism with this President.

According to the @ADL_National, the incidence of anti-Semitic attacks jumped by 57% in 2017, the biggest one-year increase since the group started gathering data.

Gentiles can just STFU on the horrible tragedy in Pittsburgh:

To all the well-meaning Gentiles telling me what to think and not go think about the synagogue shooting today: kindly shut up. Today is your day to be quiet.

Don’t you just love when your opinion is silenced because of your ethnic identity? Julia Ioffe seems to love to shut you up.

She wrote a nasty tweet in response to Glenn Beck condemning the mass shooting at the synagogue in Pittsburgh. 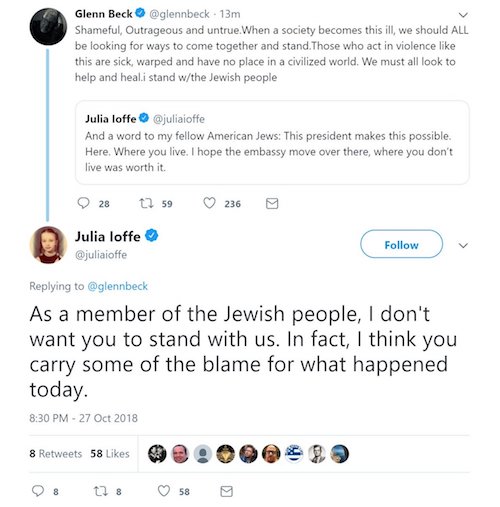 Watch Julia Ioffe make her incredibly dumb comment saying that the President is worse than ISIS:

This might be one of the most ridiculous things ever said on @CNN.@GQMagazine's @juliaioffe just claimed @realDonaldTrump has "radicalized so more people than ISIS ever did."

And oh by the way, no push-back from @jaketapper. pic.twitter.com/suFC2WKHya

To be clear, fellow Deplorables, she means you.

As host of the show, Jake Tapper was (rightly) called out for not pushing back on that incredibly ridiculous claim made by Ioffe.

Tapper defends himself by hiding behind the excuse that it’s a ‘panel discussion’.

As i explained live on air, I went right to @monacharenEPPC and @DavidJUrban to debate her, and they were eager to do so. It’s a panel not an interview.

I immediately went to @monacharenEPPC and @DavidJUrban to rebut it and later in the snow @juliaioffe apologized and took it back.

Tapper let her ‘clarify’ her comments:

CNN's Jake Tapper runs interference for far-left writer Julia Ioffe, claims the Republican National Committee (RNC) pounced on her blatantly false comments that Trump has "radicalized so more people than ISIS ever did."

And do you think that CNN has taken the opportunity to sit her down and keep her off the air for a while?

She was right back on CNN and spread some more false claims with zero evidence.

But then, it was on Don Lemon’s show, so I think that’s par for the course over there.

CNN continues to promote far-left writer Julia Ioffe after she lied on CNN earlier today, saying that Trump has "radicalized so many more people than ISIS ever did."

She made multiple false claims during the segment tonight without any pushback from CNN (THREAD): pic.twitter.com/SCqnp7AW9u

Social media was brutal, and from blue-checkmarks, too!

Within a three-day span @juliaioffe has:
• Blamed the Pittsburgh shooting on Jews.
• Said she feels less safe as a reporter in the US than Russia, where dozens of journalists have been killed since Putin took power.
• Said Trump has radicalized more people than ISIS.

Dear @juliaioffe, as someone who faced religious persecution in Lebanon, I found your comparison of @realDonaldTrump to ISIS (with him being WORSE) exactly what I would expect of a lobotomized & privileged Westerner. Well done @GQMagazine & @cnn. Unreal.

Say what U want about @FoxNews but if someone had said what this unhinged, irrational scream queen did about Pres Obama she'd never be back. At CNN, vile hate speech is okay if it's against @realDonaldTrump https://t.co/CqaCFzsJJd

What Julia Ioffe just said on CNN was absurd…Trump has radicalized more people than ISIS. Did i heart hat, right?

Come on @juliaioffe You can’t possibly believe Trump has radicalized anyone. To compare a sitting President to a terrorist group—and to say he’s worse!—is just insane and intellectually dishonest. You’re better than this. https://t.co/Rfmq4AtOlk

Remember when @CNN wheeled out @juliaioffe as an expert on civility and rhetoric just in time for her to say Trump has radicalized more people than ISIS?

*Yes, the same Julia loffe who was fired from Politico for saying Trump is ‘f***ing’ his own daughter pic.twitter.com/enYAldbjS1

Julia Ioffe, cable news's biggest "It" guest since Avenatti, today on CNN: "This president, one of the things that he really launched his presidential run on is talking about Islamic radicalization. And this president has radicalized so many more people than ISIS ever did."