In trying to ‘expose’ Trump as a liar, Acosta is exposing himself as a hack… again.

A government official using the phrase ‘can confirm’ may have just rained on the whole anti-Trump parade.

Acosta may have thought he finally held top card against Trump, having caught him in a lie about the caravan.

In his own mind, he may have finally proven that our President is TWO of the things the Leftist mob has accused him of being since day one: that he’s a liar and that he’s a racist.

Sadly, it looks like Mexico’s Police and Military are unable to stop the Caravan heading to the Southern Border of the United States. Criminals and unknown Middle Easterners are mixed in. I have alerted Border Patrol and Military that this is a National Emergy. Must change laws!

…you could practically smell the triumphal glee in Acosta’s response.

After a lengthy back and forth with POTUS and VP in the Oval, they could not provide any evidence that there are terrorists in the caravan headed for the US border. To my WH pool colleagues…Video to come.

Well, Acosta is certainly playing to the three or four dozen resistance loyalists who still consider CNN a source of news and not a comedy station. 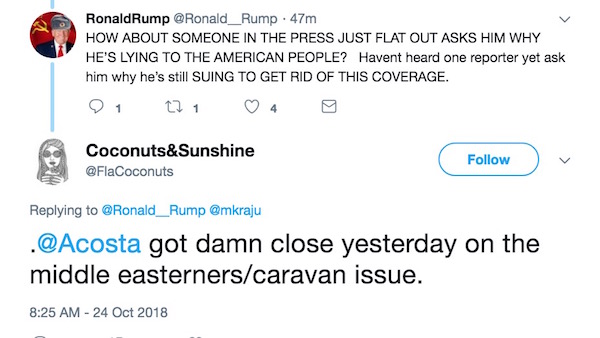 There IS more to telling a news story than merely Trolling the President in what you have mistaken for a ‘gotcha’ moment. Any real reporter would know that.

Or is that only true when there’s a Democrat administration in charge? Because here’s what their official spokesman has said about this very issue.

What if we were told that there were BOTH people with significant criminal backgrounds AND from different parts of the world, including the Middle East? Would Acosta (and the rest of the Media(D) believe him then?)

Probably not, that would require integrity and humility — both of which are in short supply among the Media(D)’s partisan hacks. But here’s the official statement anyway.

Homeland Security officials said Tuesday that among the thousands of migrants heading for the United States border are some “gang members” and people with “significant criminal histories.”

Department spokesperson Tyler Houlton said on Twitter that the caravan, 7,000 migrants strong by some estimates, includes citizens not only of Central American countries, but also of the Middle East, Africa, South Asia and “elsewhere.”

“.@DHSgov can confirm that there are individuals within the caravan who are gang members or have significant criminal histories,” another tweet read. He did not offer more specifics.
Source: FoxNews

Here’s the chain of tweets, if you’d like to see it in detail. 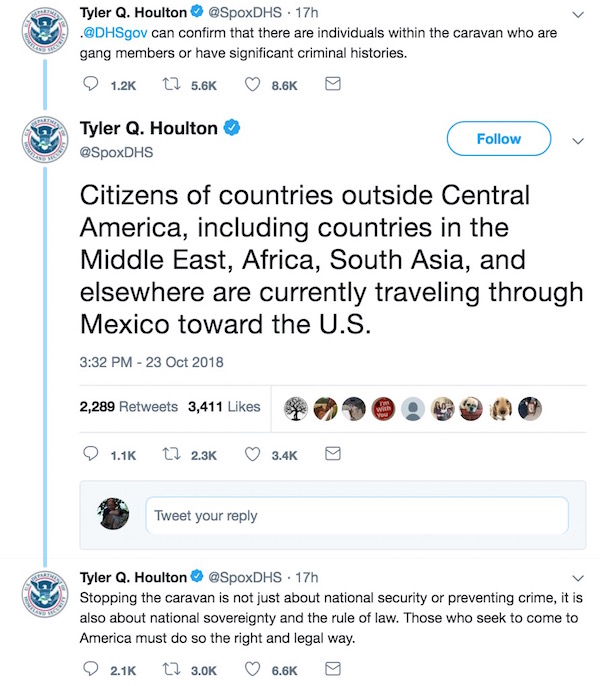 Don’t take Trump’s word for it. This is an issue in which Trump and his predecessor fundamentally agree.

I agree with President Obama 100%! pic.twitter.com/PI3aW1Zh5Q