He was already a loser before. Now he’s a laughingstock and internet-famous, too!

The 24 year-old-punk, Gregory McCalium, 23, breaks into a house with a knife at 8 in the morning.

Easy pickings, right? Even if the old guy resists, there’s a knife. What could POSSIBLY go wrong with this plan?

Narrator’s Voice: Gregory had no idea who it was that lived in the house he was robbing. 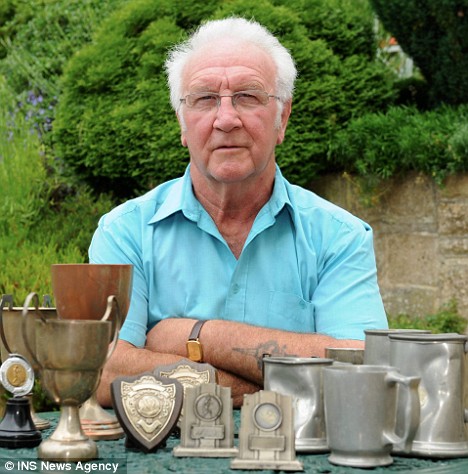 Robbing a house was obviously not the first dumb idea this loser has ever had in his life. But robbing this PARTICULAR house was an especially dumb idea.

Because 72 years old or not, the man who lived there was anything BUT ‘easy pickings’.

This *particular* man, Frank Corti happened to be ex-miliary. He had served with the Royal Engineers, and has collected himself a number of boxing trophies, as you see in the photo above.

What happened to Gregory after he forced himself inside Frank’s home is best told by a before-and-after photo: 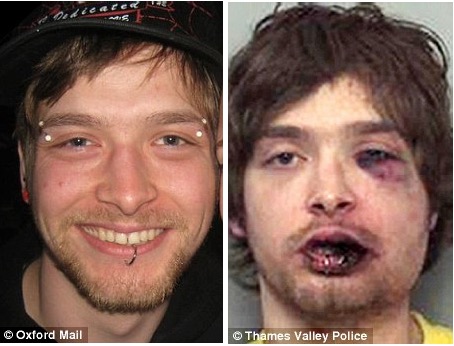 A burglar got more than he bargained for when, brandishing a six-inch knife, he forced his way into the home of a 72-year-old man.

Rather than turning and running as many would have done, pensioner Frank Corti used the boxing skills he learned in the army and felled the 23-year-old intruder “like a sack of spuds”.

McCalium, a barman, was convicted of aggravated burglary and jailed for four-and-a-half years at Oxford crown court.

Recorder Angela Morris told McCalium he “got what he deserved”. She said: “Luckily, Mr Corti was an able-bodied 72-year-old who was able to defend himself. The elderly and vulnerable people are entitled to demand the protection of courts from people like you who decide to enter a property with a weapon.”
Source: Guardian

It may have been a little more than merely a burglary. They were neighbors, and there was a noise complaing against Gregory’s loud partying well into the small hours of the morning.

Mr Corti said he called police when he found McCalium banging on the front door of his house at about 6.30am.

Two hours later, he said, he came downstairs and saw bar worker McCalium in his hallway.

Mr Corti said: ‘The accused produced a knife. It was no ordinary knife, it was more like a six-bladed knuckle duster.

‘He made a slashing movement at me. I stepped back. He missed me, fortunately.’
Source: DailyMail

The thought he leaves us all with after sentencing should make us all stop and think a little:

After sentencing, Mr Corti said: ‘I was scared when he first drew the knife but most people would have acted in the same way. If you can’t defend what’s yours, where are we at?
Source: Telegraph