A damning internal report gives bad news for anyone who really believed Google’s claims that they aren’t censoring your speech.

Was anyone REALLY surprised?

The White House recently called Google out for the censored version of their search engine that helps the Human-Rights-Abusing Chinese government continue to exert their authoritarian control of their citizens.

In remarks to a policy institute on the Trump administration’s Chinese policy, Pence said almost in passing, “Google should immediately end development of the ‘Dragonfly’ app that will strengthen Communist Party censorship and compromise the privacy of Chinese customers.”
[…]
Disclosures about Dragonfly have led to dissent among Google employees over the company pursuing a project that some believe run contrary to its stated core principles. Several Google employees have reportedly left the firm over this issue, including at least one senior worker.
[…]
Pence also condemned an array of reported human-rights violations, including the Chinese crackdown on the practice of Buddhism, imprisonment of up to a million Uyghurs (an ethnic minority that is largely Muslim), and repression against Christians across denominations.
Source: Forbes

Here’s a related headline that came up in a search: 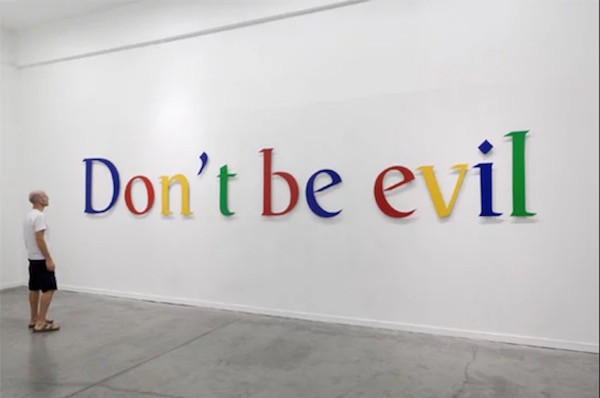 So, Google (once famous for their “don’t be evil” slogan) has basically become the digital equivalent of ‘Winston Smith’ — the lead character in 1984, whose job was rewriting history so that it fits the party narrative.

Now that internal documents have been leaked, Google’s claims about NOT being censors have been exposed for the lie they are.

“This story confirms our worst fear. Contrary to Google’s public statements and what they have said to us in private discussions, Google is in the censorship business and apparently the lying business as well. We’re going to be meeting with our coalition partners immediately and we will announce next moves very soon,” Bozell said.
Source: MRCTV

In their attitude toward freedom of expression, Google is deliberately becoming LESS American and MORE European.

For all their bluster about doing the right thing, it’s all a sham.

Nothing more. Censorship will make them more money than any committment to Free Speech will.

And thus, Freedom of Speech

The internal company briefing, titled, “The Good Censor,” told how the “utopian narrative” of the online world was being destroyed by users, governments, and even tech companies. The report partially blamed the adoption of an American concept of free speech by tech companies. “This free speech ideal was instilled in the DNA of the Silicon Valley startups that now control the majority of our online conversations,” the document stated.

Google’s analysis explained how a shift from that American free speech policy toward one that is more in line with the European tradition: promoting civility, dignity, and editing. The precise wording is that the European method is “favoring dignity over liberty and civility over freedom.” According to the document, Google wants a new role as a “editor and publisher” of the content that provides civility and dignity.
Source: NewsBusters

If you want to see the whole 85 page report, you can find it here.

Breitbart — who had the exclusive — summarized some of the key takeways.

Key points in the briefing can be found at the following page numbers:

P2 – The briefing states that “users are asking if the openness of the internet should be celebrated after all” and that “free speech has become a social, economic, and political weapon.”
P11 – The briefing identifies Breitbart News as the media publication most interested in the topic of free speech.
P12 – The briefing says the early free-speech ideals of the internet were “utopian.”
P14 – The briefing admits that Google, along with Twitter and Facebook, now “control the majority of online conversations.”
P15 – Section 230 of the Communications Decency Act is linked to Google’s position as a platform for free expression. Elsewhere in the document (p68), Google and other platforms’ move towards moderation and censorship is associated with the role of “publisher” – which would not be subject to Section 230’s legal protections.
PP19-21 – The briefing identifies several factors that allegedly eroded faith in free speech. The election of Donald Trump and alleged Russian involvement is identified as one such factor. The rise of the populist Alternative fur Deutschland (Alternative for Germany) party in Germany – which the briefing falsely smears as “alt-right” – is another.
PP26-34 – The briefing explains how “users behaving badly” undermines free speech on the internet and allows “crummy politicians to expand their influence.” The briefing bemoans that “racists, misogynists, and oppressors” are allowed a voice alongside “revolutionaries, whistleblowers, and campaigners.” It warns that users are “keener to transgress moral norms” behind the protection of anonymity.
P37 – The briefing acknowledges that China – for which Google has developed a censored search engine – has the worst track record on internet freedom.
P45 – After warning about the rise of online hate speech, the briefing approvingly cites Sarah Jeong, infamous for her hate speech against white males (Google is currently facing a lawsuit alleging it discriminates against white males, among other categories).
P45 – The briefing bemoans the fact that the internet has until recently been a level playing field, warning that “rational debate is damaged when authoritative voices and ‘have a go’ commentators receive equal weighting.”
P49 – The document accuses President Trump of spreading the “conspiracy theory” that Google autocomplete suggestions unfairly favored Hillary Clinton in 2016. (Trump’s suspicions were actually correct – independent research has shown that Google did favor Clinton in 2016).
P53 – Free speech platform Gab is identified as a major destination for users who are dissatisfied with censorship on other platforms.
P54 – After warning about “harassment” earlier in the document, the briefing approvingly describes a 27,000-strong left-wing social media campaign as a “digital flash mob” engaged in “friendly counter-commenting.”
P57 – The document juxtaposes a factoid about Russian election interference with a picture of Donald Trump.
P63 – The briefing admits that when Google, GoDaddy and CloudFlare simultaneously withdrew service from website The Daily Stormer, they were “effectively booting it off the internet,” a point also made by the Electronic Frontier Foundation and the FCC in their subsequent warnings about online censorship.
P66-68 – The briefing argues that Google, Facebook, YouTube and Twitter are caught between two incompatible positions, the “unmediated marketplace of ideas” vs. “well-ordered spaces for safety and civility.” The first is described as a product of the “American tradition” which “prioritizes free speech for democracy, not civility.” The second is described as a product of the “European tradition,” which “favors dignity over liberty and civility over freedom.” The briefing claims that all tech platforms are now moving toward the European tradition.
P70 – The briefing sums up the reasons for big tech’s “shift towards censorship,” including the need to respond to regulatory demands and “expand globally,” to “monetize content through its organization,” and to “protect advertisers from controversial content, [and] increase revenues.”
P74-76 – The briefing warns that concerns about censorship from major tech platforms have spread beyond the right-wing media into the mainstream.
Source: Breitbart