A federal judge tossed out the defamation lawsuit filed by Stephanie Clifford aka Stormy Daniels against President Trump. Clifford claimed that President Trump had ‘defamed’ her when he said that she had lied about being threatened to keep quiet about their alleged relationship.

How one can ‘defame’ a woman that willingly has sex on camera for money is beyond my comprehension.

How is Avenatti giving live interviews on two networks at the same time? pic.twitter.com/acg0kufGyC

Despite their Media (D) blitz and Avenatti’s hunger for the spotlight, it all fell flat.

U.S. District Judge S. James Otero in Los Angeles ruled that Trump’s speech was protected by the First Amendment as the kind of “rhetorical hyperbole” normally associated with politics and public discourse in the United States.” He ordered Daniels, whose given name is Stephanie Clifford, to pay Trump’s legal fees. 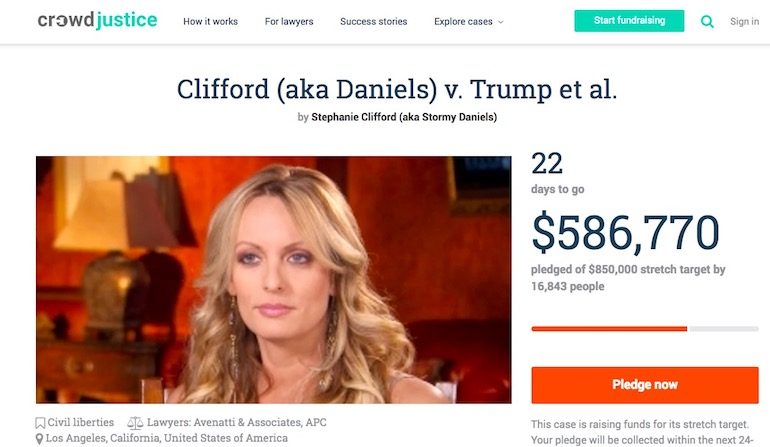 “No amount of spin or commentary by Stormy Daniels or her lawyer, Mr. Avenatti, can truthfully characterize today’s ruling in any way other than total victory for President Trump and total defeat for Stormy Daniels,” Harder said in an emailed statement.

This defamation suit is only one of several against President Trump.

And Stormy’s lawyer is already in damage control mode.

“Daniels’ other claims against Trump and Cohen proceed unaffected,” Avenatti wrote in a tweet he later appeared to have deleted.

He said in a second tweet that any fees Trump might be awarded from the defamation case would “be dwarfed by the fees he and Cohen will be required to pay in connection with the NDA case.”

Later, Avenatti tweeted that he had appealed Otero’s ruling to the U.S. Court of Appeals for the 9th Circuit.

Below is a statement just issued relating to the litigation between Stormy Daniels and Donald Trump. pic.twitter.com/nm0xl99Z86

Only #DonTheCon would watch Cohen plead guilty to multiple felonies, be on the verge of complete defeat in the NDA case, and be on the verge of having to pay big dollars to my client in fees and costs (far in excess of the order today), and still claim “total victory.” #Fraud

Good luck with that, Avenatti. This guy is so serious in his need for the spotlight that when Stormy’s news hit the sidelines during the Kavanaugh confirmation, he brought forward a woman that claimed that Justice Brett Kavanaugh and his friend ran a gang-rape ring when they were high school sophomores AND HE BELIEVED HER.

He also has political ambitions to run for President perhaps as early as 2020.

Avenatti is just so ridiculous that some conservatives have half-seriously floated the conspiracy theory that he is actually a pro-Trump operative. How could someone be such a kiss of death to the adversaries of President Trump and not be working for him? As compelling as that theory is, I just think that Avenatti is just an attention whore and kind of a bumbling dufus.

Besides, if that theory holds, then Hillary Clinton would be a pro-Trump operative and so would Elizabeth Warren.

Speaking of ‘political adversaries’ of President Donald J. Trump, Judge Otero wrote in his decision that the fact that Stormy had presented herself publicly as Trump’s political opponent, it allowed President Trump to respond to her with protected ‘political hyperbole.’

Otero, who was appointed to the court by President George W. Bush, had indicated during a late-September hearing that he was skeptical of Daniels’s claim on free-speech grounds. He said Monday that Daniels has presented herself as Trump’s “political adversary” in public and in court filings and that Trump has the right to respond to her claims.

“If this Court were to prevent Mr. Trump from engaging in this type of ‘rhetorical hyperbole’ against a political adversary, it would significantly hamper the office of the President,” Otero wrote.

“Any strongly-worded response by a president to another politician or public figure could constitute an action for defamation. This would deprive this country of the ‘discourse’ common to the political process,” he wrote.
Source: Washington Post

Let’s all say buh-bye to Stormy and her attention whore lawyer, Michael Avenatti, and let’s do it in honor of the other big newsmaker of the day, Sen. Elizabeth ‘Fauxcahontas’ Warren, whose career is now looking just as promising as those two: