These Resist clowns are becoming so scripted and boring they’re practically interchangeable.

…have you heard this quote?

You’ve heard some variation of it, to be sure. 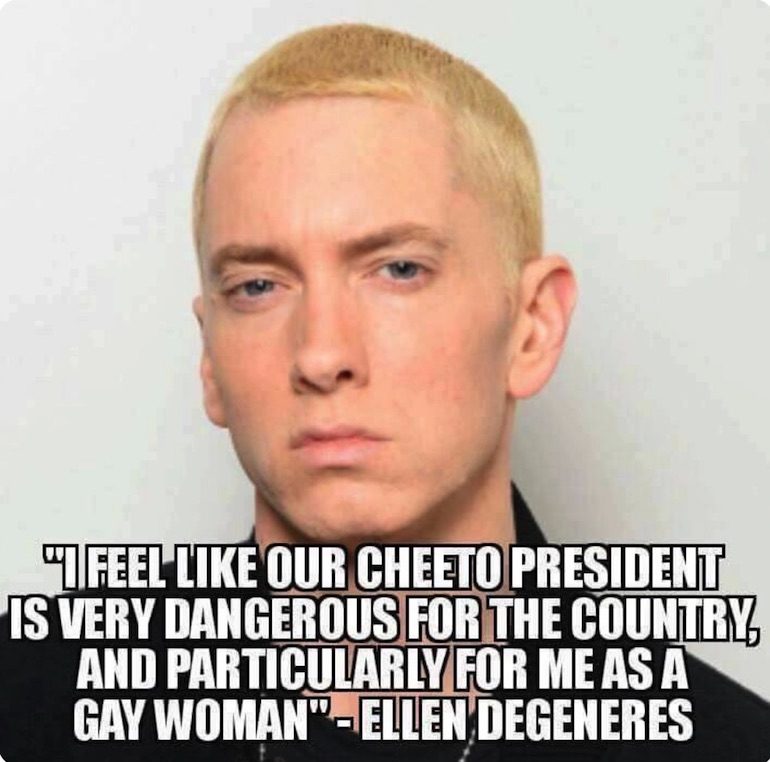 That may not be an EXACT quote. They do all begin to blur together.

That’s more or less a quote from Ellen whats-her-face.

“I just, you know, he is who he is and he has enough attention and he has his Twitter account and he has ways to get his message across. There’s nothing that I am going to say to him that is going to change him and I don’t want to give him a platform because it just validates him. And for me to have someone on the show, I really, I have to at least admire them in some way and I can’t have someone who I feel is not only dangerous for the country and for me personally as a gay woman but to the world. He’s dividing all of us and I think I don’t want him on the show,” DeGeneres said again to massive applause.
Source: RCP

The Cheetos reference came from some “other” gormless hater.

You may remember a certain aging rapper from 8-Mile.

Even the LEFT mocked Eminem’s attempt to slap down Trump. Daily Beast, the same scumbags who were first to publish ‘the Dossier’ had no use for Eminem.

As far as we can tell, “Campaign Speech” is a diss track against the misogynistic, homophobic Trump, as well as the haters who malign Eminem for being a misogynistic homophobe. If you needed another reason to give up on 2016, it appears that we have officially entered the year of white rappers putting out sincere, extended political statements (#WhitePrivilege).
Source: DailyBeast

Peter Thiel, for one, doesn’t seem very “frightened” by Trump.

Is the President “mean” to anybody from the LGBT crowd?

Well, there’s Rosie but that isn’t because she’s a lesbian, it’s because she’s a horrible specimen of humanity more generally. Don’t take our word for it, ask her own daughter.

If anything, he’s left the issue of sexuality to the side, while focussing on things he’s deemed more important.

Important things like tax cuts/reform, reducing regulations, appointing judges, breaking the media’s stranglehold in information. (Have you seen what happened to CNN’s ratings and credibility since he took office?)

If you remember, he didn’t even really care which bathroom Bruce/Caitlyn Jenner would have used in Trump Tower.

Simply put, Ellen’s not as important as she thinks she is. The President’s got bigger fish to fry.