Hey guys, have you ever dated someone who ‘seemed’ nice, until …? Yeah, it’s like that.

It’s a free platform, they said.

Everyone’s doing it, they said.

– Don’t call some punk-ass kid who starts a riot or beats the hell out of his girlfriend a ‘thug’, that might be seen as racist.

– Don’t say that XX and XY chromosomes have some scientific connection to gender. 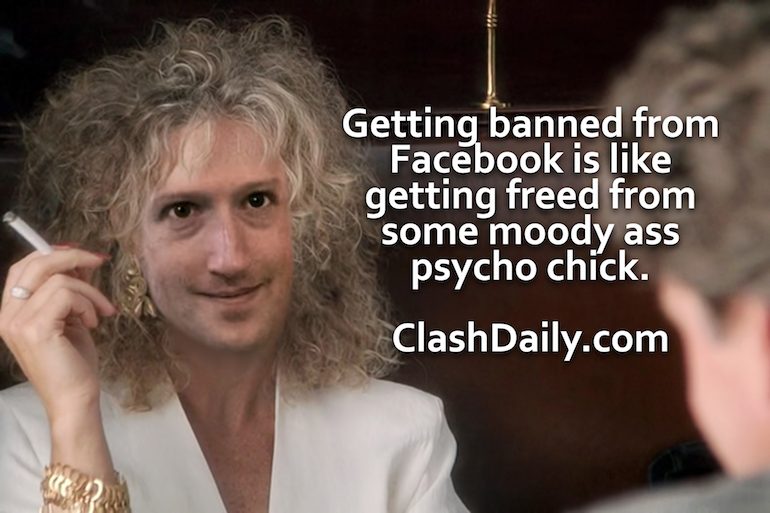 Think you can identify the chick in the picture? Scroll down for the poll to answer.

What’s the next her majesty expects us to follow?

Don’t hang with the boys?

Don’t have any conversations with a girl that isn’t her?

She gets to inspect your phone anytime she wants?

Zuckerberg is looking an awful lot like that chick who gave her boy ‘the list of rules‘ that would make any sane friend shout ‘Run Forrest Run!’

She thinks she’s punishing her boyfriend by breaking up with him. Joke’s on her, it’s more like an early prisoner release program.

Only when breathing the free air again did he have a reference point for how stifling it had become.

Zuckerberg ‘punished’ Conservatives for being — well — Conservatives. He hoped to silence us. He had everyone running through all kind of BS hoops, or else that coveted traffic would dry up.

He’s done his worst, and you know what?

Many of us will be just fine.

In fact — we’re now free to tell that digital gelding exactly what we think of him and the detailed Media-Matters master plan to influence the election by silencing any Conservative Presence in the digital media.

Speaking of ‘adapting’ we’ve got MeWe and our mailing list, so you won’t have to be dependent on the whims of current digital overlords control of your newsfeeds. Conservative content can go straight to your inbox and you can access it on YOUR terms, when and how YOU want.

And MeWe is the alternative social media platform gaining popularity because it’s NOT hellbent on micromanaging content the way certain Billionaire digital Castratti have been.

Who do you see in this picture?