What pithy nicknames did the Media(D) come up with when the attacks were targeting Republicans?

Did we see ‘Bernie Bro Bloodbath’ when Scalise (and other Republicans) were targeted for an assassination over Health Care by someone who was actually KNOWN to have worked for the Bernie Sanders campaign?

What about the “Racist Rampage” when an avowed racist killed the very police who were providing protection and escort for a BLM march?

Or when Planned Parenthood sympathizers threatened Republican Senators? Or the recent Ricin scares, or various other foiled attempts of violence against the political right?

No, we didn’t. And that was when facts about the perpetrator were already known to the public.

Here, the only answers we have for ‘whodunit’ come from rank speculation.

It’s possible some whackjob is behind this.

It’s possible someone with an ax to grind against the Democrats, and wants to hurt or scare them is behind this.

It’s possible someone who wants to shift the narrative from Democrats as the villains of mob action, into the victims of violence is behind this.

It’s even possible that the real explanation is none of these.

As we recall, there were assumptions made against who was responsible for threats against Jewish Community Centers, and it wasn’t who people thought.

But none of that stopped the hashtag of #MAGABomber from trending on Twitter. (This is the same Twitter which mysteriously didn’t have Kavanaugh trending on the day he joined the Supreme Court.)

Daily Mail’s headline was as follows. 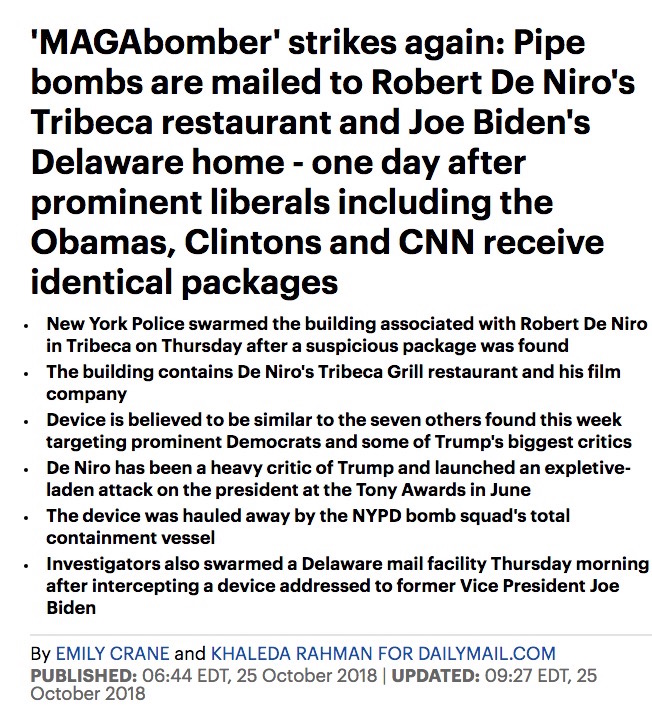 That’s a HEADLINE, mind you. Such is the state of modern ‘journalism’. Isn’t it just so helpful that Facebook and Google are so vigilantly guarding all of us from ‘fake news’ sources?

Was NOTHING learned in the Kavanaugh deliberations about rushing to judgment about someone’s guilt?

This trend isn’t new, either. We all remember how people talked about the Tea Party movement, don’t we?

Here’s an old op-ed headline that made it past the editor’s desk on “respectable” news site, Politico: The tea party’s terrorist tactics

They’re not even bothering with the usual journalistic practice of hiding it behind the words ‘alleged’.