The critics who think Mitchell held back too much while questioning Ford might rethink things after reading her report.

In the hearing, she asked a series of questions.

Since then, she’s evaluated Ford’s answers. Like so many other things, in life ‘the devil is in the details’.

If you missed it, you can watch Rachel Mitchell’s complete questioning of Professor Christine Blasey Ford without the interruptions here:

One of the more explosive takeaways is here, along with ‘clickable’ copies of her testamony.

Rachel Mitchell, prosecutor hired by Judiciary Committee Republicans writes 5-page memo sent to all GOP senators on Ford testimony tonight. “I do not think that a reasonable prosecutor would bring this case based on the evidence before the Committee.” pic.twitter.com/h9eCcWPRwH

Here is the report itself. 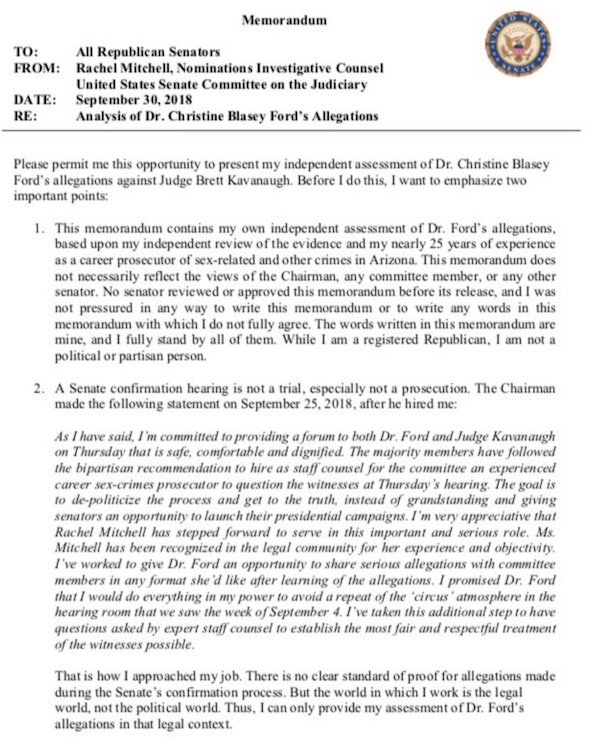 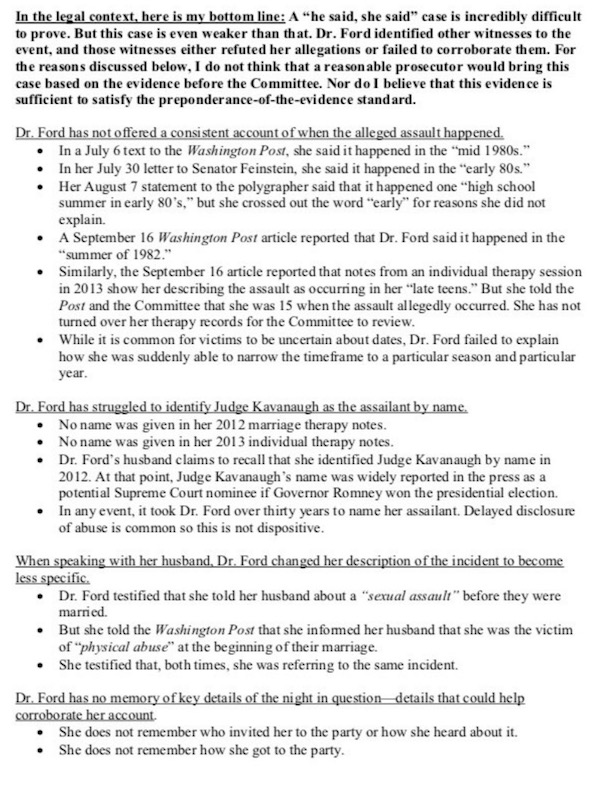 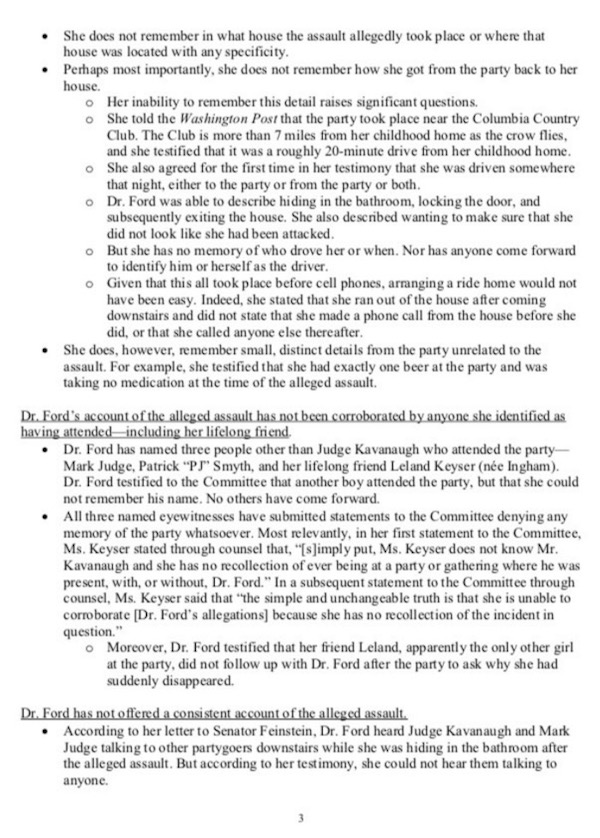 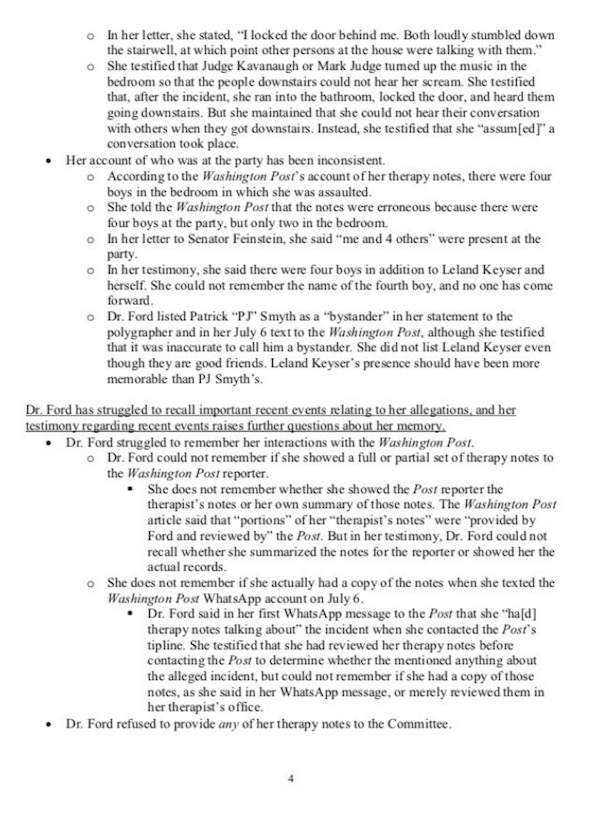 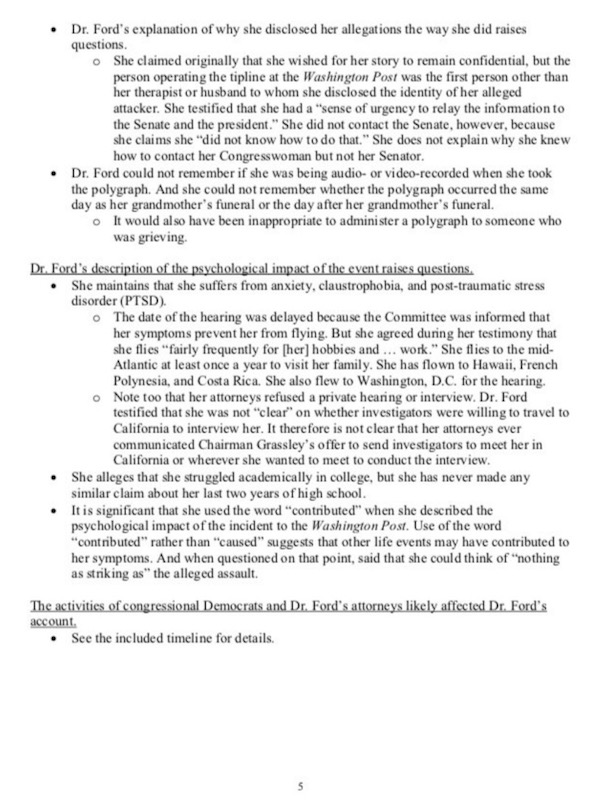 “A ‘he said, she said’ case is incredibly difficult to prove,” Mitchell states. “But this case is even weaker than that. Dr. Ford identified other witnesses to the event, and those witnesses either refuted her allegations or failed to corroborate them. For the reasons discussed below, I do not think that a reasonable prosecutor would bring this case based on the evidence before the Committee. Nor do I believe that this evidence is sufficient to satisfy the preponderance-of-the-evidence standard.”

Here are some key takeaways she provided: 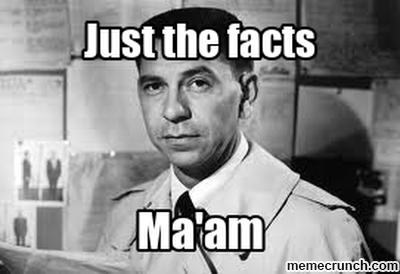 Although Mitchell is registered with a political party (Republican), she is not political in any activist sense, nor was her role in these proceedings to be treated as political. If anything, her role was to remove the politics from the conversation and get down to the actual facts.

[We note that this was not an approach taken by others.]

When Did This Happen?

In a July 6 text to the Washington Post, she said it happened in the “mid 1980s.”
In her July 30 letter to Senator Feinstein, she said it happened in the “early 80s.”
Her August 7 statement to the polygrapher said that it happened one “high school summer in early 80’s,” but she crossed out the word “early” for reasons she did not explain.
A September 16 Washington Post article reported that Dr. Ford said it happened in the “summer of 1982.”
Similarly, the September 16 article reported that notes from an individual therapy session in 2013 show her describing the assault as occurring in her “late teens.” But she told the Post and the Committee that she was 15 when the assault allegedly occurred. She has not turned over her therapy records for the Committee to review.
While it is common for victims to be uncertain about dates, Dr. Ford failed to explain how she was suddenly able to narrow the timeframe to a particular season and particular year

The name never came up until very late in the game.

Therapy notes in 2012 and 2013 didn’t include the specific name of the accused.

Husband claims she identified Kavanaugh by name by 2012 when he was already being considered for the Supreme Court. Either way, at least 30 years elapsed before she named her attacker.

How she described it to her husband.

She described it to her husband as a physical assault one time and a sexual assault another time.

The absence of any key details relating to the night in question, including where it was, how she arrived/left, who invited her, and yet she remembers certain other minute details ‘one beer’ and ‘no medication’.

Because the date and location are unspecified, nobody else is able to provide witnesses. Even with this evidentiary advantage, those she herself claimed were present either did not corroborate her story our outright contradicted it.

[s]imply put, Ms. Keyser does not know Mr. Kavanaugh and she has no recollection of ever being at a party or gathering where he was present, with, or without, Dr. Ford.” In a subsequent statement to the Committee through counsel, Ms. Keyser said that “the simple and unchangeable truth is that she is unable to corroborate [Dr. Ford’s allegations] because she has no recollection of the incident in question.”

Also of note was the fact that no friend followed up to inquire of her abrupt absence from the party in question.

What could (and couldn’t) be heard.

Whether or not PJ was a bystander.

This isn’t a complete list (which is why we’ve included her report itself).

The other factors include Interactions with Press and Senators, psychology,