The demanding list of rules that a girlfriend gave to her boyfriend has made it onto social media, and it’s unreal.

The 22 ‘rules’ an unidentified woman gave to her boyfriend was found in a car that he traded in and unwittingly left the inside the car.

The list includes all sorts of demands that include that he is not permitted to interact with single women, not hang around with his friends, and must respond to her texts within 10 minutes.

And so much more… 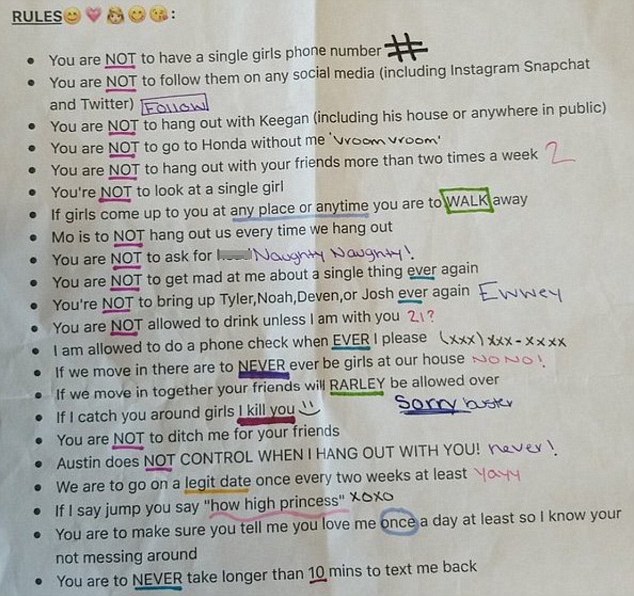 This is why when I was in high school, most of my closest friends were male. I can’t handle the drama, and I teach drama.

Let’s hope that guy was able to escape the obvious abuse.

Although the post was now deleted, according to Planned Parenting many people shared their opinion.

Even though some people thought the list was amusing, many commented on how dangerous it was.

I'd find another girlfriend, this one needs help! https://t.co/e0qu86GYVj #FoxNews

This is insecurity at it’s worst! https://t.co/5VpzvPa2l2

Just in case y’all think all women/girls are cute & cuddly, this is the kind of crazy our society is producing. I’m willing to bet this girl was raised without a positive male influence in her life. OR her boyfriend is a cheater that got busted. https://t.co/swA0jj7ych

This is really something sad. It also shows you just how bad it can be–this is a control freak and GOD yes, run, run as fast as you can as far away as possible from this girl and any like her#FoxNews https://t.co/JqVMUo046U

He has to be a first class wanker to agree to this!https://t.co/vWhovOnTho

‘This isn’t cute or sweet or just for anyone’s own good, this is controlling,’ one said.

‘Wow….. he should run from that girl,’ added another.

‘A lot of domestic violence situations start with a list like this,’ said a third.
Source: Daily Mail

Are women more difficult to be in a relationship with?

We’ve seen how nutty the feminist left can be.