CNN is quick to condemn tweets by President Trump and those around him. Will these tweets by their own on-screen darling give them pause?

Now that the pearl-clutching neo-Puritan left has determined that high school yearbook comments and raucous teenage behavior are on the table during ‘job interviews’ perhaps the young pups commenting over at CNN should be concerned about their Twitter feeds.

After all, social media is vicious when policing ‘hate’ on the right but maybe it’s time to look at what’s going on on the left.

Kaitlan Collins, who appears to now suffer from a little-known condition called RBF (Resting Bitch Face) has had some of her old tweets come back to haunt her.

You remember Collins, don’t you? She was the CNN reporter that the Media (D) used as a martyr on the ‘unprecedented’ attack on journalistic freedom by the ‘totalitarian’ President Trump when the White House refused to allow her access to a Rose Garden event. Collins was shouting out questions to President Trump about the Michael Cohen tapes and Stormy Daniels at a press event with Jean-Claude Juncker, President of the European Commission. Of course, the Media (D) ignored when even worse stunts were pulled by President Obama, including wiretapping the Associated Press and spying on Fox journalist, James Rosen.

I’d feel more sympathy for Collins if she wasn’t posing as a hyper-partisan commentator who is posing as an objective journalist. With ‘reporters’ like Collins, April Ryan, and Jim Acosta, it’s a wonder why the right feels as though CNN might be just a wee bit biased.

CNN’s Brian Stelter, the host of the most inappropriately named ‘news’ show on television, ‘Reliable Sources,’ thinks that Kaitlan’s commentary is top-notch.

? @KaitlanCollins is on point here about the "Trump's greatest week" narrative pic.twitter.com/OE8GXucgoj

But will Stelter walk it back now that Collins has been found to have posted several homophobic tweets?

A pro-gay Republican group, Log Cabin Republicans, has called out CNN for some old tweets by Collins. 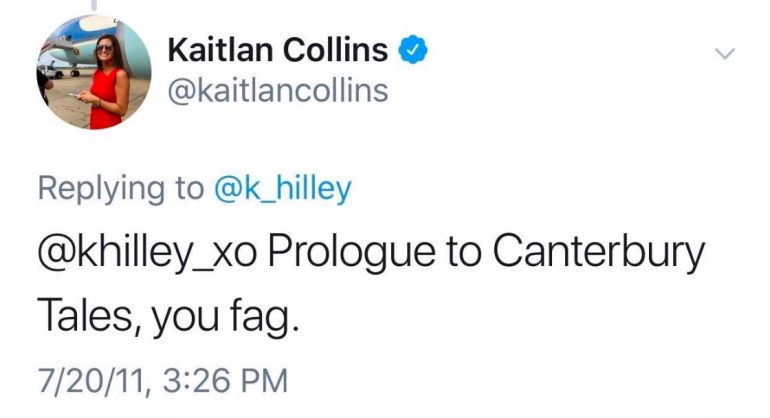 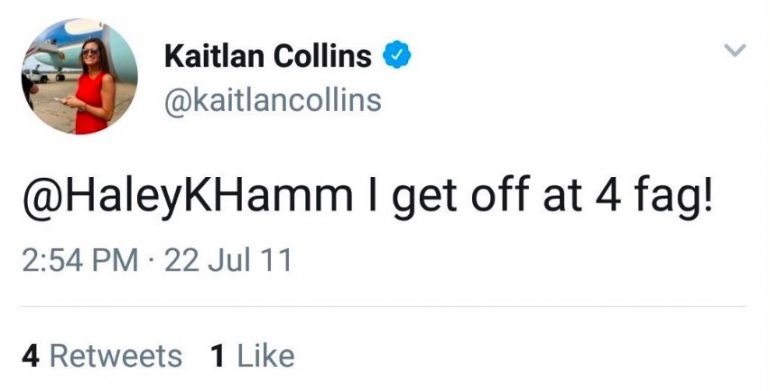 Well, that’s awkward. And that wasn’t even a decade ago, not 3 and a half decades. If questioning what Kavanaugh and his friends meant by ‘boofing’ is a thing, so is the flippant use of a gay slur in 2011.

How about something a little more recent? 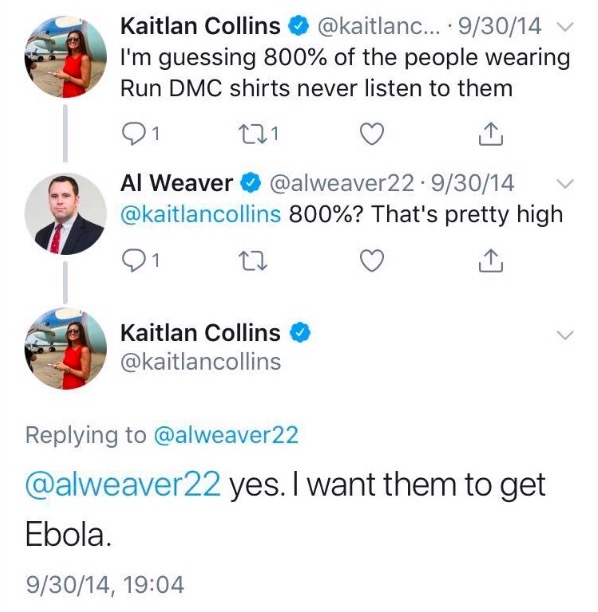 Collins used to work at the Daily Caller in their ‘Entertainment’ section.

Also, you wrote sideboob slideshows at the DC for seemingly ever, so what's news vs. not news is something you should sit out https://t.co/HPjPJHFFe6

CNN hired @KaitlanCollins to be their White House "reporter" knowing that she wrote degrading articles about women's appearances.

I don't want to hear another word from CNN about Trump's comments when they hire someone that wrote this:https://t.co/2BMJqWc48r

She appeared on Tucker Carlson’s show when she was still working with the Daily Caller as an apparent ‘conservative’ and her RBF wasn’t as severe. She unironically says here that the President’s criticism shouldn’t affect the Media (D)’s reporting:

Aaaaand then she joined CNN and *poof!* her conservatism went out the window.

But the ‘fake journalist’ rails against the label ‘fake news.’ 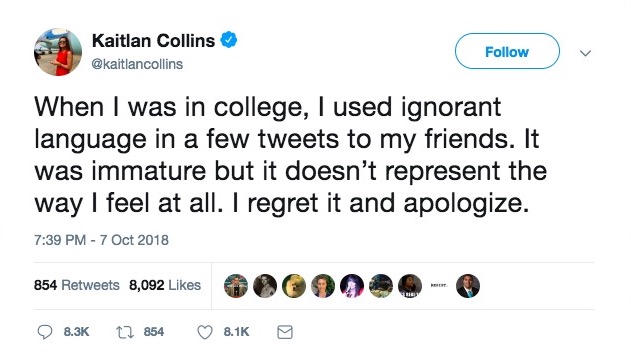 Yeah, you know what? That’s not gonna work anymore.

We have to see your Yearbook before we can except your apology. #WalkAway

– It happened a long time ago: So what https://t.co/EnubFphoxy

Welp, ‘journalists’ — you made the standard and we don’t like it, but we’ll hold you to it.

Sorry. If we don't hold journos to same standards they demand in others, they won't stop. It's all stupid but you guys legitimized it. So live with it. https://t.co/0EOsO8wBJo

Brett Kavanaugh used “ignorant language”, by your definition, but you and the rest of CNN “commentators” (and Democrat Senators) still tried to destroy his life. https://t.co/0Nm48Yoffl

Next time this "reporter" tries to ask you a question during a press conference, you should call on her and reference her as: "Yes, you, the CNN reporter who got in trouble for making homophobic comments." https://t.co/luLO0oXyNO

Of course, she could try to take the road that MSNBC’s Joy Reid did and claim that it’s a case of mistaken identity… but I don’t think that Collins ticks enough of the identity politics boxes to make that work.