The people who were pissed at Kanye are cheering this. The two scenarios are different in one key way.

Taylor Swift is the Left’s Newest Celebrity to carry their Democrat banner. (They’re even willing to overlook the fact that the Democrat she’s supporting is pro-Kavanaugh.)

The oft-jilted Country star has stood up to in support of the political left.

You wonder whether former fans on the right will start playing one of her many breakup songs of ironically: “We Are Never Ever Getting Back Together”

Let’s be honest. She hasn’t been particularly political until now. She saw how the wolves came out to destroy a CANADIAN Country Singer (Shania Twain) when she said she probably would have voted for Trump in answer to some dumbass reporter putting the hypothetical question to her.

She tried to stay out of the fray, rather than alienate audience.

‘I’m not going to sit here and go into my political views,’ she said a few years ago, ‘because that’s not what I choose to do. I choose to do music.’

She was right then, and she would be right now.

But such a refreshing attitude from an entertainer is now deemed unacceptable.

Ever since Donald Trump was elected President, Taylor has been roundly abused by vicious trolls on social media for NOT attacking him in public.

She was branded a coward and a traitor, and a dog whistler for white supremacists.

Even mainstream media piled on her, condemning her for her silence.
[…]
There was something laudable and valiant about a major star declining to join the rush to join the self-styled ‘rage resistance’.

She even ‘liked’ a Tumblr meme of herself onstage, kickboxing a shadowy male figure with the word ‘REPUBLICANS’ written across his jacket.

Nothing could possibly please today’s illiberal hate-filled liberals better than violent imagery like that.

Sure enough, all the same people who hated her before for her political silence have now raced to cheer her from the rooftops.

With the Kavanaugh hearings dominating the news cycle, and midterm elections on the horizon she decided now was the time to weigh in. 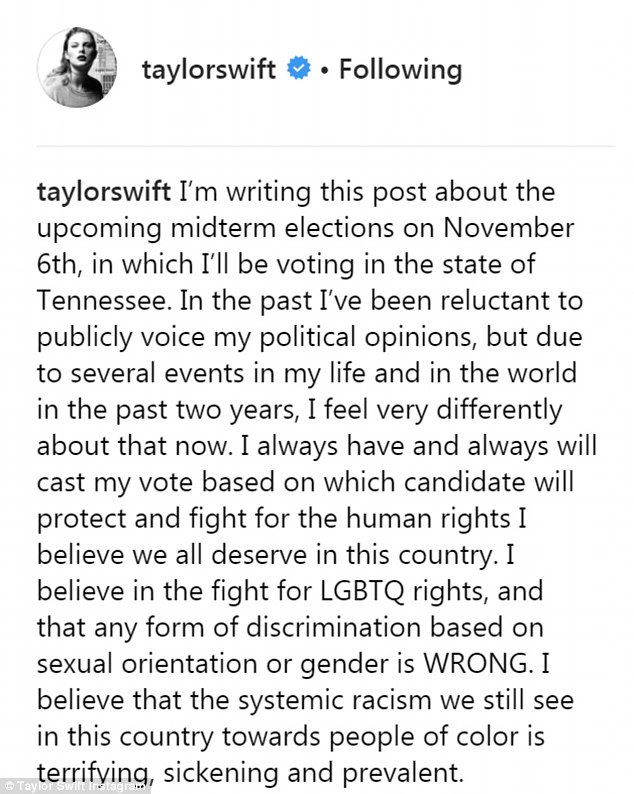 Hard to say what she’s so worked up about. Trump has hardly said “boo” about LBGT issues one way or another. He’s had no problem hiring qualified people like Thiel when they fit the positons he needs filling. But besides that, he’s neither lighting up the White House with rainbow colors, nor is he actively seeking to bankrupt cake bakers, or drag homosexuals away in chains. If you remember, when it came up, Trump didn’t “give AF” which bathroom Jenner used in Trump Tower.

Swift, it seems, thinks that bakers should be obligated to work for whoever hires them, no matter what their private views, particularly relating to sex. Forget that the now-famous cake bakers were happy to do conventional business with any and all customers — including gay men — but had a list of custom work they would not do. That list included profanity, causes to which he would object (KKK for example), pro-divorce, halloween, sexually explicit content, and homosexual weddings.

It was custom work, and he would choose which work he would and would not accept. Swift isn’t cool with that.

This must mean that Swift will be willing to work a private event for Log Cabin Republicans. She cannot reserve the right to refuse service on basis of beliefs.

Let’s go one further. If NAMBLA booked her for a private event, she would — by her standards — be obligated to perform there, whatever her private objections may be.

It’s time for Taylor to diversify her information diet. It’s embarrassing, really, how wrong she’s got it. Maybe she could listen to Candace Owens, or Kanye to straighten her out on some critical facts.

And that brings us back to Kanye.

If you had told me two years ago Kanye would be running around in a MAGA hat while Taylor Swift was endorsing democratic candidates, I would have smacked you to the ground and stolen your wallet for wasting my time.

Here’s the typical response of the left half of the internet. 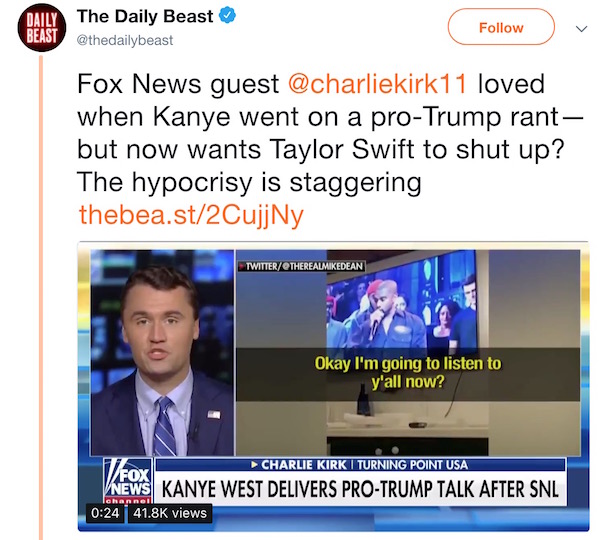 Is there a problem with that? Yeah. The left had nothing but F-bombs for Kanye when he said something very simple politically…

… even if you’re black, you are free to vote for whoever the hell you want, Democrat, Republican, or otherwise.

Real earth-shaking stuff. He was reacting to the outrage when he stood up for Candace Owens getting kicked around as a young Black woman who dared to think for herself.

Kanye was telling the world, essentially, vote your conscience. But be smart about your information choices. If the music and media you consume skews 90% liberal, don’t let that dominate your view of reality and the world around you. Think for yourself.

Taylor Swift? What was her grand contribution to the debate?

She regurgitated Hillary’s old talking points. The only thing missing was calling the right a ‘basket of deplorables’.

Swift is telling Americans HOW to think.

It would require a Leftist to confuse the two.

The media tried to do our thinking for us in 2016. How well did that work out for everyone?