But we shouldn’t worry. there will be “no” anti-conservative bias in any of their algorithms or ad revenue models. Right?

In 2015, Google dropped that ‘don’t be evil’ slogan. You can see how things have been going since then. In the latest partisan blast by the ‘ever-so-non-partisan’ Google, we have a pledge by a Google exec to destroy the GOP. This is the same Google that has it’s collective nose wedged firmly between totalitarian China’s political butt-cheeks.

You need political censorship? Yessir. We can do that.

That same Google, with a history of demonetizing even the most harmless videos (Prager U, for instance) for ‘violations’. Some big Tech companies have been subject to complaints about blocking legitimate candidate campaign ads. (Republican, naturally.) Sounds like something the FEC may take in interest in.

After Kavanaugh weathered a series of attacks against his character and was confirmed, a Google exec sent this blast over social media. Here’s a screen shot: 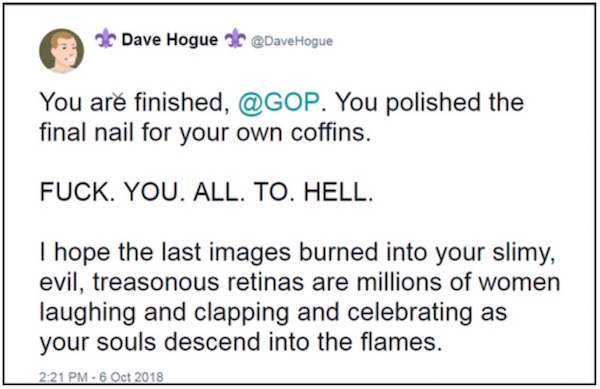 “You are finished, @GOP. You polished the final nail for your own coffins,” Google’s UX design lead David Hogue said Saturday in a now-deleted tweet. “FUCK. YOU. ALL. TO. HELL.”

“I hope the last images burned into your slimy, evil, treasonous retinas are millions of women laughing and clapping and celebrating as your souls descend into the flames,” he added,

Here’s him walking it back.

Sorry, I’m not buying it.

Protect the brand, and all that.

People with THESE attitudes toward half of the American public, who have already shown they have no corporate committment to free speech (see: China), and who use arcane and undetectable methods to drive most of our interactions on social media — including, among other things, differentiating between ‘real’ and ‘fake’ news. (By whose definition?)

“What employees say in their personal capacity has no bearing on the way we build or operate our products,” a Google spokeswoman said, per Fox News.

We’ve all seen that video of everyone at Google boo-hooing after Hillary’s 2016 loss, right?

Are you buying that this personal belief (which has been shown to be culturally systemic) has no impact on the behind-the-curtain decisions going into Google’s software?

This is the company that not only fired James Damore for having the ‘wrong’ opinion about women in high-tech, but they financially rewarded staff members who spoke out about him.

With this as their corporate culture, do you REALLY believe that their personal biases have ZERO impact on their work product, which includes choosing which of the digital world is even visible to our searches?