Get ready for the left to start talking about Beto’s ‘moral victory’ over Ted Cruz. That’s what they said when Jon Ossoff lost in Georgia and Danny O’Connor lost in Ohio.

You know when they start talking about a ‘moral victory’ they’re absolutely sunk. Especially if they do it before the election.

That great, skateboarding hope, Beto O’Rourke is behind in the polls, and Cruz is starting to pull ahead as Election Day gets closer and closer.

The RNC even made a fantastic advertisement about the ‘moral victory’ myth.

Leftists have shoveled money at O’Rourke to the tune of 38 million dollars, despite the estimated million vote edge that Cruz has over his opponent. And Beto says that he’s not going to share that with his fellow Democrats.

I’m sure they don’t mind the anti-socialist sentiment from Beto, after all, he’s their Great Left Hope. Besides that, he’s a cool, hep cat, Daddy-O!

Just check out how he relates to the Young Uns:

.@BetoORourke skateboards onto stage at his Corpus Christi stop. pic.twitter.com/7sydBZyzWP

And he livestreams himself playing the air drums while at the Whataburger drive-thru. 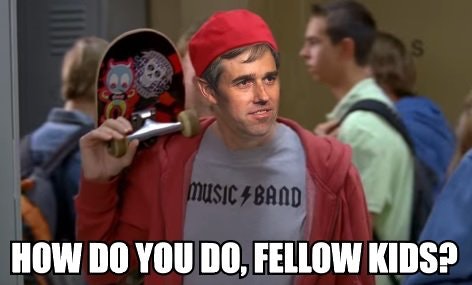 But then, despite his rad skateboarding skillz, he still has to face Senator Ted Cruz in a debate setting.

In skateboard terms, Beto is failing at doing an Ollie and Cruz crushes him with a 720 Gazelle Flip.

The topic that Cruz wiped the floor with Beto over was immigration. Senator Cruz revealed just how extreme Beto O’Rourke was on immigration in comparison to the average Texan.

CRUZ: Congressman O’Rourke not only opposes a wall, but he has said we have too many fences and walls already on the border, he wants to tear down the ones we have. And I’ll note, he brought up El Paso. El Paso is right across from Juárez, one of the most dangerous cities in the world — three thousand murders last year. There’s a wall there. That wall is one of the tools you use to protect us. But let me just give you an example of just how extreme Congressman O’Rourke is on immigration. Kate’s Law, commonsense legislation, [the] overwhelming majority of Texans support it. I’m the author of Kate’s Law in the Senate that says violent, criminal, illegal aliens, if they’re deported repeatedly should face a mandatory minimum prison sentence. Congressman O’Rourke voted against Kate’s Law. That’s wrong. We should not be releasing violent criminals into our community.

.@TedCruz says @BetoORourke is “extreme” on immigration. He says no race in the nation is "with a starker divide" on immigration than this one