Do Dems care about professor Ford, or did they just weaponize her pain in the service of their political power-grab?

The Democrats, for all their claims to be the great defender of victims, went “to battle” in these Kavanaugh hearings with Ford serving as a placeholder for all victimized women everywhere.

They made her the “face of the movement” — against her will.

And without her consent.

She had asked that her privacy be respected. It wasn’t.

She was (apparently) told she wouldn’t have to testify in public — she did.

She sounded surprised — SURPRISED! — when it came up that Senators were willing to have people meet her, privately, anywhere in the world. Even though the rest of the world already knew about that offer.

And now that Kavanaugh is an Associate Justice in the Supreme Court, Democrats are already gearing up in efforts to have him impeached. Being the real winners that they are:

They’re really interested in the emotional well-being of Professor Ford. You can tell: 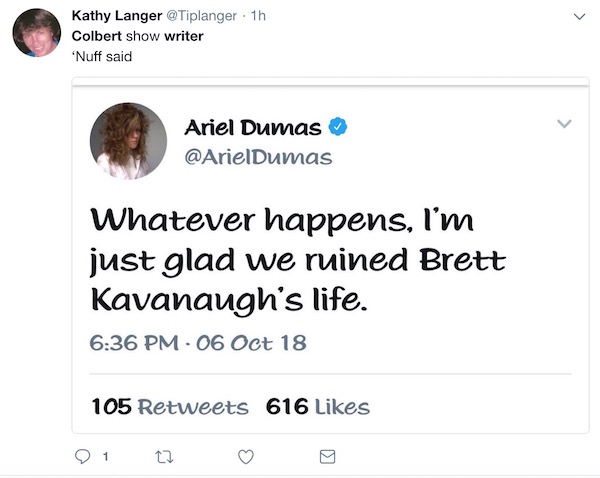 Ms. Dumbass has since switched her Twitter account to ‘protected’. Such is the courage behind her convictions.

She wants to get on with her life:

With a Senate confirmation of Supreme Court nominee Brett Kavanaugh all but guaranteed, Christine Blasey Ford has no further plans to pursue her sexual misconduct allegations against Kavanaugh.

When asked about the possibility of impeachment proceedings, attorney Deborah Katz told CNN: “Professor Ford has not asked for anything of the sort. What she did was to come forward and testify before the Senate Judiciary Committee and agree to cooperate with any investigation by the FBI, and that’s what she sought to do here.”

“She does not want him to be impeached?” CNN’s Dana Bash later asked.

Ford’s attorney Lisa Banks added that Ford feels she did the right thing by testifying and has no regrets.
Source: Legal Insurrection

The Dems have a choice between letting her quietly return to her life, or re-victimizing her by turning her into a political prop for their naked power grab.

Which will they choose?

Was there any doubt?