Andrew Gillum held a ‘rally’ featuring that wacky Democratic Socialist Bernie Sanders. Well, it was supposed to be a rally…

Unfortunately, hardly anyone showed up.

With all the reports of how Gillum is doing in the polls, you’d think there would have been a little more excitement.

Of course, he’s hit a little snag in the campaign like an active FBI investigation of possible corruption, which included accepting pricey tickets to the musical, Hamilton from an undercover FBI agent… or maybe that’s two snags if you count this video of his seemingly anti-white office staff talking about how they’re working to dupe the voters.

Fox News is reporting Gillum’s latest financial ‘snafu’ in which he appears that he used taxpayer funds for private travel on a developer’s plane to attend a meet and greet with donors.

Gillum, rife with controversy, and playing the race card against his opponent, chose to bring in the Big Guns — (not an actual gun obviously, since he’s not so keen on the Second Amendment) Democratic Socialist, Bernie Sanders.

And, well, hardly anyone showed up.

It was nearly as bad as the disastrous Tim Kaine rallies during the 2016 election.

BREAKING: #TimKaine rally only about 30 people show up. Her campaign is dead in #Florida nobody wants #HillaryClinton Serial Liar Corrupt pic.twitter.com/vgnWGHxXgs

Seriously, though check out this ‘crowd’:

A rally in support of Mayor Andrew Gillum should start shortly. Bernie Sanders will be the main speaker.#wtsp pic.twitter.com/aLxC8qRHks

Here’s the massive gathering while Bernie is speaking:

Bernie Sanders Rally for Andrew Gillum today. Almost no one was there.
This is the Blue Wave power??? pic.twitter.com/1drlDZUjmY

Sorry, Bernie — did you ask if those nines of people were ready to ‘make American history’ or ‘make America history’? ‘Cause that could go either way. (It’s not even enough to call it ‘tens’ of people.)

But I’m sure that the Media (D) corrected what you see with your own lying eyes.

The crowds were massive, big, huge! You’ve never seen crowds like this before!

For comparison, take a look at the crowd that this leftwing Media (D) genius filmed while crowing about the ’empty’ seats at the recent rally in Houston:

So, there are actually a lot of empty seats at #TrumpRally tonight. pic.twitter.com/6XPfsKInxR

Yeah, those are box seats, and probably weren’t open to the public, you ninny.

Here is the crowd in Houston camping out the night before the Trump rally:

Of course, the Media (D) would be sure to pan the largish crowds at Obama’s events, but not so much with President Trump.

As a matter of fact, when Barry was  campaigning in Nevada recently, they made sure to make it look like the crowd was huge.

However, here’s the reality:

Then again, are you surprised?

The Media (D) reports the ‘news’ using a single script:

Are you buying the ‘Blue Wave’ prediction?

I’m beginning to think it’s as likely as ‘Madame President’ was in 2016. 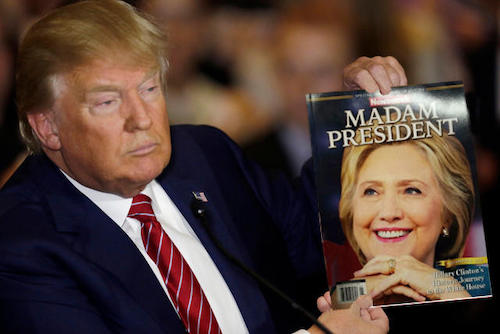