So far as we know, “Charlie” had no previous grudge against his owner.

As freak accidents go, this one is a doozy.

A guy — Sonny Gilligan, 74 — was on his way back from a hunting trip in New Mexico with his dogs.

The truck is parked, the shotgun is in the back. And so is his dog, Charlie.

Somehow, Charlie managed to jam his paw on the trigger, discharging the shotgun.

That would be a crazy enough coincidence by itself, but it got far worse than that.

Gilligan, 74, a Doña Ana County resident, said that Charlie and his two other dogs — Scooter and Cowboy — went with him to hunt for jackrabbits in the desert west of Las Cruces on Thursday, Oct. 25.

Gilligan was in the driver’s seat of his parked pickup truck, along with the dogs, when he was shot.

“Charlie got his foot in the trigger of the gun and I leaned forward and he slipped off the seat and caught the trigger — and it shot,” Gilligan said. “It was a freak accident but it’s true, that’s what happened.”
Source: ElpasoTimes

The story may be funny, but his injuries were entirely serious.

The shotgun — in the backseat of the pickup, along with Charlie — fired through Gilligan’s front driver’s seat. The bullet went through Gilligan’s back, breaking a few ribs and shattering his collar bone, and caused other, severe injuries.

Gilligan said he initially thought someone from outside the vehicle had shot him, but soon realized the shot came from his own gun.

“I was very fortunate I could get to my phone,” Gilligan said. “The DASO (Doña Ana County Sheriff’s Office) first-responders saved my life. If they waited 10 more minutes I would’ve died. I lost so much blood. I know I actually passed to the other side just before getting to the hospital but they were able to revive me through CPR and bring me back. I have so much appreciation to the doctors and first-responders who saved my life.”
Source: ElpasoTimes 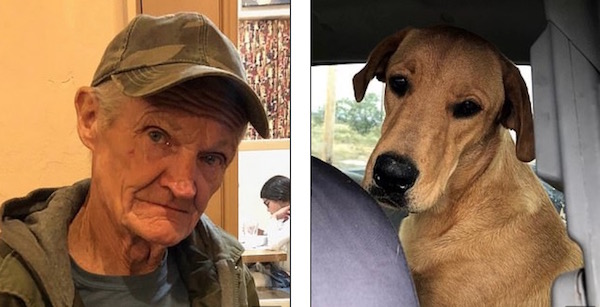