Céline Dion is getting some flack for her ugly new children’s clothing line, and it’s coming from High Places.

The iconic (Canadian) singer has joined with two feminist fashion designers to create  CÉLINUNUNU, a line of ‘trendy boutique’ clothing for children. The ‘fierce female forces have created a new children’s clothing brand that breeds equality and freedom of spirit, serving as a platform for a new humanistic education.‘

There’s only one reaction to that lofty goal:

But don’t get ahead of me, you haven’t even seen the craptastic designs yet.

The website thoroughly explains the vision of CÉLINUNUNU — to ‘liberate children from the traditional roles of boy/girl‘ and enable them to ‘grow on values of equality‘ and ‘strengthen their own power of personality based on mutual respect.’

Because you apparently can’t do that while wearing jeans and a t-shirt.

The brand flows on the axis between the values of education and empowering dialog. We believe that an educational experience is possible through children’s clothes, because fashion builds concepts deep within our minds and changes thought patterns. It can create equality, and grow the emotional intelligence that drives the practice of responsibility, freedom and flexibility of thought.

People, and for that matter – little humans, express themselves through clothes. We would like to enable them to be who they are, so that their choices are driven by their own true essence and free spirit, beyond stereotypes or any norm.

Freedom of thought as long as that doesn’t mean traditional gender roles or ‘stereotypes’.

The dialogue between clothes and creativity/art amplifies the discussion about a humanistic education, which is gender-free, strengthens the power of personality, and gives the spirit space to grow. This is the education that fashion can instill, based on the concept of equality and respect for humankind.

CELINUNUNU empowers these forces of creativity and imagination, inspiring the freedom of the spirit and an empowering dialog for all.

Because everything is possible, equally.

Um, no. These are just ugly, overpriced, Goth-style clothes. The main colors used are black, white, and grey. The logo is a plus sign. That’s empowering the forces of ‘creativity and imagination’. Really? There was literally more ‘creativity’ imposed on artists in Soviet Russia than in this clothing line.

I have no freaking idea.

Near as I can tell, Céline Dion blew some Voodoo glitter and cursed an entire nursery full of babies to wear ugly clothes for the next 14 years.

And I’m serious, these are some freakishly ugly clothes. 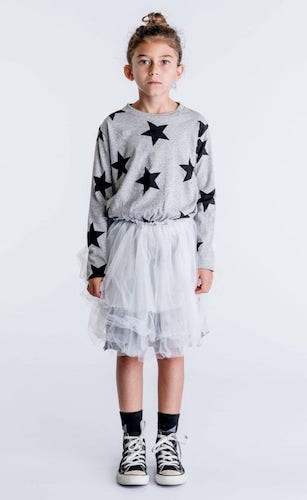 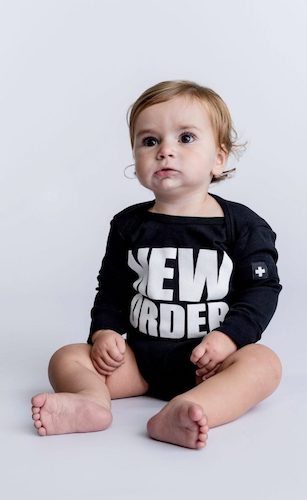 Because this isn’t about propaganda, you guys.

The oh-so child-friendly imagery of creepy skulls for a mere $101: 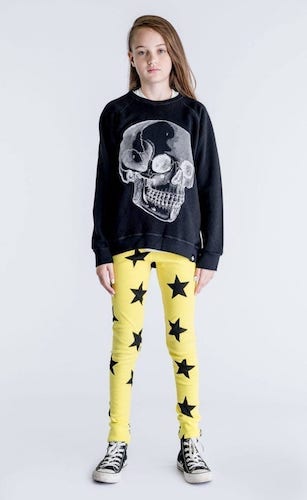 A toddler playsuit with skulls all over it available in both black with white skulls or white with black skills for the low, low price of $92. 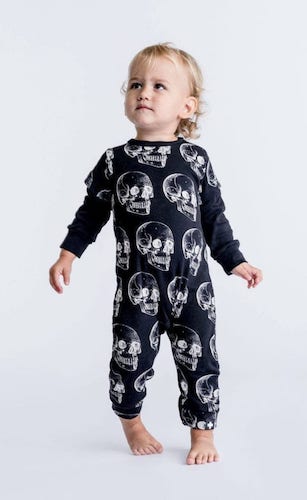 You can even buy a matching blanket for $119.

You can prep your kids for their first Antifa riot with this $89 ‘Ninja’ shirt: 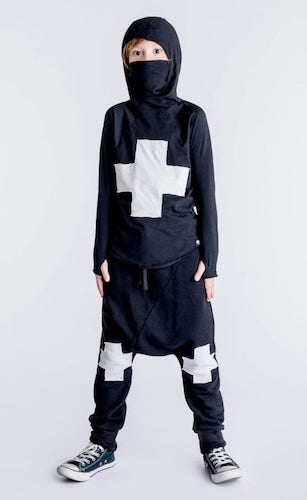 And yes, you can get those hideous MC Hammer-style pants for a measly $99.

(Don’t worry, I’m sure that you can make that up by looting a Starbucks during the next Antifa ‘protest’.)

Other than the mockery dished out by the shocking hideousness of the line itself, Dion is being criticized for the philosophy behind it. One of those critics is a Catholic priest who has been a priest for 65 years and an exorcist for 40 of those years. Monsignor John Esseff spoke with Patti Armstrong who wrote a blog post about the line in the National Catholic Register last week. In the article, Msgr. Esseff warns about the ‘mindset’ behind the clothing line.

“I’m convinced that the way this gender thing has spread is demonic,” he said. “It’s false. I don’t even know how many genders there’s supposed to be now, but there are only two that God made.” The demonic dimension of creating such a clothing line is very deep, according to him.

“The devil is going after children by confusing gender,” he said. “When a child is born, what is the first things we say about that child? It’s a boy, or it’s a girl. That is the most natural thing in the world to say. But to say that there is no difference is satanic.”

To take away the male or femaleness of a baby is hitting at the very heart of nature by denying a simple truth of the way that child was created, Msgr. Esseff explained. “People behind this are influencing children to disorder,” he said. “This is definitely satanic. There is a mind behind it—an organized mindset.

“The devil is a liar and there are huge lies being told,” Msgr. Esseff said. “This is being done for money, and there is divisiveness that comes from this—marks of the devil.”

…“The evil one feels that he can do these things without somehow being recognized behind it all,” he said. “This [gender neutrality] is a ploy he has. It is being driven by an agenda because there is a spirit behind it.”

I think that he’s absolutely right.

His statement reminds me of this verse:

Woe to those who call evil good and good evil, who put darkness for light and light for darkness, who put bitter for sweetand sweet for bitter!

We have moved with mind-boggling speed from addressing children as ‘boys and girls’ to 112 genders (and still growing) while asking what pronouns they want to be addressed by. It’s especially shocking since the people that this affects is just a fraction of a tiny sliver of the general population. The demand is that the majority must alter definitions of gender that we have literally used for millennia because approximately one half of one percent of people in the United States identify as transgender and would have their feelings hurt for being ‘different’ is ridiculous.

I cannot even imagine how devastating it would be to have confusion about something so fundamental as gender to your own self-perception, and I have a lot of compassion for those that are struggling with gender dysphoria. That said, I’m not a fan of the demand that we all alter our own sense of reality to conform to someone whose understanding of male and female is confused.

Men are men and women are women. Studies on monkeys have revealed that there is a biological reason rather than just a social one that boys and girls choose the toys that they do.

It’s going to be interesting to see the reaction to this clothing line by the various factions on the left.

Good luck with that, Céline.

And good luck selling the fugly $249 coat that looks like one side is made from a black garbage bag and the other is a space blanket.